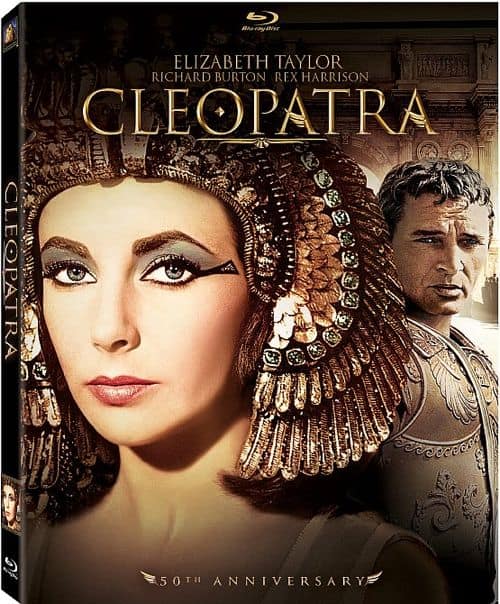 Twentieth Century Fox Home Entertainment is proud to announce that the four-time Academy Award® winning* classic CLEOPATRA, will be released on Blu-ray Disc for the first time May 21 in a special golden anniversary edition and is available for pre-order at major retailers.

In honor of the iconic film’s 50th anniversary, the 243-minute premiere version of CLEOPATRA has been meticulously restored and presented on Blu-ray for a stunning high definition in-home viewing experience. Artfully packaged with a full-color book featuring rare images from the making of the film, the 2-disc Blu-ray edition is packed with dazzling bonus materials featuring never-before-seen exclusive content including Cleopatra’s lost footage, commentary from Chris Mankiewicz, Tom Mankiewicz, Martin Landau and Jack Brodsky, behind-the-scenes featurettes, and more. Additionally, fans can watch footage from the film’s original theatrical premieres in both New York and Los Angeles.

To kick-off a global celebration commemorating the film and its special edition Blu-ray release, Richard Burton will receive a posthumous star on the Hollywood Walk of Fame today, Friday, March 1. Burton’s star will be placed next to Dame Elizabeth Taylor’s, honoring one of the most famous theatrical relationships and greatest love stories in history. The campaign for Burton’s star was spearheaded by the Royal Welsh College of Music & Drama to celebrate the actor’s heritage.

Directed by Academy Award winner Joseph L. Mankiewicz, the historical epic shot on 70mm film was the highest grossing film of 1963, bringing in more than $24 million in its initial release. The film cost an unprecedented $42 million to make (equivalent to over $300 million today) and nearly bankrupted Twentieth Century Fox. In addition to elaborate sets and costumes, production delays and the relocation of principal filming from London to Rome added to the skyrocketing budget. A very public love affair between Taylor and Burton that blossomed during the three-year production meant that there was as much romance and intrigue off-screen as on-screen. The film later won four Academy Awards, and was nominated for five more, including Best Picture.*

The opulence and grandeur of this epic spectacle has never been more glorious, as it comes to Blu-ray for the very first time. This 2-Disc 50th Anniversary Edition includes a collectible book that provides a fascinating behind-the-scenes look at the making of this legendary film.

Elizabeth Taylor stars as Cleopatra, the glamorous and cunning queen of Egypt. To secure her hold on power, she seduces the rulers of Rome, only to meet her match in Mark Antony, played by Richard Burton. Their passionate romance could decide the fate of the world’s greatest empires.