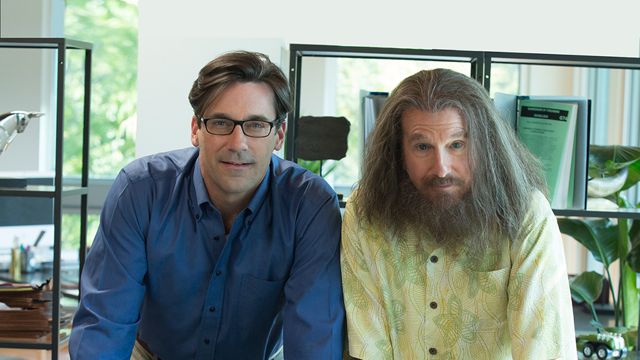 For those missing Curb Your Enthusiasm, HBO recently premiered CLEAR HISTORY. Written by, and starring, Larry David, the tone and humor is pretty much the same, with David inhabiting a similar character. This should tide fans over until David decides to make another season of his well-received comedy series.

The basic premise is of a man named Nathan (David) who gets into a silly argument with his boss, Will (Jon Hamm, Mad Men), leading to Nathan losing his job just before a massive launch of a new car that would have made him a billion dollars. Ten years later, Nathan is living as a drastically different looking guy named Rolly in Martha’s Vineyard, seemingly having escaped his past. That is, until Will shows up on the island, and Rolly begins plotting his revenge.

CLEAR HISTORY is inferior to Curb Your Enthusiasm, so don’t go in expecting an hour-and-a-half episode of the show. David still goes after silly, everyday gripes, but instead of harping on them for thirty minutes, with earlier events coming back full circle, most are dealt with in thirty seconds and then dropped. This is a shame, as there is certainly ripe material here that could fill many installments of Curb, wasted as throwaway gags.

What I don’t buy is that Rolly is considered the nicest guy around. At first, he seems to have turned over a new leaf, not harping on the little things that Nathan used to. But throughout the movie, Rolly makes more enemies than friends, and loses a few chums along the way. Has he turned just because of Will’s presence? It seems doubtful, especially as no character makes that observation.

The ending is contrived, and while a few threads seem to tie together, they don’t play into the final scenes, ruining the setup. Also, the story just can’t decide what it wants to be. For large stretches of the running time, it is a cohesive tale, but then it sometimes falls apart into a series of bits, and the ending is far from satisfying or complete. That is probably the biggest weakness of the project.

Which is not to say CLEAR HISTORY isn’t enjoyable. There are some brilliant turns by wonderful comedic performers, and those alone are worth tuning in for.

The most stand out performance is that of Liev Schreiber (Ray Donovan) as Tibor, the Czechoslovakian man who sells Rolly an ignition switch, and then gets in a car wreck with him. Tibor’s look and accent are humorous, but it’s more the absolute confusion that he has towards Rolly, not understanding what’s going on when Rolly is involved, and not getting why Rolly isn’t afraid of him, that plays so darn well. Sadly, it is an uncredited role, as Schreiber stars in a series for a rival pay channel.

Among the rest of the cast are familiar faces like Michael Keaton (Batman, Toy Story), J.B. Smoove (Curb Your Enthusiasm), Amy Ryan (The Office), Bill Hader (Saturday Night Live), Danny McBride (Eastbound & Down), Eva Mendes (Hitch), Amy Landecker (Dan in Real Life), Patty Ross (The Heat), Paul Scheer (The League), Chicago (the 25 or 6 to 4 band), and many more. Each, without fail, not only fits well into this contrived world, but does an outstanding job of selling the scenes they are involved in. They are not the weakness of the piece, and each is not only funny, but also seems to be really glad to have this job, a definite plus.

A particular element I really enjoy is that of Will’s wife, Rhonda (Kate Hudson, Glee, Almost Famous). At first, she seems a pushover whom Rolly can worm his way in with. But the direction the script goes with her as things play out not only fits with her character nicely, even after a few turns, but also rises above the predictable and expected.

Overall, while not as impressed with CLEAR HISTORY as I have been with other David works, it is a nice little snack as we await his next great project.