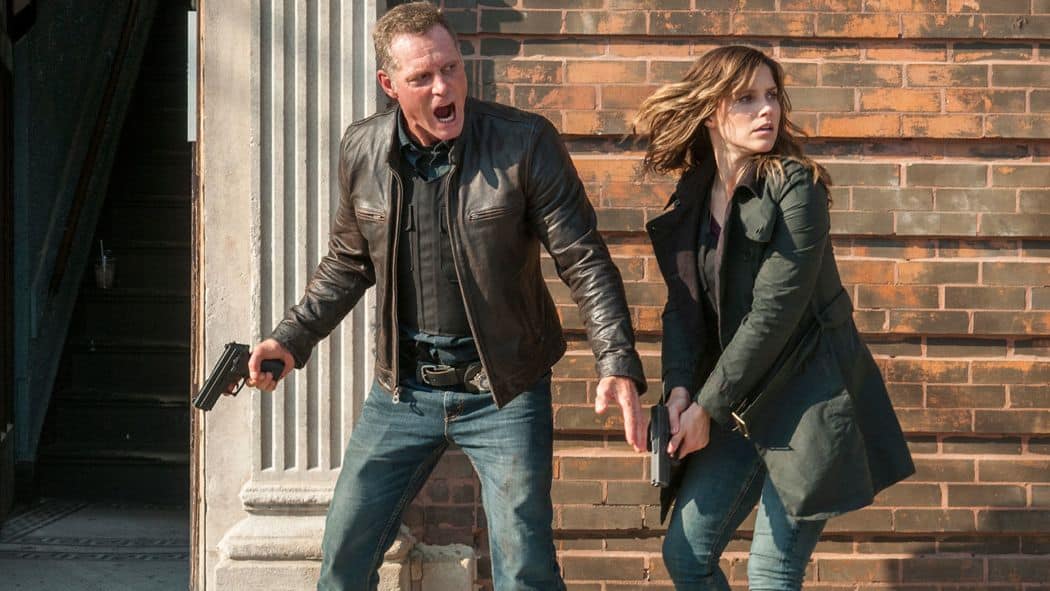 For those of you who read my reviews even semi-regularly, you likely know that I am against procedural dramas, and have often railed at the overstuffed crime genre. So it may surprise you to learn that I enjoy NBC’s CHICAGO P.D. A lot, and am looking forward to watching it on a regular basis.

CHICAGO P.D. is a spin-off of Chicago Fire, and features several recurring characters from the mother ship, now in a main cast member role. Sergeant Hank Voight (Jason Behge), Detective Antonio Dawson (Jon Seda), and Detective Jay Halstead (Jesse Lee Soffer) are already very familiar to viewers, having appeared in sizable arcs and many installments. Other cops that were in Chicago Fire only once or twice are included, too, although not every police officer in that series is in CHICAGO PD. In fact, some people set up for this spin-off are no longer involved, which one doesn’t really notice because the cast that is present is full and enjoyable.

Besides those mentioned above, the pilot introduces us to Detective Erin Lindsay (Sophia Bush, One Tree Hill), who has a past with Voight, Adam Ruzak (Patrick John Flueger, The 4400), an eager newcomer, Alvin Olinsky (Elias Koteas, The Killing), who can get things done, Officer Kim Burgess (Marina Squerciati, Gossip Girl), who may not be as much of a pushover as she first seems, Sheldon Jin (Archie Kao, CSI), the tech guy, and others.

Like Chicago Fire, CHICAGO P.D. is must more focused on the characters than the crimes, which is the key thing that sets it apart from its peers, and the main reason I am tuning in. The first episode immediately sets about fleshing out all of the people above (plus other characters), giving them varied personalities and backgrounds. These should clash in interesting ways as the series goes on.

CHICAGO P.D. is not quite a soapy as Chicago Fire (which my wife fittingly refers to as Grey’s Anatomy: Firefighter Style). In the initial hour, there is a major crime lord who the good guys are after. But while he is being hunted, there are lots of great interactions between characters, setting up the overall dynamic, and these overwhelm connecting clues in screen time. It’s this mixture that is so important to making the show interesting.

The Intelligence team is bound to be one rife with drama. We know Voight crosses the line a lot, and may just be evil. Even if you haven’t watched Chicago Fire, that much is evident right away. And we know Antonio is a good guy, someone concerned with what is right, and a man who is not afraid to stand up to those who are selfish or crooked. Add a bunch of other ingredients to the mix, and it’s unlikely the main group will be stagnant, as is often the case in other cop shows.

There’s also an incredibly cool twist late in the episode that kind of sets the tone of what CHICAGO P.D. will be. It is a similar plot device to what Chicago Fire had in its pilot, but carried out in a different manner to make an even bigger impact, and one sure to have lasting consequences. In fact, I dare predict that this show will have many long arcs, and a criminal will not be brought to justice every week. At least, that’s the hope, and the early signs are good.

If you are a Chicago Fire fan, the connections are present very strongly in the pilot, which should help CHICAGO P.D. retain the same audience, at minimum. Gabriela (Monica Raymund) is there, of course, being Antonio’s sister, but so are Shay (Lauren German), Otis (Yuri Sardarov), and Hermann (David Eigenberg), as well as Molly’s, the bar. I hope more of these cross overs occur frequently, since both series are set in the same place and time, giving more opportunity for such things than other spin-offs usually have.

In short, the first hour is excellent. It’s got enticing performances, a terrific cast, and an interesting story, with hints of good things to come. CHICAGO P.D. premieres Wednesday at 10 p.m. ET on NBC.