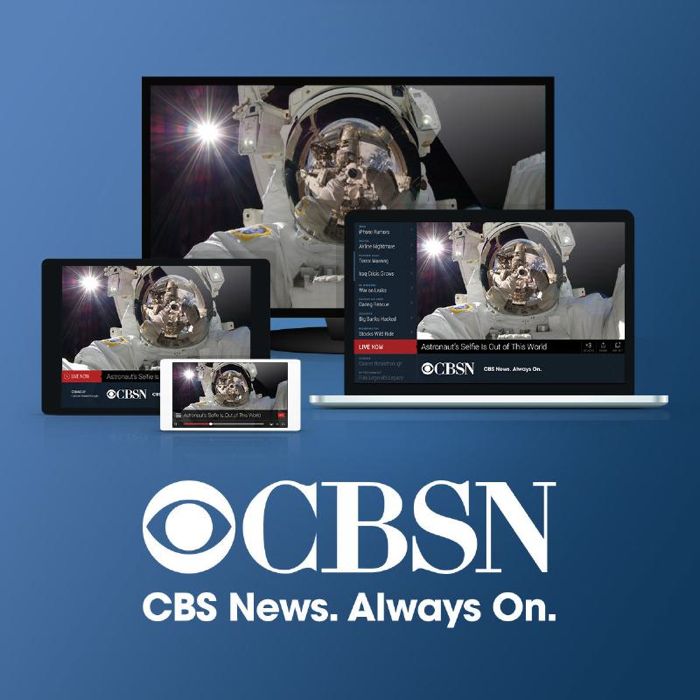 CBS News and CBS Interactive today launched CBSN, the first digital streaming news network that will allow Internet-connected consumers to watch live, anchored news coverage on their connected TV and other devices. At launch, the network is available 24/7 and makes all of the resources of CBS News available directly on digital platforms with live, anchored coverage 15 hours each weekday.

“CBSN is an important example of how CBS is able to leverage the unique strengths, talent and competitive advantages of its businesses to create exciting, highly competitive new services that meet evolving audience preferences for content consumption,” saidLeslie Moonves, President and CEO, CBS Corporation. “There’s a tremendous opportunity on these platforms for a true round-the-clock newscast. We’re confident this service will appeal to both traditional news consumers and a whole new set of viewers.”

CBSN will be available on CBSNews.com and its mobile website, key connected TV devices including Amazon Fire TV, Roku players and Roku TV™, and others, as well as the newly launched CBS News app for Windows 8/8.1 and Windows Phone 8/8.1 available through the Windows Store and Windows Phone Store. CBSN will also be available on the CBS News apps for Android and other leading platforms before the end of the year.

The network features a 60-minute format delivering live, updated news content from 9:00 AM – midnight ET every weekday at launch, and it takes advantage of the interactivity of digital platforms through a unique video player and on-screen interface. It gives viewers the full flexibility within each hour to control what they watch and when they watch it via DVR-like functionality that allows them to watch previous segments and jump back into live programming seamlessly and across devices.

Features of the network will include:

CBS News, a pioneer in broadcast journalism since the earliest days of radio and television, is utilizing its award-winning newsgathering and reporting to redefine it for the digital age. CBSN offers original, up-to-the-minute coverage of national and global stories with dynamic on-demand video content, including video from CBS News’ extensive archives to add context and perspective. Viewers will have immediate access to breaking news reports, feature stories and interviews from among the most experienced teams in video journalism.

“CBSN demonstrates our continued advancement in the digital space, as we extend to new platforms and a wider audience,” said Jim Lanzone, President and CEO, CBS Interactive. “We are developing original content exclusively for online, connected platforms in a true interactive format that viewers can control, allowing them to lean back or lean in to the segments and stories that interest them.”

CBSN will be an ad-supported network across all platforms. Inaugural sponsors include Microsoft and Amazon. Other advertisers will also run in the service on all devices.

The live, linear stream will be led by both veteran and new CBS News correspondents.