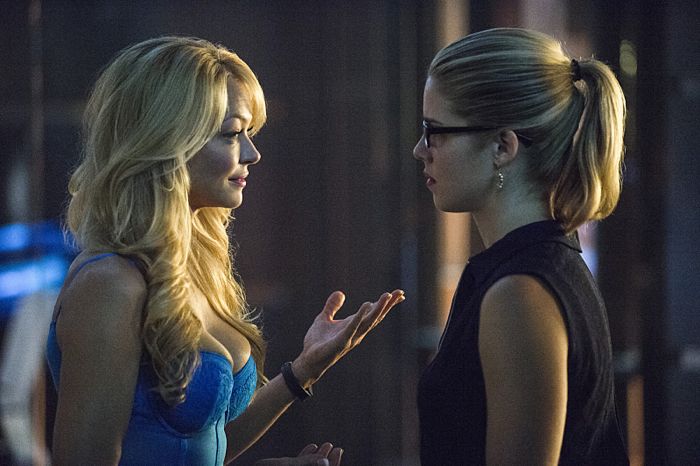 This week’s installment of the CW’s ARROW, “The Secret Origin of Felicity Smoak,” finally reveals a bit of Felicity’s (Emily Bett Rickards) backstory as a mistake from her past threatens the city. We also meet her mom, Donna (Charlotte Ross, NYPD Blue), who is visiting town in the present day, shedding light on why Felicity is the way she is. It’s an enjoyable look at a character finally getting her due.

I often find ARROW spends too much time on its lead. Oliver (Stephen Amell) may be the title character, but the frequent glimpses of him during his missing five years have become stale and forced. It is an essential part of the series’ structure, but it doesn’t have to be. Giving others, such as Felicity, a turn with the focus makes for something fresh and welcome. I wish ARROW would do more episodes like this one, which, while not serving the greater mythology all that much, is one of the most enjoyable of the season so far.

The hour begins with three training montages of various combat techniques, then flips over to Felicity, doing a few sit-ups in her apartment. This is designed to display the contrast between the show’s many warriors and its ‘normal’ person, an effective way to highlight how different Felicity is. She’s part of the team, yes, but she’s not a part the same way as anyone else, giving her unique value that cannot be overlooked.

That commentary would be enough, but her morning quickly morphs into laugh-out-loud comedy as her boss, Ray Palmer (Brandon Routh), bursts in to find her in a rather embarrassing state of early-morning-mess. Then, Felicity’s mother shows up out of the blue, meeting Ray and generally adding to the chaos. It’s hilarious and a good way to use Felicity, who is much more than comic relief, but can clearly be that, too.

From there, “The Secret Origin of Felicity Smoak” takes a turn into a more dramatic arena. We see Felicity during her goth / hacktavist phase in college, hanging out with her boyfriend, Cooper (Nolan Gerard Funk, Glee), and his roommate, Myron (Matthew McLellan, Tied). This is a rather tragic tale, Cooper ending up in jail and presumably killing himself, which leads Felicity to clean up and go straight, becoming who she is. Which is a kickass, strong woman who can take care of herself when captured by the not-dead Cooper, who is using Felicity’s custom-made virus against the city.

It’s hard to imagine the Felicity of season one disarming Cooper and knocking him on the ground, indicating there has continued to be transformation past the college days, Felicity’s personality not fully decided in the flashbacks. She has benefitted from working for Team Arrow as much as Team Arrow has benefitted from her skills. She has really come into her own, and while I don’t see her going superhero anytime soon, she’s an independent lady who deserves attention and respect.

Bringing Donna into the episode further deepens our understanding of Felicity. Donna can’t see herself in her daughter, and it’s true, there are many differences. But Felicity loves her mother and does get something from her, a revelation Felicity relays to Donna in an emotional scene. All around, excellent episode for the character of Felicity.

While Felicity is the main meat of the episode, there are other subplots. Oliver moves in with Thea (Willa Holland), making steps towards repairing their sibling bond, though Malcolm Merlyn (John Barrowman) doesn’t seem happy about it, likely not wanting Thea to rely on anyone but him. Laurel (Katie Cassidy) struggles with her anger issues and finally talks to Ted (J.R. Ramirez) about what’s bugging her, so she may finally begin to heal as Ted helps her channel her anger into something productive. And Roy (Colton Haynes) is revealed to be Sara’s killer.

This last thing is not straight-forward. The action goes totally against the person Roy is. Was he being mind-controlled? Are these implanted, false memories, and he didn’t do it? There are a number of possibilities, but there is no way Roy knowingly murdered Sara, so that’s an enticing mystery begging to be solved.

“The Secret Original of Felicity Smoak” is far from perfect. While the main plot and subplots are solid, there are flaws in the episode, small ones, but numerous. Why does Felicity ask her mom where the baby is when she already sees her mom without the baby prior to that scene? Why is Diggle back in the field when he said he didn’t want to be? Why is he wearing a dumb ski mask? Isn’t Ray going to say anything about the number of days Felicity takes off? There are plenty more things besides these, some genuine flubs and some just strangeness, but unfortunately, combined they drag down the quality a little bit on a very entertaining series.