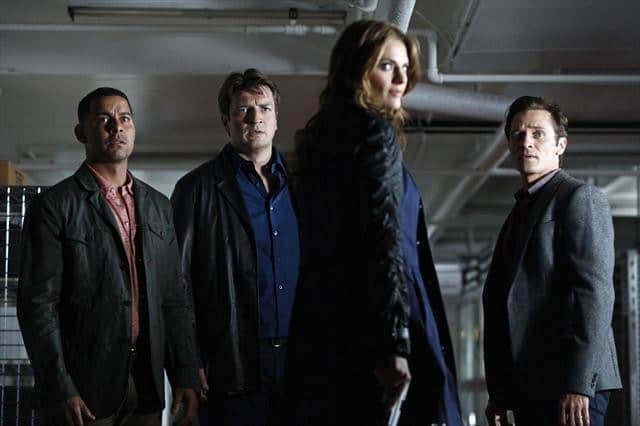 CASTLE begins season five much in the same way that season four ended. In fact, the action picks up the morning after last spring’s finale, which is probably why the premiere is titled “After the Storm,” a reference that could apply to the confrontation at the station going down, or the alter ego of the fictional Nikki Heat finally falling into bed with the man behind Derrick Storm.

“After the Storm” begins on a light note, Castle (Nathan Fillion) and Beckett (Stana Katic) almost being caught in bed together by the early return of Martha (Susan Sullivan) and Alexis (Molly C. Quinn). This scene nearly repeats soon after at Beckett’s apartment with Ryan (Seamus Dever). Beckett and Castle have a warm connection that begs to be handled in a fun way, and this episode delivers that.

What can be said about the new couple’s decision to sneak around, rather than let family and friends in on the fact that they finally hooked up? Is it immaturity, as Beckett (not unjustifiably) accuses Castle of? Or is it embarrassment, as they both ask the other? I don’t think it’s either. I think that Castle is sincere when he says he’d like to keep her for himself just a little while longer. Given Beckett’s lack of enthusiasm for public sharing, it’s not so surprising that she agrees.

Letting the leads of a series get together always carries a risk. After the disaster that was Moonlighting, dramas that are about more than sex have been a bit gun-shy in pulling the trigger. However, Chuck and Fringe did it just fine, and Bones hasn’t suffered any negative backlash. Perhaps these success stories are what finally prompted CASTLE, four years in, to try making the move themselves.

The important thing to maintain after getting those characters together is the chemistry. If sex changes the witty banter and tension between them, it can ruin the moment. Unless the relationship develops into something much deeper than before, which can keep things interesting. CASTLE has chosen the former option, allowing Beckett and Castle to trade their barbs as usual, which not only means they will be able to keep their secret from their loved ones for awhile, but also allows CASTLE to not change its formula very much. This is probably wise for now, though eventually, should the show continue more than another year or two (a very likely possibility), there will have to be some shift to here the romantic feelings become more than just playful.

Romantic affection isn’t the only type to be found in “After the Storm.” Esposito (Jon Huertas) and Beckett remain suspended from the force, leaving Ryan to try to work the case of who killed Beckett’s mother on his own. He quickly realizes that’s not going to fly, and recruits Beckett and Castle to help him out. When the three discover that Esposito has been chasing his own leads, they come together, despite lingering tension between Esposito and Ryan.

At first, CASTLE was a two person show about the titular male lead and his professional partner and inspiration, Detective Kate Beckett. As the years have gone on, though, Ryan and Esposito have slowly become more developed as characters. “After the Storm” features both on their own, showing off their cop skills, as well as revealing the deep loyalty they still feel towards Kate. This team mentality is not only inspiring, it will likely be the norm going forward, as it should be.

Gates (Penny Johnson Jerald) may not seem the fuzzy type, but she would like in on some of that love. She doesn’t say so explicitly, but she does get to give a peek at a side of herself we haven’t seen before, praising Beckett for her loyalty to Montgomery, and expressing hope that she may one day be seen in the same light. It’s a touching moment, more than a throw away, and at the time, Gates seems like she may deserve it. True, she’s tough, and refuses to let Beckett and Esposito cut their suspension short (providing an excuse to skip a few months to account for the summer before next week’s episode). But that doesn’t make her a bad guy.

Yep, status quo is not quite restored at the end of “After the Storm.” But it soon will be. It’s kind of a shame because this is the opportune time to shake things up. Beckett and Castle getting together is some movement, but the placement of Beckett’s mom’s case on the back burner once more is disappointing. It will probably be a series-long arc, but knowing that doesn’t make it any better. Ah, well. This is the curse of the procedural.

Overall, CASTLE returns with charm and humor intact, wonderful guest stars like Jack Coleman (Heroes, The Office), Geoff Pierson (Dexter, 24), and Tahmoh Penikett (Dollhouse, Battlestar Galactica), and a thrilling, action-packed piece of mystery for it’s newest hour. For a case-of-the-week crime show, that’s about all a fan can ask for.