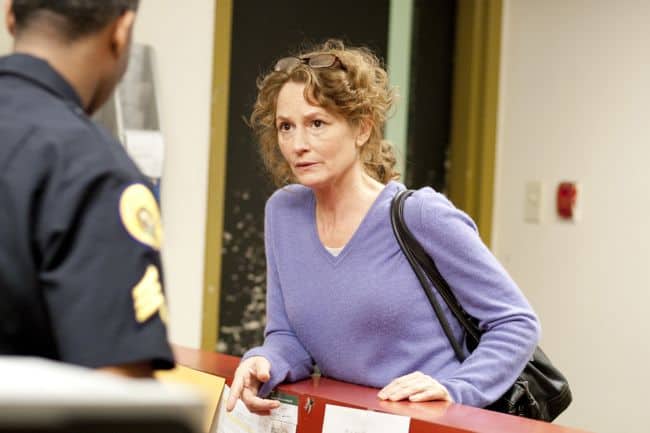 HBO’s TREME returns this week, more than a year after the last season finale, taking us back to the music district of New Orleans, this time beginning twenty-five months after the flood. It’s a city that is starting to look rebuilt, but still has a long way to go. Some of its residents continue to live in FEMA trailers that are making them sick, while greedy contractors restore only the fronts of homes. The police clash with musicians, not allowing them to play for a funeral.

TREME is about a lot and nothing, all at the same time. Most episodes, including the season three premiere, “Knock With Me – Rock With Me,” don’t have a ton of plot. A few things will happen, but most don’t matter all that much on a large scale. On the other hand, it beautifully paints vivid pictures of specific individuals, and through them, we get a larger impression of the community. It’s case-study history set near the present time, and is done extremely well. Which is why it doesn’t matter if not a lot happens; we keep tuning back in to it.

Let’s start with a positive. Chief Lambreaux (Clarke Peters) has his groove back thanks to his son, Delmond’s (Rob Brown), new album. It’s a completely new style of melody that clearly comes from an area steeped in musical history. It isn’t universally adored, but it gets some praise from those who understand what an innovation it is. Lambreaux doesn’t really care about any of that. He just loves hearing his people’s songs on the radio. He is full of a happiness we don’t often see in him, and that’s heartening after two years of suffering. In this case, the individual is more important than the masses. What TREME fan cares if the record does well or not after seeing Lambreaux brag to his co-workers?

Davis (Steve Zahn) is also in a good place. He’s making things happen, starting concerts, recruiting legends, and he gets to play whatever he wants on the radio. He may not have as much time as he’d like for girlfriend Annie (Lucia Micarelli), but she seems to understand, busy with her own debuts. Are they the new power couple, that will become infamous in their city? Or will the pressures of being pulled in so many different directions split them up? The latter is what we’d expect, but in this first episode, at least, it seems the former is more likely. They are the faces and voices of new New Orleans.

These tales of promise are needed, considering the other, troubling things going on around them. Not everyone has bounced back as solidly as these people have. The world at large seems to have forgotten about New Orleans. This is made crystal clear when Davis leads a tour of great music sites, almost none of which actually exist anymore. Even a park has its gates locked, unable to be fixed up twenty-five months after the destruction. No one is in there working on it. It’s been given up on, like so many other places and people.

This kind of treatment of New Orleans is why some of its residents have moved on. Janette (Kim Dickens) sells her home down south, fully committing to her life in New York. She is doing very well in the Big Apple, so it seems like a logical decision to make. But as she falls into bed with Jacques (Ntare Fuma Mbaho Mwine) and happily reunites with Davis, one begins to wonder just how weak the siren call of her hometown has actually gotten. She has a good life elsewhere. But there’s no place like home.

Sometimes home has changed, though, and one can never go back to the way things were. The police certainly have something to say about that, arresting a couple of horn players for trying to honor their fallen comrade with a traditional street memorial. This is something that would have been unthinkable a short time ago, especially in the Treme district. They have all the power, and there’s little the musicians can do besides shame them.

Yet, shame can be a powerful motivator, especially when public favor turns against the cops, and it isn’t long before this particular tradition is restored.

Batiste (Wendell Pierce) would once have been a part of the protest. Instead, he holds his tongue, but not his finger, which leads to a totally wasted (for his reputation) arrest. After the smoke clears on that, viewers are left with a different Batiste than we’re used to seeing. He has matured. He has other considerations besides his pride. And as much as it might upset him that he is not quite what he wants to be, or not recognized for his accomplishments, he also understands the wisdom in keeping his mouth shut.

Is this growth for him, or, once again, a microcosm of the larger landscape, with residents returning to their lives, not able to keep fighting if they want to have a relatively peaceful existence?

There are a lot of characters in TREME, and this episode manages to check in with just about all of them. Many of the ones I haven’t mentioned are no less important than the ones I have. Yet, like the series, it’s daunting to try to tell the whole story, so I’ll let representatives stand for everyone else. Suffice it to say, the show is still in top form, and as compelling as ever.

TREME returns to HBO this Sunday.