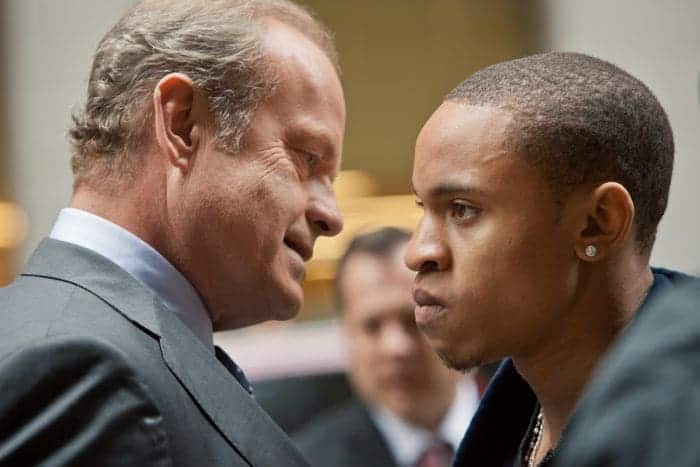 Starz’s BOSS returns for a second season with “Louder Than Words.” What words is this title referencing? Each episode title of season one was a single word. Perhaps this title is supposed to represent something more? Something bigger?

If so, I wouldn’t say that’s exactly accurate. “Louder Than Words” continues the story of Tom Kane (Kelsey Grammer), picking up soon after it left off. While there are some important differences, mostly concerning power vacuums that must be filled, I would not say that this season two begins in a dramatically different way than season one played out. It maintains the same quality and suspense, pleasing the fans who are already addicted to the heady drama.

Or, as many season one titles do, it could refer to a specific moment within the episode that stands out. In this case, the climatic finale when (SPOILER!) someone decides it is time to take action to bring Tom down, shots ringing out at an important event, the groundbreaking ceremony for the O’Hare project. Tom escapes unharmed, but might his wife, Meredith (Connie Nielsen), have been hit?

Who shot at Tom? The obvious answer is Darius (Rotimi Akinosho). After all, Darius is angry that Tom put his own daughter, Darius’s girlfriend, Emma (Hannah Ware), behind bars. Darius is also shown looking at a gun. There is motive, opportunity, and foreshadowing of such an event. Which is probably why it wasn’t him, because this answer is too obvious.

Interestingly, “Louder Than Words” ends with a shot of Mayor Rutledge (Anthony Mockus Sr.) watching events on the news. This could be a very important clue. Earlier in “Louder Than Words,” Meredith made sure that the news was turned on for her father. Might she be trying to take out Tom, and got caught in the crossfire herself? Or Tom figured out the move and circumvented it? It is unlikely Tom is trying to send Rutledge a message, as Rutledge is in no position to do anything, and Tom’s visits to his father-in-law appear to be done with fondness. But Meredith has reason to believe that Rutledge might feel wronged by Tom, so this could be her way of delivering her dad his revenge. Though if it is, she failed.

Another suspect is Alderman Ross (James Vincent Meredith), who has dropped out of public life. After learning that his wife cheated on him, then punching Tom out in public, Ross has fallen from grace. Rather than persevere, he skips council meetings and hides from sight. The one scene Ross gets in “Louder Than Words” is supremely creepy, and shows a man on the edge. He is certainly capable or heinous acts.

There is also motive for Ross, or one of the other council members. Tom is trying to push through a legislative bill that is very divisive. Ross would not want this bill to pass, even if it seems like he cares about nothing. Or another Alderman could be trying to stop the bill, taking matters into their own hands, since the men previously pulling the strings in the chamber all seem to be suddenly gone.

The only certainty about the shooting is that there is a mystery, and one that might take awhile to play out.

Will Tom be shaken by the near miss on his life? It’s hard to say. He is already facing imminent death, so it seems unlikely that being shot at would bother him that much more. He knows that these are his final days, and does what he can to leave a great legacy, pushing pet projects through, rather than being content to wait around and let them play out, as he has in the past. He may only redouble his efforts, lending even more urgency to his mission.

Unfortunately, Tom is running out of time. Dr. Harris (Karen Aldridge) tells him the disease is progressing rapidly. Mona Fredericks (Sanaa Lathan) is assuming Ross’s mantle and gunning for him. Debra (Jennifer Mudge) is still alive and could expose Tom’s attempt to strangle her. Zajac (Jeff Hephner) is getting restless about the lack of support from Tom. Cullen (Francis Guinan) still holds a grudge, as evidenced by his treatment of Zajac. Kitty (Kathleen Robertson), a jaded employee, may agree to conspire with the persistent newsman Sam Miller (Troy Garity), to expose Tom’s dark secrets. Add these threats to the list of likely shooters, and Tom’s enemy list is long, indeed.

However, as Meredith tells Zajac in season one, do not underestimate Tom Kane. The challenges to his position are numerous and frequent, and yet Tom continues to stay on top. As season one ended, it looked certain he would crumble, but he still stands. No matter how many angles they come at him, he weathers it all.

The question is, how long can Tom continue to do so, given his declining health? His hallucinations of Ezra (Martin Donovan) and continuing bumbling speech patterns betray his weakness. For now, Meredith is the only one alive in the inner circle that knows about Tom’s illness, having finally gotten it out of Emma. But it won’t stay buried forever. Whether Tom does himself in, or his foes finally find that chink in his armor, he will come tumbling down. This is not underestimation; this is reality. The draw of BOSS is watching to see just how long it takes for that day to arrive.