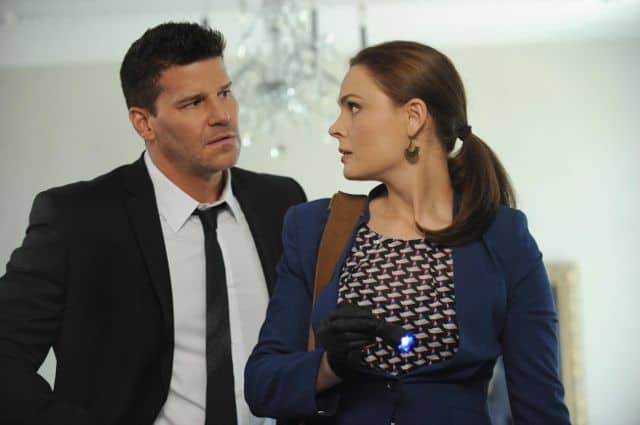 Fans of FOX’s BONES have had a very long summer. Last season ended with Booth (David Boreanaz) calling off his engagement to Brennan (Emily Deschanel) because of a threat made by Pelant (Andrew Leeds). Now, three months later for the characters, and even longer for the viewers, we finally get to see what the fallout from that is in “The Secrets in the Proposal.”

Surprisingly, Booth and Brennan are still living together. Yes, they have a daughter, Christine, and she is certainly a factor in that decision. However, the fact that Brennan hasn’t dumped Booth yet, sticking around even after he cancels their wedding, reveals the depth of the emotion between them. They are not just a couple casually dating; this is real love, the kind that cannot be killed off by a psycho’s manipulation.

At least, for now. Brennan is getting tired of waiting for an explanation, and feels like Booth has been pulling away from her. Booth has a good reason to be avoiding his home, feeling guilty for hurting Brennan, and pouring his energy into looking for Pelant so he can end this pain, but she doesn’t know that. As such, Brennan feels like he may be done with her, and as hard as that is for her to accept, she considers moving on.

Booth is isolated from everyone. Boreanaz does a terrific job of showing us just how much Booth wants to confess the truth to Ms. Julian (Patricia Belcher), Sweets (John Francis Daley), Angela (Michaela Conlin), Cam (Tamara Taylor), or especially Brennan herself. All of these people are judging Booth and are not happy with his behavior. He is basically shunned from his social circle, which has to compound his pain ever more.

So it’s not surprise that Booth turns to someone completely unconnected with the situation to spill his guts to. This person is Aldo Clemens (Mathew Zickel, Newsreaders, House of Lies), a former priest and army buddy who now owns a bar. Away from electronics that might be spying, Booth can tell Aldo the truth, something Booth desperately must get off his chest. And Aldo listens with a kind ear, giving Booth the outlet and support he needs to keep going.

It’s disappointing that Aldo is someone who comes out of nowhere; it would be nicer if he had been mentioned or we’d seen him before. But at the same time, the role he plays must be someone completely out of left field who has no connection to Brennan or the Jeffersonian. As a fan of Zickel already, I am pleased with the new character, who reminds me a little bit of Dr. Gordon Wyatt, for some reason, and look forward to how he will integrate with the rest of the cast as the season plays out.

I won’t spoil what happens with Booth and Brennan, or with Aldo, but suffice it to say, there is definite movement in the relationship story in “The Secrets in the Proposal.” Things are not just punted down the road, and fans won’t be made to suffer for weeks as they wait to see what will happen between the couple.

The end of the premiere is a big taunt to Pelant. While the slight at the madmen is not intentional or meant to provoke, it will certainly bring him out of hiding sooner, rather than later, promising a somewhat fast pace for this fall’s larger story arc.

Of course, this being BONES, there is a case of the week in “The Secrets in the Proposal.” A CIA agent is murdered, and despite their personal problems, Booth and Brennan must work together to solve the case. There isn’t anything super special about this investigation, nor would one expect there to be after so many seasons. But it succeeds in being somewhat interesting, and not distracting from the story most fans really care about, so the episode is a good one.

The case also introduces us to Danny Beck (Freddy Prinze Jr., 24, Scooby-Doo), a CIA agent whom Booth is familiar with, and who sort of helps out. Though he is only briefly in the episode, Danny is said to be potentially recurring, so this could be the beginning of another story larger than one hour, something BONES has got to deliver more frequently as it becomes an aging procedural. Even if he only makes this one appearance, though, it’s a treat for Sarah Michelle Gellar fanatics to see her current husband on screen with her one-time-TV-lover.

The reason I watch BONES, while detesting most other similar shows, is because of the chemistry of the cast, and the entertaining way the supporting players interact. “The Secrets in the Proposal” contains some wonderful examples of this draw, such as when Hogins (T.J. Thyne) tries his latest experiment, despite Cam’s protestations, or when Daisy (Carla Gallo) tries to assert that her own failed relationship with Sweets can serve as an example Brennan can aspire to. This is why the show works, even when ithe plot does become rote for weeks at a time, and when combined with the bigger stories in this premiere, it positively soars for most of the hour.

I also liked the cross promotion for new FOX drama Sleepy Hollow, less intrusive than most of BONES’ implanted marketing.

Though, I do not really understand the title of this episode, or how it applies.