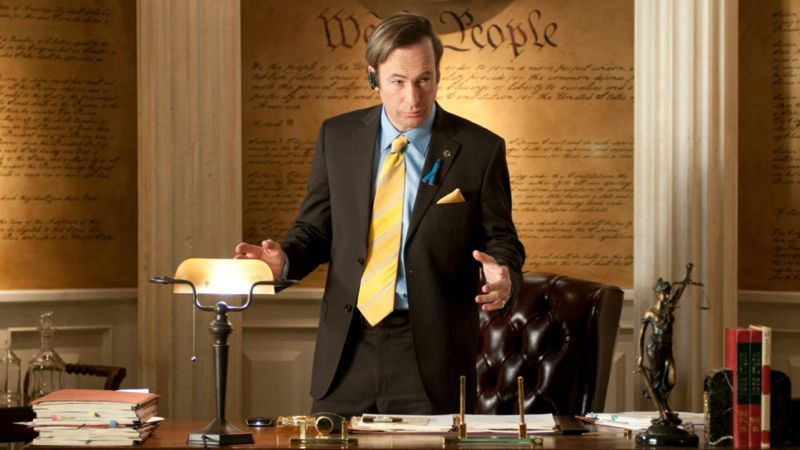 BETTER CALL SAUL doesn’t shy away from its roots. Last night’s series premiere on AMC, “Uno,” begins a little bit after Breaking Bad ended. Saul Goodman (Bob Odenkirk) has relocated to Omaha, Nebraska and is the sad, pathetic manager of a mall Cinnabon. The highlight of his day is going home to his little house, pouring himself a stiff drink, and watching commercials from his glory days. This is where the story ends, and where it begins.

The meat of BETTER CALL SAUL is set six years before Breaking Bad even starts. Saul is known as Jimmy McGill back then, a very unsuccessful lawyer with a crummy office in the back of a nail salon. Desperate for clients, he also cares deeply for his disabled brother, the once-great lawyer Chuck McGill (Michael McKean, Clue, This Is Spinal Tap). Jimmy is at the end of his rope, making very little money representing very cruel teenagers and unable to convince Chuck he should cash out of the thriving firm he helped create.

Jimmy is not as far away from Saul as Walter begins away from Heisenberg, but there is definitely a lot that must happen to turn Jimmy into the sleazy, well-connected “success” he will become. This version of Saul is plenty willing to work outside the law; he just only does so in small ways, and his bravado is much more faked.

I don’t think we can condemn Jimmy for his hatred of Chuck’s partner, Howard Hamlin (Patrick Fabian, Big Love, Veronica Mars). Jimmy thinks Chuck, trapped at home without power because of a crippling disability, is being taken advantage of. Chuck obviously has a big heart, not wanting to hurt the business he built because of how it would affect the employees. But Jimmy sees his big bro as a bit of a schmuck who Howard is pulling one over on. Is Jimmy right, or does he just not have the mind-frame to see Howard and Chuck’s more altruistic viewpoints?

It’s easier to blame Jimmy for what happens or will happen to a pair of young scammers. To try to win a client who is (understandably) reluctant to sign, Jimmy gets the boys to fake an accident. What Jimmy doesn’t know is that this leads them into the den of psychopathic drug dealer Tuco (Raymond Cruz), a place Jimmy ends up as well by the end of the hour. Jimmy may not know who he’s messing with, but he does do something incredibly dumb that gets him and the boys into the situation, so he is to blame.

That makes me wonder how viewers are supposed to feel about the protagonist. Breaking Bad proved you can make a show about a character who is often unlikeable, but there’s something about Saul that makes me care. In Jimmy, this is even more prevalent. He’s the little guy, pushed down, and all his antics are him fighting back against what he sees as a rigged system. This is a sympathetic position, whether he’s right or not.

The style of BETTER CALL SAUL is very reminiscent of Breaking Bad. It is slow burn, with very artistic direction, confusing close-ups, and the very real feel of a larger story than what is being presented. This is by the same guys who did that show, and you can easily tell that, the connections being more than just a character or two.

Joining Jimmy, Chuck, and Howard, the cast includes: Mike (Jonathan Banks), whom fans will remember from the mother ship, and who gets only one (very special) scene in “Uno;” Kim (Rhea Seehorn, Whitney, Franklin & Bash), a lawyer who works for Howard, but seems to at least like Jimmy a little bit; and Nacho (Michael Mando, Orphan Black), a criminal I didn’t notice at all in the first episode, so he may not have shown up yet. This seems a good mix of new and old faces from various worlds, leaving open a number of possibilities as to how the series can move forward.

I like Better Call Saul. Odenkirk is still doing the great work he did in Breaking Bad, deepening the character and showing more range. While I have pointed out a number of similarities to that other series, it also has the bones to be its own story completely, not reliant on its predecessor as it goes on, with references being more funny that necessary. It’s early to make a judgment, but AMC’s decision to already order a second season makes me optimistic my faith in BETTER CALL SAUL is not misplaced.

BETTER CALL SAUL moves to its normal night and time this evening, airing episode two at 10 p.m. ET on AMC.