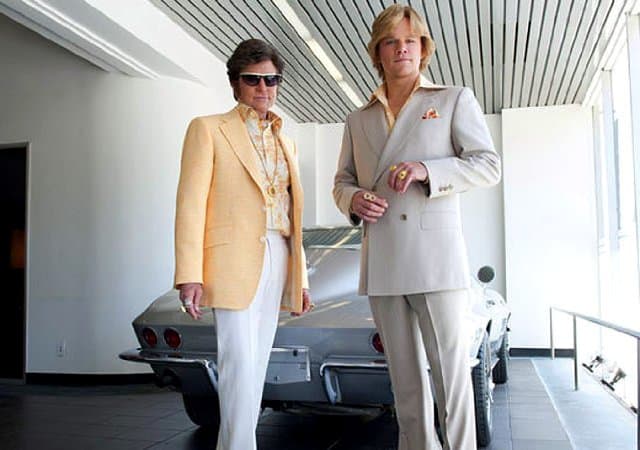 HBO generally does a great job with their original films, and the latest, BEHIND THE CANDELABRA, which premiered last night, is no different. The movie details the relationship between famous performer Liberace (Michael Douglas) and Scott Thorson (Matt Damon), from when they meet to Liberace’s death. Based on the book by Thorson, it may feel a little one-sided, but is well presented.

Douglas is excellent as Liberace. He lived before my time, so I don’t have personal memories of the performer, but from the little bit I know about him, Douglas seems to capture the spirit and the personality. He is a flamboyant showman, insecure and addicted to being loved. He seems to find peace for a time with Thorson, but is always hungry for more attention and affection.

Damon is equally captivating as Thorson. At first, Thorson seems stiff and wooden, but over time, as he adjusts to Liberace and his lifestyle, Damon makes the man come alive, embracing a home, something he desperately wants and lacks all his life, as well as a way of living and direction. Thorson may or may not be bisexual, as he claims at first, perhaps willing to be with whoever will accept him. He does seem to care about Liberace, but Thorson also cares about being taken care of.

BEHIND THE CANDELABRA is much more than a biopic. It is the very tragic tale of two souls who have never quite found what they are looking for, but discover a kindred spirit in one another. They are both broken and damaged, and while they try to be what the other wants, sensing the similarities, they aren’t able to live up to those lofty expectations. Both scramble for something to hold onto, but are nearly impossible to satisfy.

Their love story reflects this inability to just be happy in the moment. They both make efforts to do so, but without knowing how to love themselves, they aren’t capable of being fully supportive of one another. Liberace turns to cosmetic surgery and sexual trysts, while Thorson becomes addicted to drugs, but the pathways are more alike than diverging.

Did Thorson love Liberace, or did he just want what Liberace was offering? Did Liberace love Thorson, or was he just drawn to the youth and spirit Thorson represented? These questions aren’t explicitly answered in the two hours, but Damon and Douglas give complex performances that capture the chemistry, warring emotions, and desires within the two men.

The two leads are joined by an absolutely outstanding supporting cast which includes: Dan Aykroyd as Seymour Heller, Liberace’s protective manager; Scott Bakula as Bob Black, the mutual friend that introduces them; Debbie Reynolds as Frances, Liberace’s elderly mother; Cheyenne Jackson as Billy Leatherwood, Liberace’s dissatisfied protégé; and Paul Reiser, Boyd Holbrook, Mike O’Malley, and Tom Papa in small parts that still leave an impression. All of these others may be on the outskirts of the main tale, but deserve credit for making it seem like a whole, complete look at two lives.

Special mention goes to Rob Lowe as Dr. Jack Startz, Liberace’s plastic surgeon and the pusher of Thorson’s drugs. At this point, it should hardly be surprising that Lowe can bring to life yet another eccentric oddball that feels fresh, and yet, he pulls it off again. A lot can be attributed to the facial expressions he exudes, but Lowe definitely plays a memorable role in this film.

Costumes and production design are predictably flawless. At this point, if a studio can’t deliver a convincing period piece, they ought to be ashamed of themselves. What is extra impressive in BEHIND THE CANDELABRA, though, is not just what stands out, but the reality glimpsed behind the facade. Glitter in Liberace’s hair that seems shining on stage comes across as part of a silly costume in the real moments away from the audience. The elaborate home of Liberace tells as much about the character as Douglas’s acting does. Liberace’s hair piece becomes a very essential representation of the man himself. These touches make the piece.

Pacing wise, BEHIND THE CANDELABRA does drag a bit in the middle. I think it kind of needs to to demonstrate where the romance begins to wear thin and when the problems crop up. However, there is a point where I got a little tired and the plot seemed to become a little predictable before ramping up to the antagonizing end.

The characters and their story is as much about our society during a certain decade as it is the people that the movie is about. The gluttony of excess is a familiar tale, one featured on the big screen right now in The Great Gatsby, a quintessential American trait. And with the gay rights movement finally changing minds and laws all over, it’s interesting to look back at a time of ignorance and denial. Including Liberace’s Catholic faith and funeral also points to the discrepancies present in many institutions, then and now.

BEHIND THE CANDELABRA is worth watching for all of the reasons I’ve mentioned and more. It’s not a perfect film, with historical events told from a certain point of view, but it is one that conveys something important and meaningful, balancing the personal story with the larger themes. Check it out, as HBO is currently re-running it frequently.