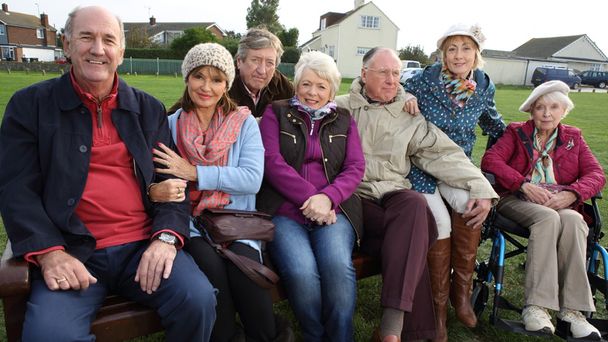 Grey Mates follows the ups and downs of three couples living in Thurnemouth, ‘Norfolk’s only West facing resort’. There’s Alan (Philip Jackson – Pete Versus Life, Poirot, My Week With Marilyn) and Joyce (Alison Steadman – The Syndicate, Gavin and Stacey, Fat Friends), who are coming at retirement from very different directions: Alan wants to slow down, Joyce wants to speed up. Alan tries to avoid as many of Joyce’s social commitments as possible, but downsizing to a bungalow has meant there are fewer places to hide.

John (Russ Abbot – Last of the Summer Wine, September Song) and Maureen (Stephanie Beacham – Bad Girls, Dynasty), live in their gadget-filled dream house, adventurous in every aspect including the bedroom. For them 60 is the new 40. However, there’s a reminder of what’s around the corner with Maureen’s ever-present mum, Joan (June Whitfield – Last of the Summer Wine, Absolutely Fabulous, Terry And June).

And finally there’s Trevor (James Smith – Grandma’s House, In The Loop, The Thick Of It) and Carol (Paula Wilcox – Mount Pleasant, Emmerdale, Man About The House) who’ve got non-communication down to such a fine art that if Carol spent a weekend away, Trevor might not even notice. Thirty years of living in each other’s pockets have shown the benefits and drawbacks of staying friends over the decades…

As the series opens it’s Trevor and Carol’s anniversary and Joyce has invited the group to make it a celebration to remember. However, the perfect day is threatened by a series of unfortunate incidents. Not least the unexpected arrival of Maureen’s mum Joan who’s partial to a drink or two. Then Carol drops a bombshell. Maureen and Joyce have different views on how to put the party back on track, and the men try to deal with the inevitable fallout. The best laid plans, like Maureen’s mum, often go astray… Each couple takes a long, hard look at who they’ve ended up with; there’s so much more to achieve in their own lives – do they want to spend the rest of it with each other?

Grey Mates (6×30-minutes) is written by Richard Pinto (Citizen Khan, The Armstrong & Miller Show, The Kumars at No 42) and produced by Paul Schlesinger (the BAFTA winning Twenty Twelve, Citizen Khan). The series is directed by Adam Miller (Some Girls, Mongrels, Katy Brand’s Big Ass Show). The Executive Producers are Jimmy Mulville for Hat Trick Productions and Shane Allen (Controller of Comedy Commissioning) and Gregor Sharp (Commissioning Editor) for the BBC. The series will go into production next spring to screen later in the year.

BBC One Controller Charlotte Moore says: “Comedy has a unique ability to make the ordinary extraordinary and Grey Mates delivers that with a big hit of character. The series follows three newly retired couples who re-discover what it means to have time on their hands. Hilariously brought to life by a stellar cast whose relationships are tested in a multitude of ways.”

Shane Allen, Controller, Comedy Commissioning says: “This is a very modern, affectionate and brutally honest single camera take on a stage of life often stereotyped and outmoded in sitcomworld. Cast perfection on top of a script that glitters with comedy gems.”

Jimmy Mulville says: “Richard Pinto has captured exactly what it’s like to be 60-something in the 21st Century. It’s laugh-out-loud and touching, sometimes in the same moment.”

Paul Schlesinger adds: “I’m delighted we are making this for BBC One – especially as the stories revolve around a group of characters who don’t often take centre stage in comedy. Forensically observed relationships with a superb cast which we hope will bring audiences back week after week.”

Grey Mates is a Hat Trick production for BBC One.