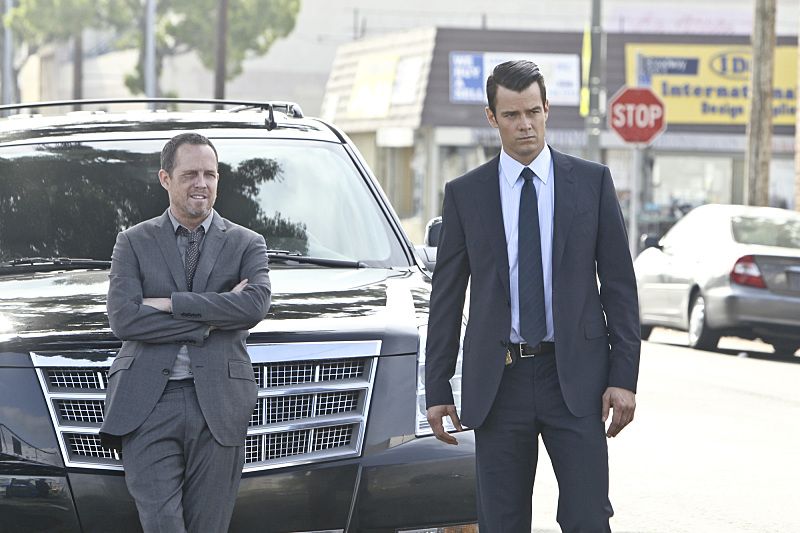 Detective Russ Agnew (Dean Winters, Law & Order: SVU) is a frustrated cop in Battlecreek, Michigan, a city of 50,000 whose force is underfunded and underappreciated. When the FBI decides to open up a field office in the same building the police inhabit, Agnew thinks he will show them “The Battle Creek Way,” which is also the name of the pilot episode. Boy, is he in for a surprise in CBS’s new drama, BATTLE CREEK.

BATTLE CREEK is most likely going to be a case-of-the-week, buddy cop series, which is nothing new at all. While both of the main protagonists are men, an idea that almost feels fresh again after the male-female pairings of Castle, Bones, Law & Order: SVU, and so many others in recent memory, it really is a tired old concept done to death in the 90s and earlier before being fairly recently retired.

Yet, the pilot doesn’t feel tired. Maybe it’s because Battle Creek is set in a small town in the Midwest, rather than New York or LA, as most television shows are. As an Ohioan myself, I greatly appreciate this. Maybe it’s the excellent cast, which is better staffed than any procedural has the right to be. Maybe it’s just the snarky dialogue and the impeccable chemistry between the series’ leads. Maybe it’s the fact that House’s David Shore and Breaking Bad’s Vince Gilligan created this series, lending it a high pedigree. Whatever it is, I really enjoyed the pilot.

Now, that doesn’t mean I’m giving this series a great review. While it is my job to judge a show based on its premiere episode and I do it often, I personally usually give a series more than one episode in order to figure out if they make the list I’m going to continue to watch. I have seen a number of great programs spring from poor pilots. It’s rarer that a series would go the opposite direction, but given the network BATTLE CREEK airs on and its inherent premise, that could certainly be the case in this instance.

Let’s get back to this show specifically, though. Agnew’s partner is Special Agent Milton Chamberlain (Josh Duhamel, Transformers), a golden boy “promoted” to run his own office in the podunk town. Milt knows this isn’t exactly a plum position, but he’s determined to make the best of it, and brings a calming counterpoint to Agnew’s hot-headedness.

If BATTLE CREEK stays focused on just the two of them, it is doomed to grow stale quickly. I hope this won’t end up being the case, as the ensemble is quite capable of more, and it is stacked with a comedy bend that could keep the tone from being bogged down in the cases. There’s Detective Fontanelle (Kal Penn, House), Agnew’s former partner, office manager Holly (Aubrey Dollar, Women’s Murder Club), Commander Guziewicz (Janet McTeer, Damages), Agnew’s boss, and Detective Funkhauser (Edward Fordham, Cuts), as well as recurring roles Detective Jacocks (Liza Lapira, Super Fun Night) and Detective Niblet (Damon Herriman, Justified). Almost all of these are most welcome.

The first hour spends a lot of time on character introductions, and there’s a case tossed in for good measure. At least half the running time is on the former, which is a good sign, but it’s possible that is only done because this is a pilot. The ratio between character development and finite story is what will determine if the show is any good or not. Most CBS series rely very heavily on the latter, to their detriment.

If BATTLE CREEK shall succeed, it should remember to keep the focus on the players, toss in larger arcs and many recurring characters (including some who work for or with Milt, since so far everyone is on Agnew’s team), and make sure it is accurate in its depiction of the setting, something I’m not familiar enough with the real Battle Creek to judge. However, whether the last is handled with authenticity is likely to become more obvious in the coming weeks, and I hope it respects the local flavor that could set it apart.

BATTLE CREEK premieres this Sunday at 10 p.m. ET on CBS.