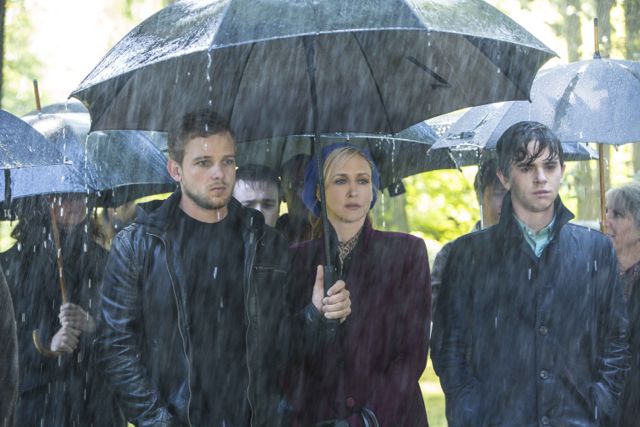 A&E’s BATES MOTEL has been “Gone But Not Forgotten,” but now it’s back with a second season. After a brief, dark opening, the show picks up four months after the events of last year’s finale. Miss Watson’s (Keegan Connor Tracy) murder remains unsolved, and Norma (Vera Farmiga) wonders why Norman (Freddie Highmore) seems so obsessed with his former teacher. Meanwhile, Bradley (Nicola Peltz) is being released from a mental hospital after trying to kill herself (the aforementioned prologue), and now that she’s out, she isn’t about to just return to the life she lived.

It’s kind of sad to see Bradley turn into such a different person. Surely it’s fun for Peltz to play, and she does just as convincing a job with bad Bradley as she did with good Bradley. But the sweet, popular girl that everyone liked, even those whose love interests looked at Bradley a little too long, has been replaced by someone completely self-destructive. This means that one of the two lights on the show has dimmed considerably, a regrettable thing in a dreary drama.

That being said, the hallmark of a good character is growth, and for Bradley, she’s going through quite a bit of it. Realizing she didn’t really know her father and now won’t get the chance to, she is determined to uncover his lies and get revenge for his death. This is a stronger, more determined Bradley, and if she goes a little off the rails, or even a lot, well, there’s plenty of time left for redemption.

There is still some hope for Bradley. A couple of times in “Gone But Not Forgotten,” we do see glimpses of the old Bradley. So if she survives her coming ordeals, which are kicked up quite a notch by the end of the hour, there is still some chance that she can recover herself. But that’s a real ‘if’ in a show like this.

Norman does offer to help Bradley, but is he in a position to do so? He’s got his own serious problems. We don’t know for sure if he killed Miss Watson, having only seen him in her house and then running through the rain while she lay dead. However, it seems like a solid bet since Norman has a history of blocking out the memories of killing people, such as his own father. “Gone But Not Forgotten” doesn’t clear up the mystery. It seems destined to hang around awhile, much like last season’s murder.

Norma seems relatively sure Norman did the deed, and equally determined not to let her son find out. I know she wants to be a good mother and protect Norman, but is covering up his crimes the way to do it? Shouldn’t she be trying to get her boy help so he can move past his homicidal tendencies? Or does she worry he’s a psychopath and really just not know how to deal with that, and so buries her head in the sand to get by?

Norma spends much of this premiere fighting against the bypass, now starting construction, which will draw business away from their motel, which seems to be doing OK for now. This is an important cause to her livelihood, but I’ve got a feeling that she pours herself into such things to avoid processing what Norman does. She’s selfish at times, but knowing Norman has killed has to affect her more than she lets on, and keeping active will prevent too much quiet introspection.

We get less of Dylan (Max Thieriot) and Emma (Olivia Decody) in the first episode back, but that makes sense, since Bradley, Norma, and Norman have enough important story to fill the installment. Dylan is still fighting his feelings for Bradley, out of respect for Norman, while working the pot business and Emma is still pining over Norman and being jealous of Bradley. So they’re status quo for now.

BATES MOTEL does a nice job of setting up suspense, then letting it play out in unexpected ways. Sherriff Romero (Nestor Carbonell) is investigating what happened to Miss Watson and he’ll probably eventually get to the truth. But there’s no rush, other threads continue, and any breaks in the case will likely happen when we least are looking for it. It’s not as high quality as some other shows, as it does sort of stick to a formula, but the writers do know what they’re doing and it’s quite enjoyable overall.

The only question I’m left with is, as much as Norman seems to keep getting involved in shady stuff, how will he eventually be the unassuming motel proprietor? Will everyone that has reason to be suspicious of him eventually die, finally allowing him to fade into the background of the town? He does seem to keep bringing more trouble on himself, though, and as Norma won’t be around to deflect attention forever, there has to be some good tie up that makes sense at the end. Maybe, by the time Norma dies, the evidence will all point towards her and, for some reason, Norman will accept that?