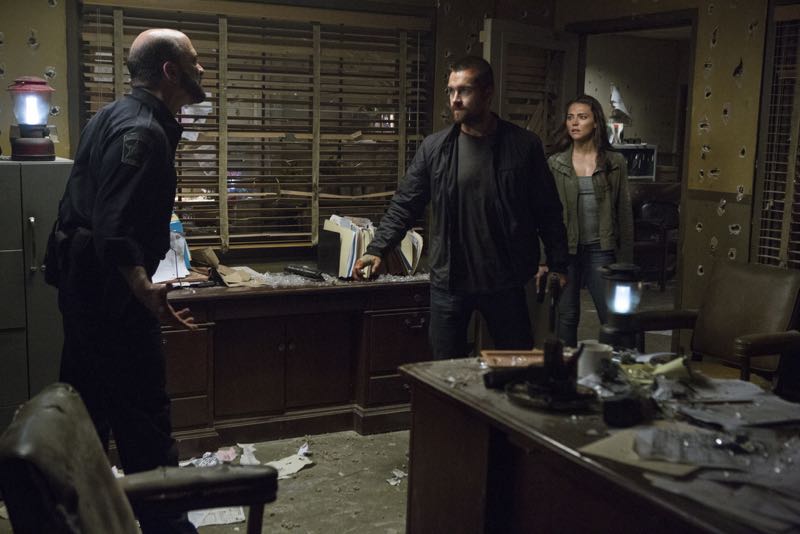 After last week’s episode ended with the cliffhanger, where Deputy Siobhan Kelly (Trieste Kelly Dunn) found out Sheriff Hood’s (Antony Starr) true identity, fans are on pins and needles to find out whether she will arrest him or stand by him in the con-job he has been pulling on the entire town of BANSHEE.  Given how deeply Siobhan feels for Hood, she may just want to protect him; but would that be betraying her core beliefs as a cop if she did?  This is the quandary she is faced with — an inner tug-of-war that is clearly not going to be resolved that easily.  It is one thing to protect one of your own, such as standing by Hood during all his various shoot-outs than may have crossed the thin-blue-line a bit, or even to participate in the cold-blooded execution of Hondo (Tyson Sullivan), who had viciously killed Deputy Emmett Yawners (Demetrius Grosse).  But can she, in all good conscience, stand by Hood knowing that he is not even a real cop?  It strikes deep in her soul — thinking the man she considered a soul-mate is now just another guy conning her too.  That personal betrayal and professional deception may be just too much.  After all, if he could fool her so completely about who he was for so long, maybe he has been fooling her about loving her as well — for that is the thing with con-men, you never know if anything they say or do means anything.  It is all but just an illusion to pull off the con.

So as Siobhan wrestles to figure out what is real and what isn’t, time is not exactly on her side as she, Hood, Brock (Matt Servitto), and Procter (Ulrich Thomsen) are trapped in the Cadi police station with a handful of civilians, surrounded by Chayton’s (Geno Segers) army, who is intent on killing Procter and Billy Raven (Chaske Spencer) as payback for the deaths of Alex and Lola Longshadow (Anthony Ruivivar, Odette Annable) and Chayton’s brother.  It’s blood for blood. Anything less will not be accepted.

But will Hood and his team be able to keep Chayton and his army out long enough for the cavalry to arrive? That is even assuming that there is any calvary or anyone at all to come to their rescue; particularly as that prospect seems more and more unlikely as the phone lines are cut and their cellphones jammed.  Clearly, Chayton is not messing around.  He is executing a well thought-out battle plan and he intends to win.  Fortunately, Hood has a few surprises for Chayton.  For one, Chayton does not anticipate the resistance and physical barriers that stand between him and his vengeance.   Guns can only shoot bullets and their own have limitations.  For another, Chayton is up against police and trained killers — for as we all know, Procter is not going down without a fight, whether in police custody or not.  In addition, there is Procter’s squirrelly lawyer who is sure to drive everyone a bit nuts in the midst of it all.  So, it is the things one cannot anticipate that just may give one side or the other the edge in this fight to the death.

Unfortunately, that is the one thing you can trust about BANSHEE: it does not spare the brutal reality of how such a fight would go down — so both sides are guaranteed to sustain losses, there also are guaranteed unexpected surprises, and it is guaranteed that the battle will not end until one or the other dies.  That’s right.  Death comes a knockin’ and that door is opened wide.  You just better be praying that death has someone specific (and deserving) in mind so it will not cause fans to thrown anything at their television screens.

So, with death guaranteed, what else can fans look forward to?  Well, in the midst of the blood and bullets, there are some truly magnificent scenes showcasing all the players — for each character is given their moment to shine (yes, that includes Procter — for, in a real battle, every person is vital to survival.  Worse yet, there is no one who will be untouched or unscarred by this confrontation.  This episode takes care to show how each person will either fall or rise to the occasion, and how that mettle makes a difference in turning the tide of the war at hand.

What will astound viewers more will be remembering that this is only episode 5 of Season 3 and that there are five more episodes to go.  It is tricky to remember that BANSHEE is always about more than just one battle and one common enemy.  It is about how BANSHEE is a bubbling volcano of corruption and boiling prejudices — each coming to the surface as pressure points propel them to full blown eruption.

Even before Hood came to town and struck a match blowing up Carrie’s (Ivana Milicevic) life and inserting himself as the pivot point for a clash of wills between law enforcement and the criminals residing in Banshee, there was a hot bed of molten lava just waiting to be unleashed.

As will be explored throughout the rest of the season, Hood’s actions were both a catalyst and the necessary linch-pin for all of it for the second he drove into town.  So Hood will look back at how his decision to stay and assume the identity of the town’s sheriff has sent unanticipated ripple-effects across the entire town and how those ripples led to this brutal showdown at the CADI — and he will wonder if he could have done any of it differently.

So see who makes it out alive and why, be sure to tune in for this week’s all new (and painful) episode of BANSHEE on Friday, February 6th at 10:00 p.m. on Cinemax.