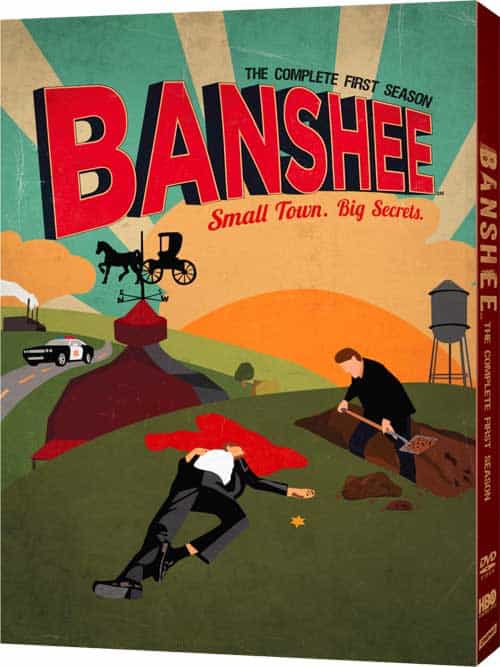 Seat42f and HBO Home Entertainment have teamed up to give TWO lucky winners a copy of BANSHEE Season 1 on DVD. For a chance to win leave a comment below telling us why you want to add BANSHEE Season 1 to your DVD collection. Only one entry per person. Contest ends August 13th. Winners will be notified on August 14th via email so make sure to use a valid email address when you post your comment.

“Addictive” (GQ) and “wickedly fun” (Entertainment Weekly), Banshee is an “action fan’s dream come true” (New York Post).  Suspenseful and highly entertaining, the new Cinemax® series follows an ex-con who assumes the identity of the sheriff of a small town where he continues his criminal activities, even as he’s hunted by the shadowy gangsters he betrayed years earlier. Banshee: The Complete First Season will be available July 30, 2013 on Blu-ray with Digital Copy ($49.99), DVD ($39.98) and Digital Download and features extensive extra features.

Season one of the series begins with a bizarre twist of fate as a recently paroled master thief assumes the identity of Lucas Hood, sheriff-in-waiting of Banshee, Pa., the same town where his former partner and lover Carrie relocated and remarried years ago. Keeping his history a secret as he awaits forged papers from an old associate, Lucas befriends boxer-turned-bartender Sugar Bates and settles into his new life. Itching for the thrill of thievery and yearning for Carrie, Lucas inadvertently gets tangled up in the rampant corruption of shunned Amish gangster Kai Proctor while keeping a vigilant eye out for Mr. Rabbit, the New York mob boss who wants revenge against Lucas and Carrie for the jewel heist that landed Lucas in prison.