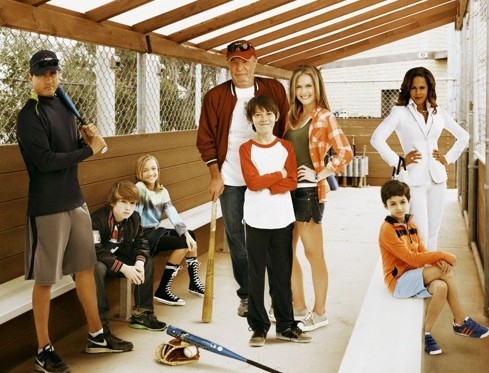 When it was announced that Maggie Lawson would miss multiple episodes of USA’s Psych, possibly in its final season, to star in a new sitcom for ABC, the hope was that it would be as good as the show she was leaving, worth the sacrifice fans would have to make to lose her, similar to her co-star Dule Hill’s early departure from The West Wing for Psych, which was a step down, but not an indigestible one.

Sadly, despite all of her charm, Maggie’s new series, BACK IN THE GAME, is the worst new fall series I’ve watched so far this year, and in the past few years, too.

Maggie stars as Terry Gannon, Jr., the daughter of former baseball player and current drinker Terry “The Cannon” Gannon, Sr. (James Caan, Las Vegas, The Godfather). Terry is forced to move back home with a father she thinks doesn’t love her for financial reasons after a messy divorce from a husband who cheated on her. When her son, Danny (Griffin Gluck, Private Practice), wants to play the detested game, Terry is forced to confront her childhood miseries and coach a team of misfits.

That’s right, a team of misfits. Just like The Bad News Bears, Ladybugs, The Might Ducks, and oh so many other sports films. Terry’s group consists of a bunch of kids who will never, ever be good, and one wonders how these boys ever even though about trying out in the first place. The only thing missing is an out-of-place girl, though I guess that’s Terry herself. If the show decides to let the team improve, it will do the same disservice those fondly remembered, but not very good, movies did to viewers.

They do have a rival team, the one the kids were cut from, which is run by an aptly named man, Dick (Ben Koldyke, How I Met Your Mother). Dick is a jerk straight out of an early nineteen-nineties stereotype who thinks that girls can’t play (or coach) baseball, insults soccer for doing the same thing baseball does, and has no talent to back up his boasting. It’s the epitome of a poorly written character in a poorly written scenario. Surely, Dick must be a love interest for Terry, after she fixes him.

As you might have guessed, Dick has a son named David (Copper Roth) who is just as much of a bully as his father. Completely independent of Dick and Terry’s rivalry, David picks on Danny. It’s a shame that the story is so lazy, but that’s the way it is.

Danny deals with his tormentor by kissing him full on the lips to scare David off. It’s a move that seems smart and impresses David’s girlfriend, Danny’s crush, Vanessa (Kennedy Waite). Instead of celebrating the one thing in the “Pilot” that stands out, though, the show plays it off as a dated gay joke. Very disappointing.

Of course, Terry coaching and fighting with these other people is really just an excuse for her to work things out with The Cannon. The same writers who created Dick might think they are clever by switching genders and making it be a daughter who has to make peace with her dad, but it’s just as stale as if Terry had been a son.

What I can’t figure out is who The Cannon is. He’s a guy who never showed up to a single one of his daughter’s college baseball games and can’t remember his own grandson’s name, but also will bust a car window to protect his family and has lots of games Terry played in secretly videotaped. I think the point is to show he loves Terry but doesn’t know how to communicate it. However, this makes no sense in considering other things The Cannon does or says, unfortunately putting a very black mark on Caan’s otherwise impressive resume.

Rounding out the cast is Terry’s instant new best friend Lulu, played by respected British actress Lenora Crichlow (Being Human). Why Crichlow would hitch her wagon to such a forgettable effort is baffling, and one wishes better for her in the near future.

BACK IN THE GAME doesn’t have to be as bad as it is, but it is truly bad. Might it improve with time? There’s always a slim possibility. There just seems to be no shred of promise in the entire first half hour.

BACK IN THE GAME’s “Pilot” is available on Hulu now and will premiere on ABC Wednesday, September 25th at 8:30 p.m. ET.