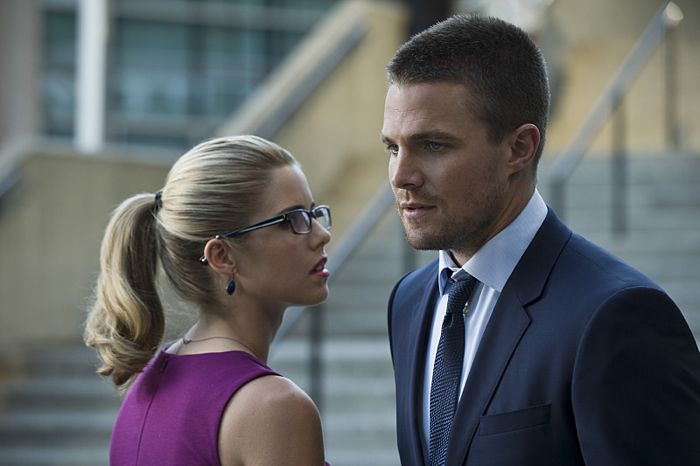 The third season premiere of the CW’s ARROW certainly starts in, as the episode title suggests, “The Calm” before the storm. But that storm picks up in no time, ripping apart the worlds of a number of main characters, and leading to some huge developments. This first installment of season three cannot be called boring, and it sucks viewers right back into the superhero world in moments.

“The Calm” delivers something fans have being waiting a long time for, especially this past summer: Oliver (Stephen Amell) asks Felicity (Emily Bett Rickards) on a date. He has resisted love before because of the danger of his position. He is with Sara (Caity Lotz) for a time, but she’s a superhero, too, so can take care of herself and is in danger with or without him. But seeing Diggle (David Ramsey) happy in a relationship, awaiting the birth of his baby, Oliver decides to take a chance and takes an eager Felicity to dinner. He asking her out and the date are probably the best scenes in the hour, with great dialogue and goofy googly eyes.

Of course, this being ARROW, there is no time for niceties. The new pair hasn’t even begun their meal yet when a new Vertigo (Peter Stormare, Prison Break, 22 Jump Street), taking up the mantle for the fallen Count, attacks, blowing up the restaurant and hurting Felicity, though thankfully not seriously.

This makes Oliver pull away. After all, his fears are confirmed now, right? He can’t be with Felicity without her getting hurt. She resists the breakup (if you can call it that). Oliver doesn’t help matters when he kisses her, insisting he loves her, and it takes Felicity’s strength to pull away, knowing if Oliver can’t fully commit, she doesn’t want him. This is a complicated romance, as they both care about each other and will still have to spend lots of time together, but Oliver is holding back, preventing them from being happy. He needs to realize that Felicity understands the risks and is a grown woman who can make her own choices. Otherwise, shippers watching at home will just keep growing more frustrated. It’s 2014. Other shows are letting their leads get together. Come on, ARROW!

The other consequence of this attack is that Oliver makes Diggle sit out a mission. At first Diggle is furious, but after seeing his baby born, his priorities change. He and Oliver remain friends, but it seems the bodyguard is leaving the team, or at least staying in the office. It’s a tad regrettable and surely temporary, but it’s also easy to see Diggle’s perspective. He’s not a superhero.

If Oliver doesn’t act to be with Felicity soon, he’s likely to lose her to another suitor. Ray Palmer (Brandon Routh, Chuck, Superman Returns) blows into town, quickly flirts with Felicity, then takes Queen Consolidated with his plan to make Starling City a ‘Star City’ that people want to live in again (the population has shrunk due to the events of the past two seasons). He is smooth and charming and smart and definitely likes the blond genius. Might he steal her heart? And if he does, will he take care of it, or will he turn out to be yet another villain with an agenda? I like that we don’t know, ARROW teasing us with a bit of mystery.

I love Routh, a magnetic performer, and this is a great role for him. It’s good to see him still getting work after his own superhero film didn’t do so well. This reminds me a bit of his part in Chuck, which is why I’m suspicious of the character. But any chance to get him on screen this way is welcome.

Oliver has other romantic options, too. Sara returns in “The Calm,” just in time to help take down the new Vertigo. But her triumph is short-lived when, after nice conversations with Oliver and Laurel (Katie Cassidy), she is killed by an unknown assailant, body falling in front of her sister’s feet. So I guess Oliver doesn’t really have other options.

Sara’s death is shocking. While not a main character, she is a staple of ARROW, and her passing will certainly rock many people, from her ailing father, Quentin (Paul Blackthorne), who is trying to support The Arrow and do his job with a condition that should make him slow down, to Laurel, who is on a crusade against crime and doing well, to Oliver, whose fears about being with someone will only be further reinforced. Plus, the rest of the characters know her, too, so there will be a variety of ways to represent that grief in next week’s installment, “Sara.”

Of course, ARROW is always flashback heavy. This week’s scenes in Hong Kong are pretty forgettable, as much of the backstory stuff is. However, toss a dead Sara back into this stuff and it will suddenly be reinvigorated. I think the writers are smart enough to make that happen, going by executive producer Marc Guggenheim’s recent comments.

There is also a Barry (Grant Gustin) cameo that is completely unnecessary, but no one will ever accuse ARROW and The Flash of not taking advantage of cross-promotion when they can, which is hard to blame them for. The Flash is definitely a show worth watching, too, with a different flavor than ARROW, but just as action-packed.

“The Calm” leaves a lot of hanging threads. Quentin has stopped the police force from hunting Arrow, but how long can he remain in charge, given his condition? Will crime make a comeback in the city after Team Arrow has stomped most of it out (spoiler: yes)? Can one ever truly kill Vertigo, or will a new baddie keep taking that name and rising up? How will Oliver support himself without a job? How long will Felicity stay at the Best Buy Buy More tech store? Who will die next? It’s a great episode, with a lot happening and much more promised.