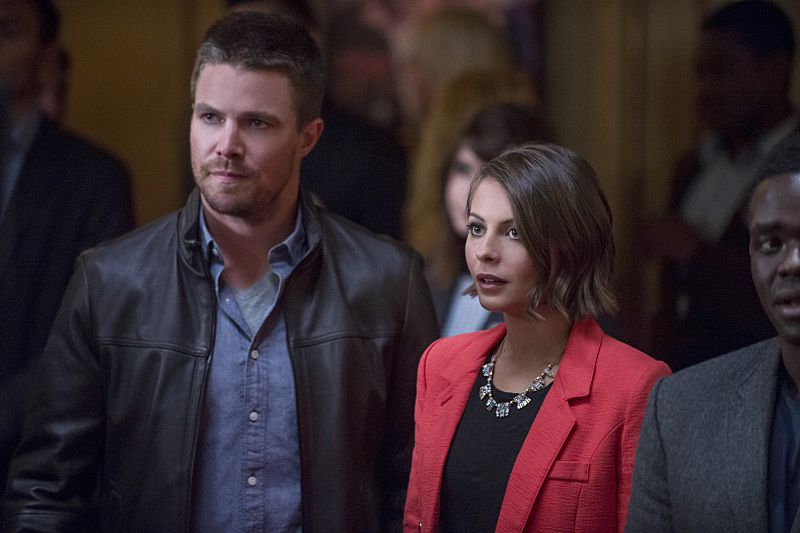 This week’s ARROW finds a friend of the Queens becoming “The Candidate” for mayor of Star City. Given what has been happening to other candidates, and that Team Arrow has made no progress against the ghosts terrorizing the town, this doesn’t seem like a good idea. But not everyone believes what Star City needs is a mask; some people want a hero in the light. Is there anyone who can be found to fill that role?

I am disappointed that Jeri Ryan (Star Trek: Voyager, Body of Proof) is brought in to play Jessica Danforth, a seemingly one-episode character. I enjoy that actress, and I liked this role for her. I was hoping she’d stick around a bit longer.

But it’s hard to blame Jessica for withdrawing from the race. With her daughter, Madison (Tiera Skovbye), kidnapped by mad man Anarky (Alexander Calvert), one understands why Jessica doesn’t want to ride things out. She’s fine with risking her own life when the city needs her to, but not her daughter’s. Few would act differently in her position, nor blame her for this.

The primary conflict between Quentin Lance (Paul Blackthorne) and Oliver Queen (Stephen Amell) at this point seems to be that Oliver keeps his identity a secret. I can see why a police officer has a problem with that, but I’m glad things are thawing a little between them, Quentin even asking for Oliver’s help at one point. Hopefully, their relationship will much improve now that Oliver is running for mayor, a position that he is uniquely suited for given his ability to stay alive.

I wonder if Oliver can keep being the Green Arrow while running for mayor. It seems like he’ll have to choose one or the other. As mayor, he will be watched much more closely than he is now. But he’s seen how bad the city is, and someone has to step up. At least Thea (Willa Holland), the one family member he has left, can take care of herself at this point, unlike Madison.

Well, Thea can defend herself, but she’s not all right. The effects of the Lazarus Pit are beginning to show themselves in her brutality. Oliver is willing to let Quentin believe he burned Anarky to protect his sister, but he won’t be able to keep covering things up for her long-term. That’s why, even though The League is dangerous, it seems a good plan for Laurel (Katie Cassidy) to take Thea back to the Pit. With her dad in charge now, surely something can be figured out to help Thea.

Less smart is Laurel’s plan to bring her own sister, Sara, back in the Pit. Laurel has already seen the negative effects of resurrection. She should definitely wait and see what happens with Thea first, to understand if the negatives can be overcome. I also wonder if the Lazarus Pit would even work on someone who has been dead as long as Sara has. I guess we’ll soon find out, though Sara’s starring role in the Legends of Tomorrow spin-off seems to indicate she will rise again.

I enjoy “The Candidate” a great deal. Besides the stories above, which are all interesting and engaging, there’re a lot of fun moments in Felicity (Emily Bett Rickards) asking for a code name, or as she tries to take control of the company she now runs. New character Curtis Holt (Echo Kellum, Ben and Kate) has plenty of potential. The series is doing a great job balancing the various plot lines, while developing each character on an individual basis. As long as ARROW keeps up this trend, I’ll have no complaints.