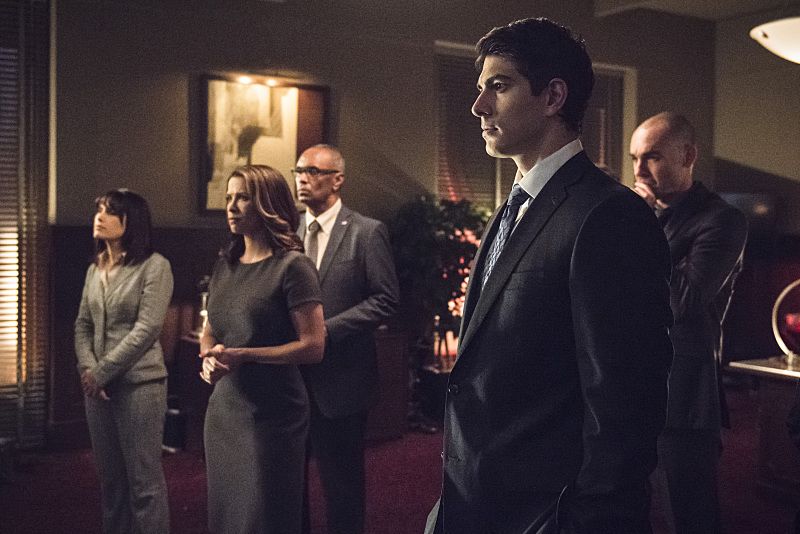 The CW’s ARROW continues a harrowing plot last night in “Midnight City” as those left in Starling try to make up for the presumed-dead Arrow (Stephen Amell). This is easier said than done, though, as powerful villain Brick (Vinnie Jones) has crippled the city and frightened the mayor (Christina Cox), and not every new costumed vigilante is up to snuff yet. Will Oliver return to save the day before it’s too late?

I think the best thing “Midnight City” does is expose Laurel’s (Katie Cassidy) weaknesses as the Black Canary. She hasn’t been training that long, nor does she go through the experiences Oliver and Sara (Caity Lotz – whose voice returns!) do. Arsenal (Colton Haynes) and Diggle (David Ramsey) have spent more time on the job, but even they’re not up to the same level as Oliver and Sara were, so it’s nice to see Laurel isn’t, either. Better for ARROW to take its time developing its next hero than to unrealistically rush in.

And develop, she will. This week’s episode finds several members of the team struggling to carry on. Laurel has plenty of self-doubt. Felicity (Emily Bett Rickards) has quit because she’s so discouraged. But with Brick doing what he’s doing, someone has to step forward. So the series lets our main players wonder if they’re cut out for this kind of life, but then they recommit themselves to it because someone has to and they realize they stand the best chance of anyone in the city to do so.

Felicity should also calm a bit when she decides to help Ray (Brandon Routh) finish his super suit. Ray may not be ready to take on any baddie too big, but he does have some of the same qualities that many of the rest on the team do. If they aren’t up to Oliver’s level, their strength can come in numbers by adding another capable person to the mix. As we see in “Midnight City,” Laurel can afford to stumble if Arsenal has her back. Ray should help with this.

Of course, there are more people to watch out for than even Team Arrow knows about. This week, it is revealed that Chase (Austin Butler) is working for Maseo (Karl Yune) and the League of Assassins. That certainly explains his interest in Thea (Willa Holland), though she deserves someone genuinely attracted to her. But it also leaves a big question mark in what Chase’s intentions are and what he is prepared to do.

Maseo is a shady character. He rescues Oliver, sure, and that makes him somewhat noble, repaying Oliver for the past. However, Maseo also still works for The League. And while he’s willing to kill some of his fellows if it endangers Tatsu (Rila Fukushima), his ex-wife, and himself, that doesn’t mean he doesn’t have any loyalty left towards his employer. This arc is far from over.

It’s nice to see Thea stand up to Malcolm (John Barrowman) using his own words against him. That’s a strong sign she has not turned into his puppet, and may not listen to him at a crucial moment when she shouldn’t.

As if all of the action isn’t enough, major emotion comes into “Midnight City” when Quentin (Paul Blackthorne) hears that Black Canary is back in town. Naturally, he assumes it’s Sara, as he still doesn’t know that Sara is dead. Laurel goes to great lengths to keep him believing this, with assistance from Felicity in mimicking Sara’s voice. I don’t think it’s smart to keep stringing this out because Quentin is going to learn eventually and then be even more upset with Laurel for keeping it from him. But the reasons behind Laurel’s actions are pure, and it’s very moving to see how faking it affects her.

What ARROW is doing well is building large mythology and big arcs. Even this week’s flashbacks are more tolerable because they seem even more relevant to the present than most. At a time where some serial shows are disappointingly shifting more procedural (I’m looking at you, Sleepy Hollow), it’s nice to see a show go the other way, as it makes for a far more compelling story.