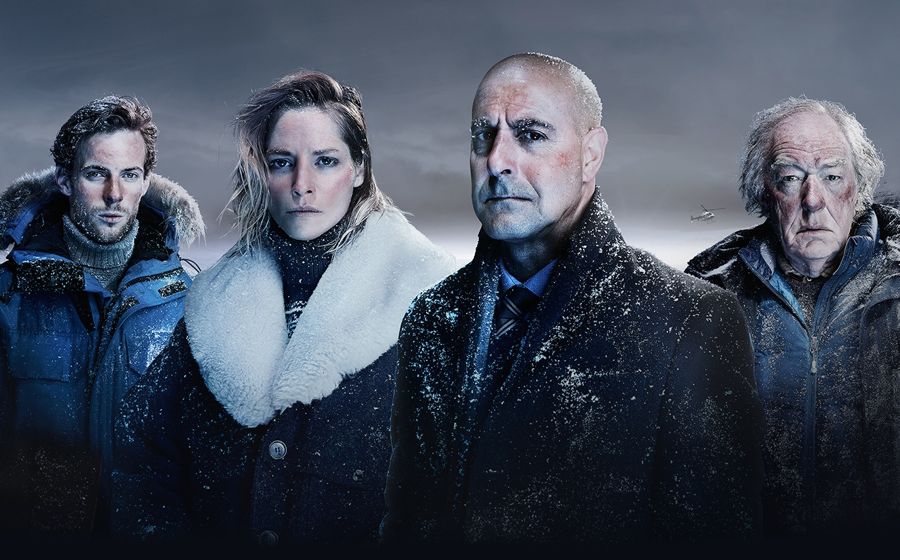 Making its grand debut as Pivot Channel’s first scripted drama series, FORTITUDE is a psychological thriller set in the Arctic after a brutal murder shakes a small community.  Starring Richard Dormer, Stanley Tucci, Christopher Eccleston, Veronica Echegui and Luke Treadaway, FORTITUDE follows how the unexpected murder of one of their own uncovers a wide-array of dark secrets; for it seems like everyone in the town of Fortitude has something they wish to keep hidden.  Yet only one of them ended up committing murder over it — so far.

Combined with a freezing climate where there are 3,000 polar bears and only 2,000 people, Mother Nature is a constant and deadly threat.  Then also adding to the difficulties of the community is looming threat of economic collapse as the town’s financial stability is about to topple due to the decreased demand for coal and the need for a new resource to exploit — whether it is building a new tourist resort directly into the ice cliffs or making a stunning scientific discovery that had been buried for thousands of years under the ice.  Just who is pushed over the edge and willing takes a human life — whether out of desperation or necessity — becomes the pressing question, and whether he or she will kill again.

As presented during the Television Critic’s Winter 2015 Tour, FORTITUDE is described as a powerful, psychological thriller where the savage beauty of the landscape and the rising temperatures play an important role in the unfolding mystery.  Creator and executive producer Simon Donald emphasized that he was determined to film the show so far up in the Arctic because they needed permafrost.  He explained, “We needed to find a place where hidden things could emerge from the past and come into the present in a convincing, scientific way.” He also revealed that the remote location provided a natural way of gathering the multi-national population together in this small setting.  It also added an element of unpredictability that lies beneath the story.  Complementing the backdrop of dying coal mining industry, in Fortitude, the local university draws researchers from all over the world come to study, and it is this multi-national gathering of people leads to a natural friction amongst the different cultures and raises jurisdiction issues during the murder investigation.

As the cast of characters are introduced, Stanley Tucci’s character, DCI Mortan, is the predominant viewpoint, but he is a late-arriving outsider who is brought in to investigate the murder.  So, much of the story is seen through the eyes of other three principal characters:  Vincent Rattrey (Luke Treadaway), a young scientist who has recently come to research bio-magnification of chemicals and the effects on polar bears; Elena Donnelly (Veronica Echegui), the hotel receptionist with a secret; and Sheriff Dan Anderssen (Richard Domer), whose own motivations are murky at best.  Luke Treadaway described his character Vincent as one who is in the wrong place at the wrong time as Vincent is quickly arrested after he finds the town’s first murder victim.  Then Veronica Echegui laughingly said her character Elena has “a strange relationship with everybody, in general.”  She also described Elena as someone who cannot control how she provokes people around her and, while conflicted about it, she accepts the darkness within her.  As for the town’s trusted sheriff, Richard Domer admitted that his character Dan Anderssen is rather enigmatic.  But in his mind, because Dan’s soul is part of the town — he would do anything to protect it and its inhabitants.

With only 12 episodes ordered by Pivot so far, executive producer Simon Donald was quick to reassure that viewers will get an answer to who committed the murder by the end of the first season.  So feel free to jump in and enjoy the show with the knowledge that there will a resolution.  FORTITUDE premieres Thursday, January 29th on Pivot Channel.  (Observation:  “Fortitude” is a very slow-build, but offers an incredibly intriguing mystery. The performances by Stanley Tucci, Christopher Eccleston and Richard Dormer also bring a nice gravitas and credibility to it. Plus, the icy scenery is amazing, making the show just gorgeous to watch.)