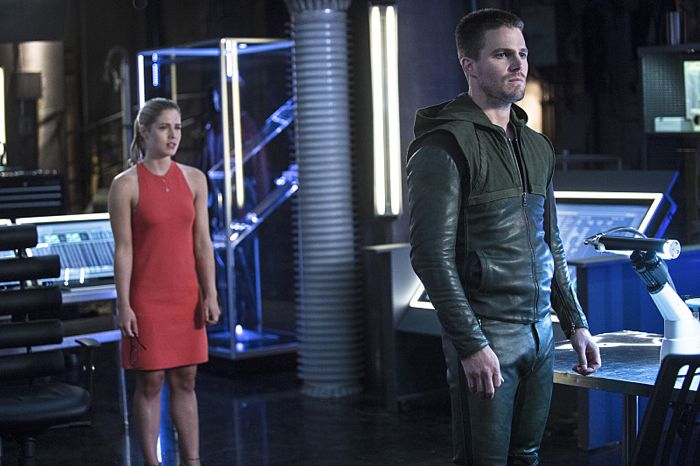 As is appropriate for an hour that spends most of its running time mourning the death of a character, this week’s installment of the CW’s ARROW, called “Sara,” is named after the deceased. Sara’s (Caity Lotz) murder rocks the entire team, and they begin searching for whoever killed her. How they go about this varies depending on the individual, and while the culprit has not yet been found, they do manage to take down another assassin in the process.

Sara will be missed. While never a main character, she is a big part of the mythology. I’m sure we’ll see her again in flashbacks, but until then, it’s with sadness that we think of her, no longer a part of this group of heroes. Viewers want to know who took her out almost as much as the characters do.

Being the title character, Oliver (Stephen Amell) gets the most focus in “Sara.” Felicity (Emily Bett Rickards) accuses him of being unfeeling, but that dialogue makes absolutely no sense because Oliver is definitely, obviously, greatly affected. He might channel those emotions into rage and his work, but his single-minded determination should be enough to show that he’s not himself to anyone paying attention, and thus, the scene feels out of place and poorly constructed.

Sara’s death also leaves Oliver reaching out for family, which is understandable. Losing someone makes one re-examine their priorities, though one wishes that would drive him to Felicity, which it does not. Oliver misses Thea (Willa Holland), and so tries to get in contact with her, which is difficult, though Roy (Colton Haynes) eventually reveals why.

Thea is off becoming bad-ass under the tutelage of her father, Malcolm Merlyn (John Barrowman). One wonders just how she becomes so skilled at combat in half a year, but it’s nice to see her do something other than stand around and whine. This could definitely be the beginning of a new, improved Thea Queen, and that will be nice to see on ARROW.

Back to Sara. Felicity, for her part, lets the tears flow. She is also prompted to make a major life decision, taking a job from Ray Palmer (Brandon Routh), who, let’s be honest, leaves her little choice when he buys the tech store chain she works for. Still, it’s a conscious decision for Felicity to join Ray in his office, her old stomping grounds, and one can assume she leans towards him because he’s offering compassionate comfort, as opposed to Oliver, who is icy cold. Though, as stated above, her accusations towards Oliver are unfair, so while Ray may have more of what Felicity is looking for in a man’s reactions, she shouldn’t mistake Oliver’s lack of blubbering for a hard heart.

Diggle (David Ramsey) also changes direction, deciding to stay with Team Arrow. This makes sense, wanting to help avenge a friend. He may still retire to spend time with his family eventually, but it would be callous of him not to offer to help when many people he cares about are reeling. Though it’s a little strange how it is just tossed in that his baby is now named Sara. It sort of works, but feels a little off.

Laurel (Katie Cassidy) reacts the strongest, of course, furious at being unable to help her sister. In pursuing leads, she breaks the rules and probably should realistically be fired, even if the witness to the worst of her actions is dead. This is a dangerous, destructive path for Laurel, and while one might understand why she does what she does, it’s not sustainable, nor is it good for her. It’s almost as bad as the alcoholism, which, thankfully, she manages not to slip back to.

Why doesn’t Laurel tell their father, Quentin (Paul Blackthorne), about Sara’s passing? She may want to protect him, but surely it’ll be worse if he finds out later that she is hiding it from him. He has a right to know the truth. Instead, she offers no explanation to Quentin about her behavior, and he is far too forgiving of it.

“Sara” has some very uneven handling of personalities, as pointed out in the above paragraphs. Grief makes for great drama, and there is some of that in ARROW, but it seems like some choices are made for the sake of easiness and don’t quite work for the characters. I wish just a tad more care had gone into writing this episode, rather than forcing some decisions that just don’t quite make sense. It’s a good installment, not a great one, which it should have been.

Nor does the decision to have a flashback where Oliver is assigned to murder Tommy (Colin Donnell) seem like a solid one. I guess this is another type of grief shown here, but it doesn’t really fit all that well in the larger plot, and highlights once more why ARROW should ditch the constant backstory. It’s not necessary to have it every week. Though it is nice to see Tommy again; that goes without saying.