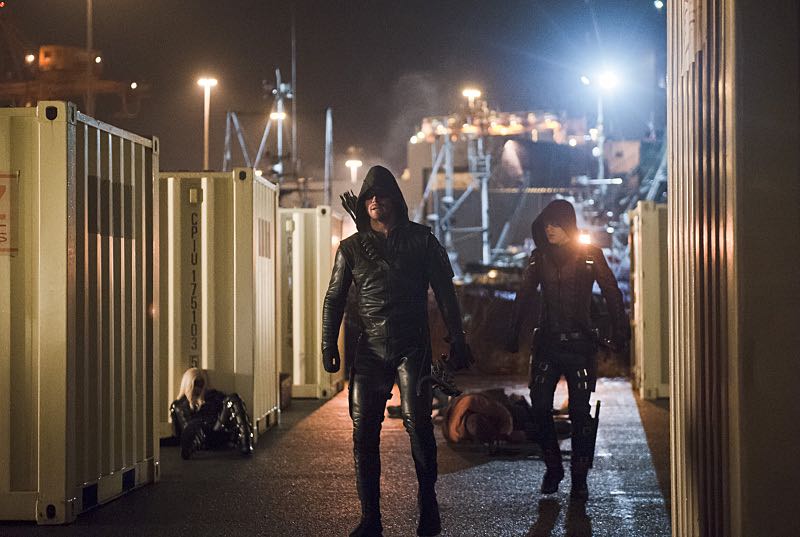 This week’s Arrow on the CW is appropriately named “Canaries” because it features scenes with the two Canaries, Sara (Caity Lotz) and Laurel (Katie Cassidy) throwing down. But the excellent episode is so much more than that. It also finds Oliver (Stephen Amell) trying to rejoin a group that has moved on without him, sees the return of an old foe, and exposes a couple of key secrets to important characters that have been kept in the dark too long. In short, it’s heavy on the serial storytelling and has some very dramatic moments.

Without Oliver, Diggle (David Ramsey) assumes a mantle of leadership that allows Felicity (Emily Bett Rickards), Roy (Colton Haynes), and even Laurel to make their own decisions. Oliver’s non-democratic reign is over, and that’s how it must be because no one can adequately replace him. After this taste of a new way, though, no one wants to go back into the box Oliver tries to place them in, and that throws Oliver off, who assumes he can just come back in and pick up without missing a step. The dynamic of Team Arrow is off in “Canaries” and a new one must be forged.

It’s gratifying to see Oliver quickly relent to what the others are doing. A year or two ago, he would not have done so. This was his mission, and the others were simply supporting him. Now, they are on their mission, and he is only one of many components, not the component that the others revolve around. Oliver could easily get angry at having lost what he dedicated himself to, but instead sees the value of the others and doing things their way for a change, and so (mostly) readjusts. He’s a little slow to switch from protector to teammate with Laurel and Thea (Willa Holland), but at least he’s trying.

Oliver’s reaction may not be expected, but even more surprising is how Thea takes the news that Oliver is the Arrow. Oliver long expects her to be mad that he’s keeping secrets, and Diggle firmly advises Oliver not to tell Thea, lest he lose his sister. But Thea is more mature than she once was, and she sees that this particular secret, unlike the others in the past, is for a good reason. She is grateful to Oliver for protecting her and the city, and happy to know the truth.

Both of these things are happy, easy resolutions to conflict, which is not what hour-long television shows usually do. Most programs will seek to draw out the fights between characters because dramas need drama, and that’s fair. Watching ARROW make the opposite choice throws me off a bit, in a good way. It shows this series isn’t stuck in entrenched paths and will find its own way. Plus, ARROW has plenty of stuff for the characters to fight against and fight about without making everything a chore. Our heroes have been through enough, and they deserve this break, as do the emotionally drained viewers.

A consequence of Thea learning about Oliver is that her eyes are opened concerning Malcolm (John Barrowman). Knowing Malcolm has long been aware of Oliver’s secret persona casts new light on his motivations, and helps Thea see Malcolm as the others do. He is no longer someone she is loyal to, which is a relief. Thea will work with him reluctantly because Oliver convinces her they need Malcolm, and because she is almost killed. But the daddy / daughter days are done.

One reveal that does not go so smoothly is Laurel finally coming clean to Quentin (Paul Blackthorne) about Sara’s death. Her father isn’t angry, as she imagines in a terrific scenes under the influence of Count Vertigo’s (Peter Stormare) drugs. Instead, he’s broken, Blackthorne wonderfully conveying the pain of a man who has lost his child twice. Even better is when Quentin gives Laurel an out to the truth, letting her know he knows she’s taken up the Canary mantle, but she bravely pushes on to the full story, as she should have done months ago. This is the natural ending to the arc, and it is incredibly moving.

Lots about “Canaries” goes right. While the fights between Laurel and Sara are a little tame because they are so one-sided, I find it hard to find fault with the rest of the hour. ARROW clearly knows what it is and the writers get these characters’ voices. The story is consistently interesting and surprising, and where there are plot holes, they tend to be small ones. Now, if only they would ditch Oliver’s persistent flashbacks, which dare I say seem close to the end, this series would really jump near the top of my favorites list.