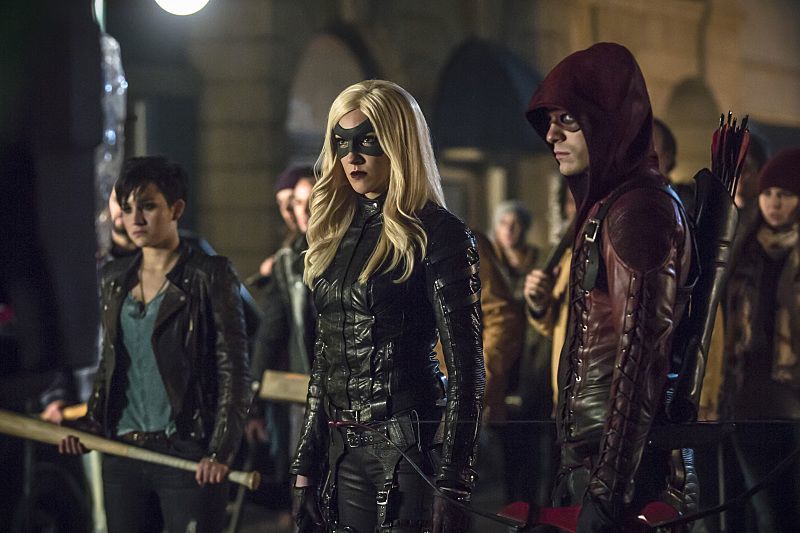 This week’s installment of the CW’s ARROW is called “Uprising,” though I would certainly contend that the series has been raising its game for more than just this single hour. With the police having given up The Glades to Brick (Vinnie Jones), Team Arrow is left defending the lawless neighborhood on its own, which they are not quite up to. Looking for options, they receive an offer they are very tempted to refuse.

“Uprising” is an excellent episode. It pits our heroes in a losing situation, testing their mettle and their moral compass as they seek to find a way out of it. Malcolm’s (John Barrowman) offer of assistance could end the fight with Brick, but it will also cost them a bit of their soul, teaming up with the man who killed their friend and almost destroyed the city. Yet, they are divided on whether to accept. Even when compromising their code appears to be the only solution, some of the team want to take the higher ground, and those people win out.

Roy’s (Colton Haynes) reasons for wanting to work with Malcolm do not stem from desperation. After a talk with Thea (Willa Holland), Roy sees that Malcolm may be redeemable. Malcolm is misguided, but at least he cares. This highlights Roy’s sensitive side, and also makes Malcolm far more interesting, enhanced by flashbacks that show how he becomes a murderer in the first place. These flashbacks are way more interesting than the ones we usually get with Oliver (Stephen Amell). Roy could also just be championing Malcolm because of his feelings for Thea, though.

Laurel’s (Katie Cassidy) reasons for wanting to join with Malcolm have to stem more from desperation, right? After all, Malcolm is responsible for Laurel’s sister’s death, and Laurel knows this. It’s surprising she’s willing to set that aside and work with the monster, a sign of just how dire things are.

Diggle (David Ramsey) is the one who makes the final decision, backing up Felicity’s (Emily Bett Rickards) objections. Diggle is trying to fill Oliver’s shoes, taking on the mantle of leadership. Being in charge is not easy, and that person must make some tough calls. Diggle does what he thinks Oliver would do, and what is the more noble thing, and that’s refuse Malcolm. It may make Team Arrow’s job tougher, but it makes sense.

Diggle also comes up with another idea, and that’s to get the citizens, including Ted Grant (J.R. Ramirez) and Sin (Bex Taylor-Klaus), to rally and stand with the costumed heroes. It’s a genius plan, really. The superheroes work on behalf of the population, so it makes sense to ask the population to repay that protection. Their battle seems epic as the sides clash, like a blockbuster film, though obviously with fewer extras and less impressive sets than, say, Lord of the Rings.

There is one problem that stems from this war, though, which ends with victory for the good guys. The more people let in on a secret, the harder it is to keep it. Sin immediately recognizes that Laurel is not the same Black Canary that she’s used to. In turn, she mentions this to Quentin (Paul Blackthorne), whom Team Arrow has been lying to. This will not end well, though “Uprising” does not reveal what happens.

“Uprising” also features the return of Oliver, a.k.a. the titular Arrow. I think this comes a bit too early. Arrow-less Team Arrow has been through many challenges, but they have not gotten anywhere near boring nor played out everything they could. I wish this story would have been stretched out just a few more weeks. If the writers didn’t know what else to do with Oliver in the cabin, he didn’t have to appear in those episodes at all.

As Oliver comes back, he strikes up a deal with Malcolm. He can be forgiven for doing so because he has a very different perspective on things than his team, with additional knowledge about who Malcolm is and was. But it’s also easy to see why Felicity and Diggle would feel betrayed, thinking they were upholding Oliver’s righteousness and being disappointed that Oliver himself will not do the same. Felicity, in particular, doesn’t give him a chance to explain, which again, is understandable because she’s experiencing very strong emotions upon learning Oliver is not dead, as she thought he was. All in all, it’s a messy return.

“Uprising” presents an exciting, engaging story, challenging our heroes and expanding our minds about who some of the characters are. Something ARROW has been doing extremely right this season is deepening the mythology and the players, and I’m happy to see that trend continue.