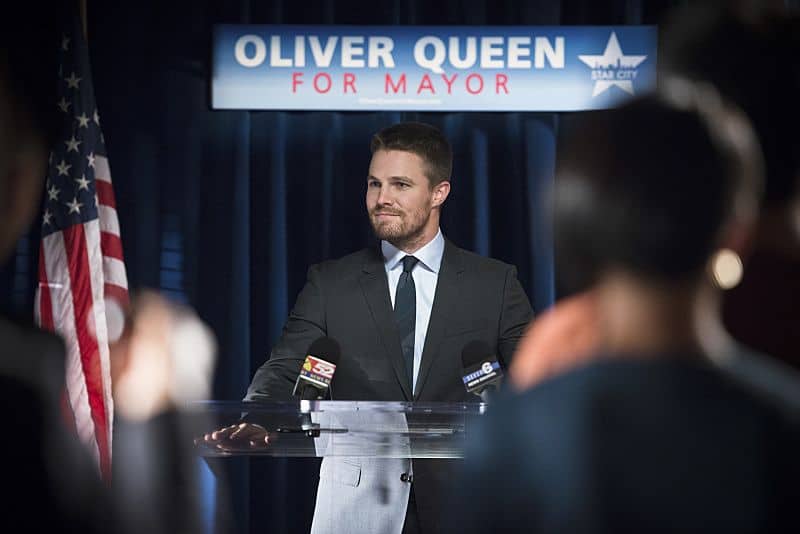 No one on the CW’s ARROW is “Beyond Redemption,” or so it seems in this week’s installment. Captain Lance (Paul Blackthorne) doesn’t approve of Oliver’s (Stephen Amell) plan to run for mayor of Star City, even though it’s Lance’s own noble nature that has prompted Oliver’s actions. It’s Lance, however, who is ashamed when Oliver uncovers more than one secret about the city’s police force. Yet, by the end of the hour, all is happy and as it should be in the world.

“Beyond Redemption” begins its upbeat run by introducing the new lair, secreted beneath Oliver’s campaign office, former site of a villain’s own democratic activities. With Diggle (David Ramsey) and Oliver back on good terms, it’s satisfying to see the crew settle into their new digs, funded by Palmer Tech (at least until the board revolts and kicks loose-money Felicity (Emily Bett Rickards) out of the CEO spot, which is certain to happen before long). This is how fans want to see the cast, one united front, bent to stop the bad guys in the city.

Star City has plenty of crooks, but perhaps none are so surprising as Liza Warner (True Blood’s Rutina Wesley) and her band of vigilante strike force officers, who are making money off the backs of criminals. Lance is shocked and angry to learn about this group, and quickly joins forces with Team Arrow to bring them down. Which they do, appealing to the morality left in Liza, who is a cop for a reason.

Along the way, Oliver and Lance come to an understanding. The revelation that Lance has been suckered into working with Darhk (Neal McDonough) knocks the captain down a few pegs to Oliver’s level. Both men have screwed up, both men are ashamed about it, and both are determined to make up for past wrongs. Lance even intends to turn himself in until Oliver stops him. Finally on equal footing, their bond over this adventure heals the last rift in the central group.

Which is good. If Oliver is going to run for mayor, he needs a united front around him. Other candidates have met with ill fates, and while Oliver is more capable than the others, he still needs the support of his team and the police. Oh, and a bit of help from Thea (Willa Holland), whose trip to Nanda Parabat seems to have had the desired effect, as she’s bright and ready as the campaign manager, doesn’t hurt.

Unfortunately, there is one slight hiccup in “Beyond Redemption.” The Sara (Caity Lotz) that Laurel (Katie Cassidy) brings home to Captain Lance doesn’t seem to be the same Sara that died. This one is feral and creepy. Not to mention, Oliver and the others aren’t aware of what Laurel and Thea did. And Sara escapes. But that’s all strife for another installment of ARROW, not this one.

In the B story this week, Felicity resists Curtis’ (Echo Kellum) attempts to unlock Ray Palmer’s final message. I understand Felicity’s reticence, but clearly Ray is not going to give her a choice. Her haywire phone is due to his tech, and it would not surprise me if the problems with the power in the new lair are related, too. Ray wants to be heard, and with Curtis determined to help him, he will be.

When is Curtis going to be brought onto Team Arrow? Don’t get me wrong, it does feel like ARROW lets too many people in on the secret too quickly, and it’s nice for Felicity to have a life apart from the group. But Curtis is way too helpful and observant to be left on the sidelines for long. He is going to join up, probably sooner rather than later, and I think the writers have drawn it out enough.

“Beyond Redemption” has a few minor flaws, such as Oliver’s easy catch of Liza after she shoots down one of his arrows with far less warning, and the fact that ARROW still insists on showing flashbacks to Oliver’s time before the series. Other than that, though, this is a feel-good, action-packed installment of the enjoyable series.