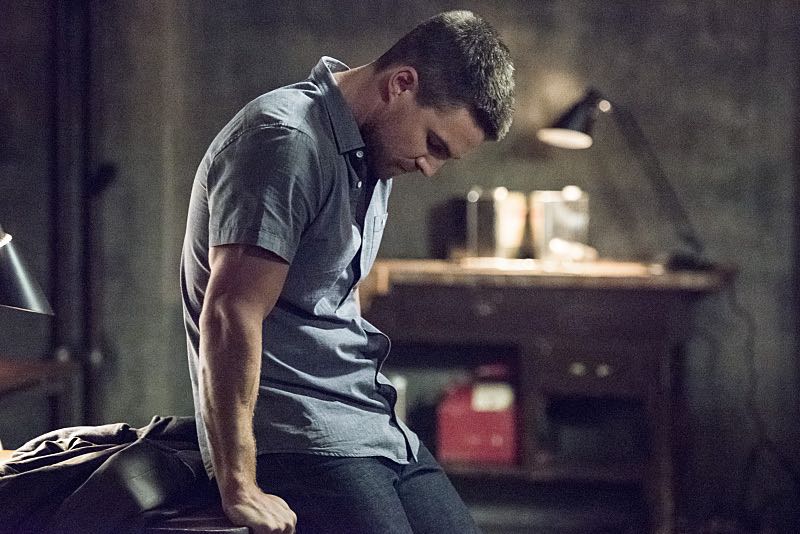 Last scene literally driving off into the sunset, Oliver Queen (Stephen Amell) and Felicity Smoak (Emily Bett Rickards) seemed to have finally achieved their happily-ever-after.  But did they?  As Season 4 opens, life in the suburbs only appears idyllic on the surface.  There is only so many soufflés that cover up the fact that Oliver and Felicity’s domestic bliss has begun to show some cracks.  That is not to say that their love-life is not just as hot as ever, but even marathon bouts of sex is not enough satiate the souls of heroes.  Make no mistake, every since that fateful day when  Oliver ended upon the cursed island of Lian Yu, Oliver was destined to live no ordinary life.  He returned to Starling City with mission to eradicate the evil that had taken root and festered, and that mission carried him through his various incarnations of the secret identities known as the Hood and the Arrow.  But in by the end of Season 3 and after Roy’s (Colton Haynes) apparent death clearing the way for Oliver to finally be free of the responsibility of being Starling City’s self-appointed protector and hero, Oliver seemed to embrace that golden ticket to pursue a quite life with his lady-love Felicity.  Little did either of them know at the time, that a life of quiet and calm was really not what either of them were cut out for.  When we see them again, Oliver and Felicity are madly in love, but not sure what the next step is in their lives.  Dare they move forward or dare they look back at what they left behind? Fate again intervenes and makes a move that propels them towards a new future.  Yet this time not everyone is willing to welcome the hero and his lady back so quickly.  Back in Starling City, now renamed Star City in honor of Ray Palmer, who was blown up in the Season 3 finale, a new evil has risen and is about to take claim over the entire city: Damien Darhk (Neal McDonough).  Diggle (David Ramsey), Thea (Willa Holland), Laurel (Katie Cassidy), and Detective Lance (Paul Blackthorne) are struggling to keep Damien from terrorizing and killing anyone in his path, but he appears unstoppable.  Just how is Damien Darhk able to fell his enemies so quickly and with such ease?  Well, Oliver is quick to recognize that the League of Assassins handiwork and tricks — there is mysticism at play.  It is not all smoke and mirrors.  The power Damien possesses is real and deadly, and even Oliver appears outmatched once in the crosshairs.  What will take to combat a man so ruthless, remorseless — and apparently unstoppable and impervious to arrows and bullets?  Season 4 sets off a chain of events that will take our heroes on a perilous journey to eradicate this latest evil intent on infecting and conquering their city.  To find out just how Oliver, Felicity, Diggle, Thea, Laurel and Det. Lance shall fare in the brewing war against the H.I.V.E.  and its “ghosts,” be sure to tune in for the Season 4 premiere of ARROW on Wednesday, October 7th at 8:00 p.m. on the CW.