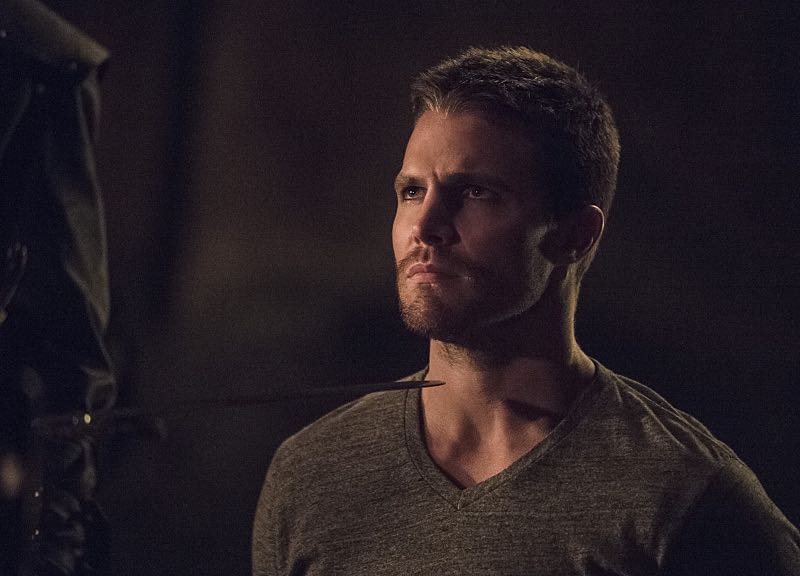 You are probably trying to pick your jaw up off the floor right about now.  As if it were not shocking enough that Ra’s Al Ghul (Matt Nagle) offered to hand over the League of Assassins to Oliver Queen (Stephen Amell) as his new successor, there is that little matter of Felicity (Emily Bett Rickards) and Ray (Brandon Routh).  At this point, it is important to remember that the show never promised anyone a rose garden.

Half way through Season 3, the show is still picking up momentum as it mythology and characters become much more complicated and intertwined. Would the world of ARROW ever really have been complete without dealing with Ra’s Al Ghul?  Definitely not.  It was also foreseeable that Oliver would lose to such a skilled warrior who was accustomed to handing out death to those who opposed him.

The other storyline that had to be addressed was the rise of Ray Palmer.  The future of The Atom was also foreshadowed and, given Oliver’s firm dismissal of a relationship with Felicity at every turn, it was not unexpected that she would choose to move on with her life.  Olicity fans hearts are broken across the fandom, but they may have forgotten:  their story is not over yet.  ARROW is only in the middle of its third season.  There is many more turns and twists to unravel and surely one could lead Felicity back to Oliver in time.

So as fans are shaking their heads wondering “what the hell?!”, it is important to remember this is just one episode — one chapter in a long story.  There is so many more episodes and stories to watch unravel.  Let’s just see where the story goes. Maybe Oliver is the next leader of the League of Assassins, and if he is, what does that mean?  It means the removal of the death sentence hanging over Oliver and Thea (Willa Holland).  It also means that they do not necessarily need Malcolm (John Barrowman) anymore — and that alliance could be toast.  Maybe this is how Malcolm Merlyn returns to being the villain in the story and not just a mere questionable ally out of necessity.  It would be easy to see him as the big bad villain once again.

I, for one, am dazzled by the possibilities and cannot wait to see how it all plays out.

To help glean a bit more insight as to the events that occurred in this week’s episode “Nanda Parbat,” here is what stars John Barrowman and Katrina Law had to say, along with insight from executive producers Marc Guggenheim and Andrew Kreisberg:

Where Will Next Episode Pick Up

Marc: “It picks up literally 10 seconds before the end of this episode.”

Andrew:  “You want to keep that conversation going.  Oliver, like hopefully the audience, is completely taken aback. . . To have Ra’s [Al Ghul], who presented as this giant malevolent force, to come up and basically offer the keys to the kingdom to our hero — it just felt like such a different way to go and a different relationship for Oliver to have with the villain.  What Oliver’s reaction to Ra’s offer — the next episode is actually called ‘The Offer’ — what Nyssa’s reaction to it is, what everyone’s reaction to it is — that is the next bulk of episodes:  what his answer is and what that prompts all the other characters to do. . . .What Oliver is willing to do to end the threat of the League, and now it is a different kind of threat because they are asking him to join up and, as Malcolm tells him in a subsequent episode, [Ra’s] not really asking.  That leads to all sorts of interesting combinations and new paradigms.”

Marc:  “By ‘pleasantly,’ she means unpleasantly.”

Andrew:  “Nyssa is the heir to the demon. So you can imagine how she feels when she finds out that what she considers to be her birthright is being handed to Oliver.”

Marc:  “There is a scene in episode 316 between Nyssa and Ra’s that definitely addresses that.  From Nyssa’s perspective it has everything to do with Sara.  From Ra’s perspective, maybe — maybe not.”

Andrew:  “The best part of this season is, unlike these other people who had normal lives and tragedy turned them into what they were, [Nyssa] was turned into what she is from birth.  She’s actually going on a different trajectory where she is seeing what kindness looks like for the first time and she’s seeing what normal people look like for the first time — especially when what she considers to be her inheritance is taken away from her — it sends her on a completely different journey.”

Andrew:  “Part of the fun of watching couples on television is keeping them apart and watching how other people come in and out of their lives.  There are a lot of people who believe that Oliver and Laurel should be together or that Oliver and Felicity should be together — and we are not sure how it’s going to end up.  We just do what is right at the time.  For right now, Oliver has decided that ‘I can’t do this’ and Felicity is not going to just sit around waiting for him.  I think that she’s the healthiest of all of them.  He’s the one who is shutting himself down emotionally when he has this amazing person, who is basically offering him hope and guidance and friendship and love and everything — and he doesn’t feel he deserves it and he doesn’t feel that is what is best for her — whether she agrees with it or not.  Then you’ve got Ray, who is in a lot of ways is a real analog to Oliver.  He’s had a tragedy and he’s trying to do right by it, but [Ray] is opening his heart to her.”

Andrew:  “I think Willa as Thea has just like risen to such amazing heights these last few episodes and it continues in this one in seeing what she is willing to do and what Oliver is willing to do for her soul.  We talked really early on that this season is really the fight for Thea’s soul.  More than anything, a victory this season for Oliver is saving Thea and she is caught between these disparate forces.”

Marc:  “We’re working towards telling a different story with Thea.  It’s not always her acting out.  She’s processing a huge amount of guilt and a huge amount of regret.  At the end of episode 315, she is essentially attempting suicide-by-Nyssa, so it’s a continuing progression.  It’s not going to be a repetition of her acting out.  In episode 316, she looks for closure in another way.”

Andrew:  “Seeing what happens to Merlyn after these episodes — it’s the most screwed up family show we could possibly think of. . . Just because the death threat to Malcolm is gone does not mean he is out of the heat.”

John:  “The one person he fears is Ra’s and he’s always touched on that prior when talking to Thea — like when he says ‘We need to leave the city’ — that element is always there.  He knows he is not in control, but at that point there is not much he can do.  He has to face the maker.  And he knows what [Ra’s] can do because [Malcolm] was one of his assassins and doing his dirty work for him.  So he knows what Ra’s capable of.  It is important that you see the fear in Malcolm.  The one thing I hear from people who have fallen for Malcolm, the best compliment that they give me is: ‘Oh my god, we hate you, but we love you.’ They get why he is doing it.  They understand why he is doing what he is doing.  That’s why it is important to me to show that emotional side to him.  That’s what the fans then connect with. They see it is not just a villain.  There is something right behind it.  There is a reason for why he is doing it and there is a reason as to why he is scared.”

Marc:  “I’m really excited for people to see the full Atom suit in its full glory — the first time Ray flies.  It’s a big moment for us. . . to get this kind of character on the show. . . Episode 317 is the episode to check out — there is a new superhero in town and he is going to go about things in a very different way than the Arrow does, and he is not a part of Team Arrow.  Right now, he is just a very smart guy in a very powerful suit.  Oliver is definitely going to have an opinion.”

Laurel Taking on Merlyn and Bonding With Nyssa

Andrew:  “Watching Laurel with more verve and skill think that she can for one second take on Malcolm is just another example that she is not the Black Canary yet.  Sara might have gotten him, but there is no way Laurel can and yet again, she gets knocked down and she gets right back up again.  That’s what we really love about Laurel.  But seeing Laurel and Nyssa in upcoming episodes.  We’ll be seeing that relationship form.”

Katrina:  “I feel journey-wise between [Laurel and Nyssa], I think the two of them have more in common than originally thought.  I think the Laurel character lived a fairly smooth life of going through the ins and outs of life and life was good and all of a sudden she lost her sister and now she lost her father and she’s trying to do something that she is not necessarily good at — which is the Black Canary, but she will be.  And I think Nyssa is going through the same journey — trying to figure out who she is now that she has lost everything how to be a softer human being with compassion and sympathy and all of these things she didn’t have to think about before and making choices on her own without her father or the League’s guidance. So I think between the two them, they might have more similarities than they think.  Plus, they’re both kind of having daddy-issues right now.”

Katrina:  “Nyssa’s journey moving forward is going to be very interesting because she was so dead-set on who she was, what she was going to be, how she laid out her future for herself and now everything has been thrown up in the air.  She is no longer the heir to the demon, she no longer has her lover who I am sure she was thinking about keeping around forever, so she is essentially at this point in the story — she has lost everything — and I think for the first time in her life, she is vulnerable and she is weak and she feels useless and doesn’t know where she stands or who she is at the moment.  And I think it’s very jarring for her because she never had to go through that, ever, in any capacity in her life before.  So you are going to see Nyssa trying to figure out who she is and what she stands for now.”

To find out what the next explosive chapter of ARROW has to bring as to the final fates of Malcolm Merlyn, Nyssa, Oliver and everyone else, be sure to tune in for all new episodes of ARROW, when the show returns on Wednesday, March 18th on the CW.