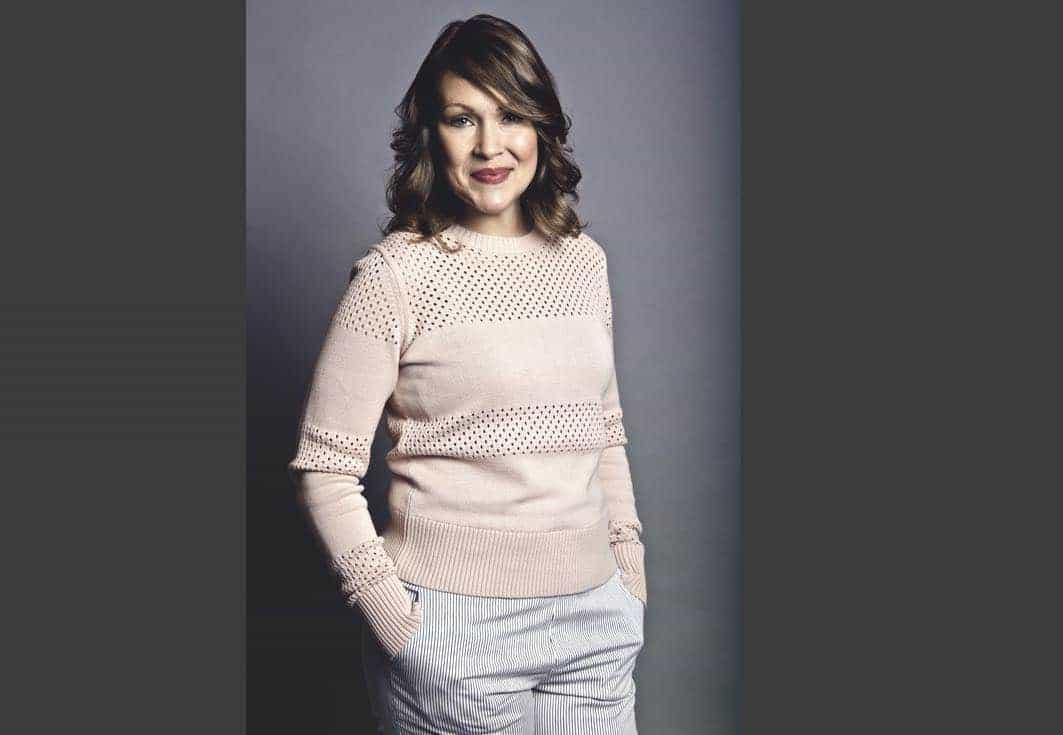 What the fans of FXX’s ribald comedy series ARCHER may not know is that behind the persona of the infamous character of Pam Poovey is the lovely actress Amber Nash.  It can be challenging standing out as the face of an animated character, but thankfully, Amber is just as forthcoming as Pam Poovey and, surprisingly, accessible to fans.  In fact, Amber relishes the chance to interact and let folks know just about anything about the show and her character Pam Poovey.  In an exclusive interview, Amber talks about the joy of portraying Pam Poovey in Season 8 of ARCHER and where she is at in her career right now.

You have been portraying the role of Pam Poovey and working on ARCHER for a number of seasons.  What continues to appeal to you about the role?
AMBER:  I’m so lucky to have the opportunity to play such an amazing character year after year. The character has grown and changed so much over the years, she is such a badass and can do anything. I’m proud that she is sex positive and body positive and just doesn’t give a shit. I also think that the show stays fresh because it takes risks, which I think is very important for comedy. We are always changing things up.

How would you describe who Pam Poovey is at this point?
AMBER:  For Season 8, my character is referred to simply as Poovey and is gender neutral. Poovey is a cop and partners with Cyril. This season is set in 1947 and it looks amazing.

What do you most admire and/or like about Pam?
AMBER:  It’s that she is totally unapologetic about who she is and is literally capable of anything! From drift car racing, street art, underground fighting, cooking, feats of strength, feats of sex. It’s amazing.

What has been one of your favorite Pam Poovey scenes?
AMBER:  I really love the episode “Southbound and Down” from Season 5 ARCHER: Vice because it’s Pam and Archer on the road together being jerks and pals. I think they are a great pair.

Any favorite quotes?
AMBER:  “Holy Shitsnacks!” is a favorite for sure. I also like, “neckbones and shut yer dickholster.”

What is it like working with such a strong ensemble cast?
AMBER:  It’s amazing, we all really like each other. I think that’s because we don’t work together but when we do get to see each other at events or cons it’s super fun. Everyone is so funny and amazing.

What has been your favorite part about working on this project?
AMBER:  Being able to see this character through so much growth and transition. I also love that so many people have responded so positively to Pam and love her because she is a bigger gal and has become a sex symbol.

What you have learned from portraying Pam?
AMBER:  I’ve learned that I can’t speak Mandarin and that I do a terrible Jamaican accent.

What has been the one thing you as an actor haven taken away from working on ARCHER?
AMBER:  I’ve learned a lot about what goes into making television, specifically animation. It’s amazing how many people work so hard to make this show happen. There is a lot of talent behind the scenes.

What do you hope viewers continue to take away from watching ARCHER?
AMBER:  How smart the show is. We often get called dirty, but we’re also a very smart show, we earn the dirty that way.

You have received quite a bit of praise for your outstanding work in the role of Pam Poovey. What has been the thing you are most proud of about your work?
AMBER:  I think it’s bringing this person to life. In the beginning, Pam was just kind of a punching bag and then I think Adam Reed the creator and writer saw what I could do and what Pam could do and she grew from there.

Is there anything about being a voice actor that you find particularly challenging?
AMBER:  Occasionally, it’s trying to get all of your acting out with just your voice, but honestly the directors are so amazing that it makes my job very easy. It’s also been hard to get other work that’s a challenge for a lot of actors I think.

What has surprised you most about your career so far?
AMBER:  That I’m even here in the first place and that I made it on to such a gigantic hit that is so loved and that we are going into Season 8, it still doesn’t seem real.

Then what are the perks of where you are in your career right now?
AMBER:  I’m so fortunate that I get to make a living doing what I love, it’s an absolute dream. I would be in the booth or on the stage or on a set everyday if I had the chance. I’ve also been able to see the world through touring doing improv and cons and events.

If there were one role you would like to revisit, which would it be and why
AMBER:  Ha, I played Ebenezer Scrooge in a show called “Invasion: Christmas Carol.” It was a scripted and improvised show and I loved it so much. It was my favorite role. I would do that again in a heartbeat. I love playing old men.

You seem to take on roles that are very challenging. Do any of your characters and the situations they find themselves in ever leave a lasting impression on you?
AMBER:   I think Pam will be with me for the rest of my life, she really is an incredible character. I write Pam’s twitter feed @pamsgossiptrain and its been so fun exploring her life outside of the show.

Has there been any great advice you have gotten?  What advice would you offer to other upcoming and aspiring actors?
AMBER:  A friend relayed advice that had been given to a friend of his and it’s that: when you surf, you have to paddle out and catch a wave and once you do, you don’t just jump to the next wave, you must end up back on the beach and paddle out again to catch the next one. So, it helps to know it’s ok to end up back on the beach. I believe that the number one, most important thing about building a career is that you need to be good to work with or people won’t want to work with you.

Do you have any other upcoming projects that you can share that fans should keep an eye out for?
AMBER: We have a web series online called “Hart of America” (www.hartofamerica.com).  It’s fun and weird and I play the 3 main characters. It’s ten 5-minute episodes. Most people have never seen me in live action projects before.

At a time when women’s voices are rising to be heard and respected around the country and world, what do you recommend your fans do to lend support in that endeavor?
AMBER:  I love this question! Keep seeking out stories about people that aren’t necessarily the people you are used to seeing stories about. Stories are a lot more exciting when we have characters/ actors with different voices, that are diverse.

To see what further escapades Pam Poovey embarks upon, be sure to tune in for the premiere of ARCHER Season 8 on Wednesday, April 5th at 10:00 p.m. on FXX.  Amber is still active in improv opportunities when she has the chance. More on her background and improv can be found here:  https://louderthanten.com/coax/an-interview-with-amber-nash

Amber can also be found on social media at: