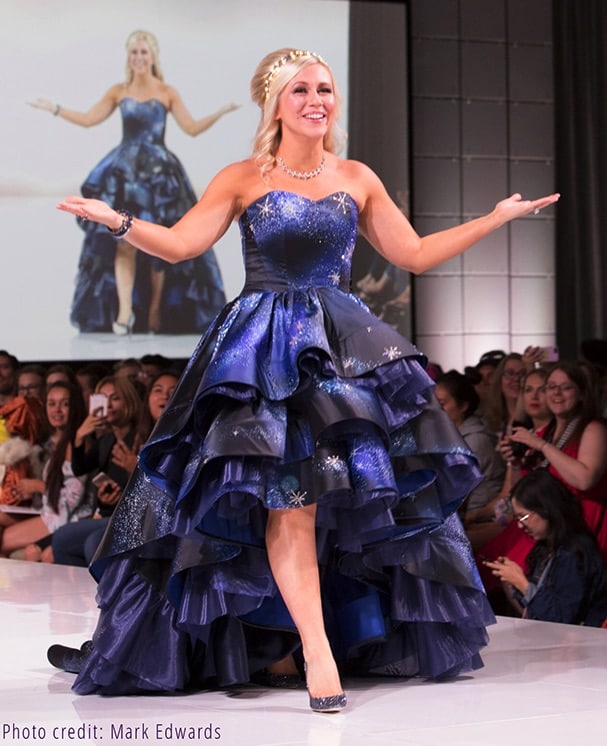 Once again, “Geek Couture” has invaded San Diego Comic-Con. The epicenter of geek fashion, the 4th annual Her Universe Fashion Show, presented by Her Universe and Hot Topic, debuted 25 stunning fashions inspired by the sci- and pop culture world last night. Only two designers could ultimately win the grand prize – the opportunity to design a fashion collection with Her Universe Founder Ashley Eckstein for Hot Topic. But this year – for the rst time ever – the judges declared a tie, and three designers were awarded the grand prize! The panel of celebrity judges chose both Rose Ivy for her design Sorceress Supreme based on Marvel’s Doctor Strange and Lindsay Meesak Orndorff for her design Leader of the Pack based on Studio Ghibli’s Princess Mononoke, while the audience awarded their grand prize to Grace DuVal for her design Don’t Panic based on The Hitchhiker’s Guide to the Galaxy. For the rst time, Ashley Eckstein announced the theme of the collection to be designed by this year’s winners at the show. The winners will design a Disney Princess inspired collection for Hot Topic that will be available in 2018.

Keeping with this year’s theme of transforming dreams into reality, Eckstein wore a stunning Cinderella- inspired gown designed and made by Her Universe Fashion Show Winner from 2014, Andrew MacLaine. The stunning gown was made with 55 yards of fabric and was hand beaded with over 5,000 crystals. During the fashion show, the actress and Her Universe Founder made a surprise announcement, sharing that she is writing a book for Disney that will be released in May of 2018 entitled It’s Your Universe! In the book, Eckstein will be sharing her inspiring stories and advice on how Disney taught her to “Dream, Wish, Believe, Do and Transform.”