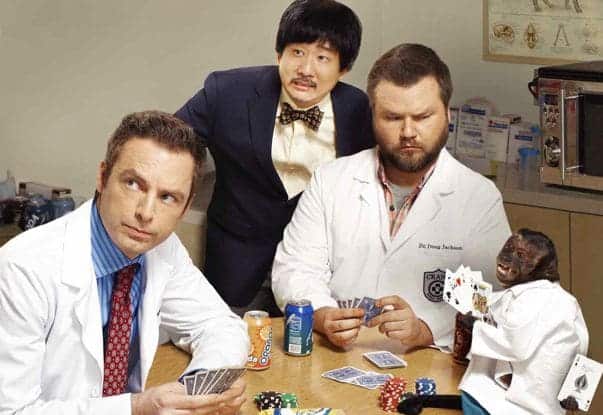 ANIMAL PRACTICE, a new NBC sitcom, is airing a special preview of its “Pilot” tonight after the Olympics. Set in a huge veterinary hospital, Dr. George Coleman (Justin Kirk, Weeds) runs the show in his unprofessional style, gambling while helping patients, assisted by Dr. Rizzo (Crystal the Monkey, The Hangover Part II, Night at the Museum, Community). Then his ex-girlfriend, Dorothy Rutledge (JoAnna Garcia Swisher, Better With You), takes over, and as they say, there’s going to be some changes around here.

It’s smart of NBC to air their new shows following a popular sporting event that lots of people tune into, considering that not a lot of viewers generally watch NBC shows. However, this only works for series that are smart and funny, like Go On. In the case of ANIMAL PRACTICE, it will probably be counter productive, confirming the negative opinions about the network, and not earning any extra eyeballs come September.

On paper, ANIMAL PRACTICE should be good. Kirk is brilliant in Weeds, Garcia Swisher is charming and funny, and they have decent enough chemistry. The animals, especially acting pro Crystal, lend an air of whimsy, and actually contribute positively, not just being used for gags, or wasted as set dressing. There is also a terrific ensemble, which includes Tyler Labine (Reaper), Bobby Lee (MADtv), and Kym Whitley (Sparks). Plus, the setting is unique and quirky enough for viewers to expect something original and neat, a la Better Off Ted.

Unfortunately, ANIMAL PRACTICE does not live up to the sum of its parts. The main problem, and I can’t believe I’m saying this, has to be Kirk. Or more accurately, Kirk in the part of Coleman. He just isn’t right for the role. I’m not asserting that Kirk can’t handle being the center of a series, as I don’t believe that to be the case at all. He just doesn’t feel right in this one, even though he should, given his past work. The entire half hour, I wished that Labine would switch places, and then there might be something here. But alas, no.

Coleman is supposed to not play well with humans, preferring the company of animals, but I think that part of the issue is that Kirk does display empathy to other people. He can’t help it. His character is allowed to show that just a bit, even as we’re hit over the head with the knowledge that he’s actually the opposite of this. This can shift, given time, but at the moment, nothing really adds up, and that’s unacceptable because he is the show’s lead.

The second change that should be made is to immediately fire Betsy Sodaro’s Angela. She is a weird person, which again, should be a good fit for this type of humor. But she’s too weird. Her presence is disturbing, and every time she’s in a scene, it distracts from what’s going on, in a bad way. She’s part of a new sitcom trend, like Jennifer Irwin’s Creepy Carol in Breaking In, that should never have been started. Again, the actress is probably fine, though I’m not familiar with her previous work. But unlike Kirk’s Coleman, she isn’t necessary, and I don’t see any way that she could become an acceptable part. Best just to ditch her now.