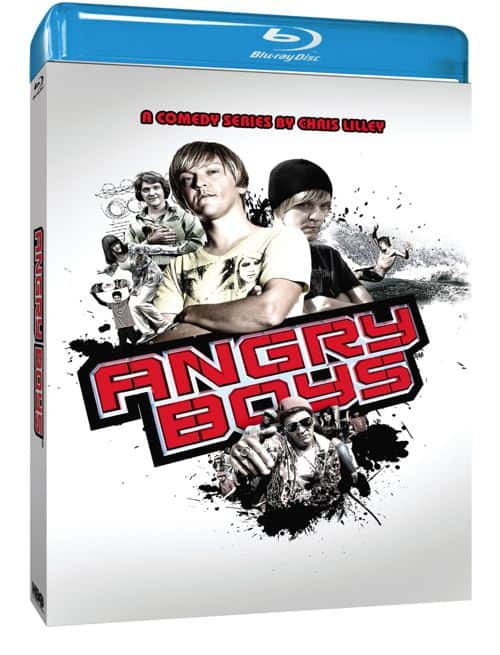 Seat42f and HBO have teamed up to give TWO lucky winners a copy of  ANGRY BOYS on BLURAY and WE CAN BE HEROES on DVD. For a chance to win leave a comment below telling us why you want to add ANGRY BOYS & WE CAN BE HEROES to your BLURAY/DVD collection. Only one entry per person. Contest ends December 7th. Winners will be notified on December 10th via email so make sure to use a valid email address when you post your comment.

Chris Lilley, Australia’s critically acclaimed comedian/actor/writer, is at it again! Recipient of an American Film Institute Award for Best Comedy Series and Best Performance in a Television Comedy for his earlier HBO® comedy series, Summer Heights High, Lilley amps up his acutely-observed, character-based comedy stylings in two outrageously funny and edgy series – Angry Boys and We Can Be Heroes. The taboo-crossing series are hilariously unconventional, impetuous and filled with endearing characters that will make comedy fans laugh and cringe at the same time. Full of entertaining bonus content, Angry Boys on Blu-ray ($39.98), DVD ($29.98) and Digital Download, along with We Can Be Heroes on DVD ($29.98) and Digital Download, will arrive in stores on December 4, 2012, just in time for holiday gift-giving.

In Angry Boys, Lilley uses his chameleon-like talents to play multiple roles in a mock-documentary look at the lives of average boys and men, displaying their day-to-day interactions and struggles to fulfill their obligations to family and friends. Loaded with over six hours of bonus features, Angry Boys on Blu-ray and DVD and includes an S.mouse concert and music videos, deleted scenes and bloopers.

The groundbreaking mockumentary We Can Be Heroes, which made its U.S. debut on HBO on Demand® and HBO GO®, follows the daily lives of five very special individuals who are among the thousands of citizens vying for the prestigious title of “Australian of the Year.” As portrayed by Lilley, the five nominees are from different parts of the country and represent the full spectrum of the country’s society.We Can Be Heroes on DVD has over two hours of extra content including deleted scenes, outtakes, a behind-the scenes featurette and “Ricky at the Logies” feature.