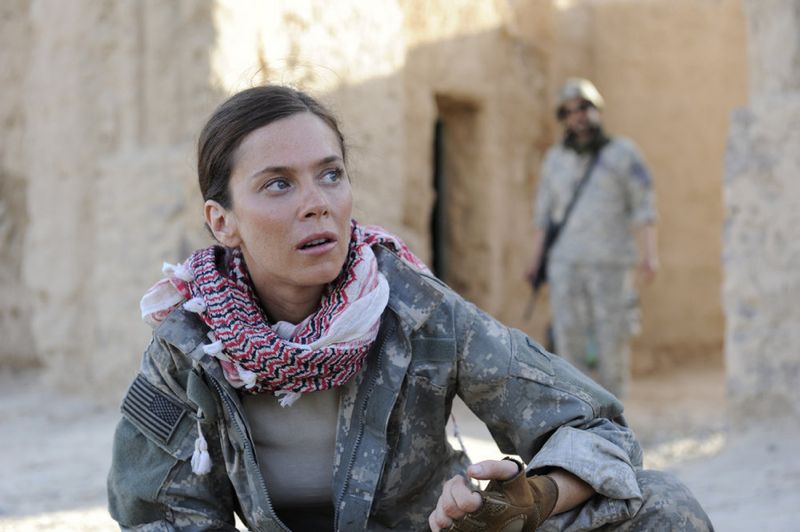 If you like semi-political thrillers, thought Homeland was just a little too complex and conspiracy-driven for you, but 24 is too action-packed and flat, then NBC has you covered with AMERICAN ODYSSEY. Set in the Middle East, Africa, and the United States, it has shady government agencies, murdering terrorists, and secrets that must be exposed for the good of the public, chock full of dangerous villains and noble heroes. Is it all too on the nose, though?

Were AMERICAN ODYSSEY the first program of its kind to the table, it might stand a chance at being something worth watching. The problem is, not only are there already a plethora of choices out there, but this one doesn’t rank near the top in quality. If you want a show like this that will keep you guessing, watch Homeland. If you like spy games, check out The Americans on FX. If you want to see a government that keeps secrets, well, The X-Files should be back on the air in the fall. All of this makes American Odyssey pretty unnecessary.

The plot is extremely formulaic. As we are introduced to the various stars, there are several scenes early in the pilot to introduce the factions and get things moving. Multiple bits in a row basically feature one of the leads running into someone they know but haven’t seen for awhile and learning something vital from said acquaintance. The first time this happens seems hokey; by the third instance in less than ten minutes, I was completely out of the story and marveling at how American Odyssey may know what pieces to play, but no sense of style in playing them.

The cast is great, but how many new dramas out there can’t boast that these days? Sadly, it takes more than familiar, talented faces to make a show like this worth watching right now, and this one just doesn’t make the cut.

In case you’re still curious, though, there are really three leads in AMERICAN ODYSSEY. The first, Odelle Ballard (Anna Friel, Pushing Daises), is the lone American survivor of a security force massacre conducted by military contractors, trapped far, far from home. Her husband, Rob (Jim True-Frost, Treme), and daughter, Suzanne (Sadie Sink), are told she is dead. Luckily, Odelle finds some assistance in the form of young Aslam (Omar Ghazaoui), who helps her evade the man who just missed killing her, Frank Majors (Adewale Akinnuoye-Agbaje, Lost).

Activist Harrison Walters (Jake Robinson, The Carrie Diaries) won’t let the public go on believing Odelle has been lost because he knows those no-good officials are up to their wicked schemes and is determined to stop them. Getting a tip from hacker Bob Offer (Nate Mooney, It’s Always Sunny in Philadelphia) and assistance from reporter Ruby Simms (Daniella Pineda, The Originals), Harrison is soon hot on the trail of Colonel Stephen Glen (Treat Williams, Everwood) and the others.

Thirdly, Peter Decker (Peter Facinelli, Nurse Jackie) is a lawyer who realizes something is up when a firm he is working for makes some strange moves. While Peter’s wife entreats him not to do anything rash, comfortable with the life they live, Peter is just too noble to look the other way, soon getting himself involved in the plot. He’d better be careful, though, because he has a daughter, Maya (Elena Kampouris, Labor Day), to look out for.

If all of that sounds a little too melodramatic, that’s because AMERICAN ODYSSEY is a little too melodramatic. It takes itself a hair too seriously, and tries too hard to sell its product. The fact that the show was retitled AMERICAN ODYSSEY when it was originally just called ODYSSEY basically tells you what you need to know about the direction the production is going in.

Which is too bad. NBC could use a good, strong political thriller with a sprawling cast like this, just one that is written and developed at a little higher quality. AMERICAN ODYSSEY isn’t bad, but it’s not great either, and with plenty of superior options, it doesn’t make enough of a blip on the television landscape.

AMERICAN ODYSSEY premieres this Sunday at 10 p.m. ET on NBC.