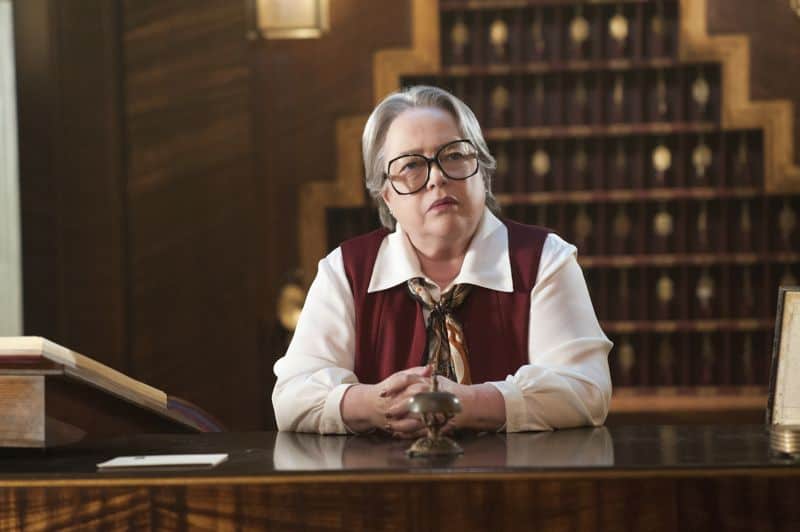 The acclaimed AMERICAN HORROR STORY is back for its new series, HOTEL. As fans have come to expect, AMERICAN HORROR STORY: HOTEL keeps much of the familiar cast, including Kathy Bates, Sarah Paulson, Angela Bassett, Evan Peters, and Denis O’Hare, with some other Murphy favorites, like Wes Bentley, Cheyenne Jackson, and Matt Bomer, thrown in. This time, the setting is an old hotel in modern-day Los Angeles, and the scary begins right away.

To help viewers ease into the world, the premiere, “Checking In,” starts with a couple of ‘normal’ people (Kamilla Alnes and 666 Park Avenue’s Helena Mattsson) arriving at the Hotel Cortez on vacation. This is nice because it gives viewers an ‘in’ to experience the world of the hotel, without needing any prior knowledge. We find out what the girls find out, and the disturbing, weird bits happen slowly at first, but not too slowly, to give the audience time to adjust.

We need the time to adjust because AMERICAN HORROR STORY: HOTEL is probably the weirdest of the five seasons thus far. It’s less clear who the characters are and what is going on than in the first four years, “Checking In” keeping plenty of secrets. This is not a complaint, but it certainly feels like a bit of a different approach, as past seasons generally gave us at least a few main people whom we could understand right off the bat.

The closest we get to that in episode one is Iris (Kathy Bates), who works the reception desk. The reason she is at the Hotel Cortez is explored in the first hour, helped along by a flashback to the mid-1990s. I believe we’ll get others as time goes on, but most of the main cast, including The Countess (singer Lady Gaga), are much more shrouded in secrecy, and it will take some weeks before viewers will begin to understand them.

As usual, the entire main contingent does not show up right away. But those that are present are, without fail, very interesting. Wes Bentley makes a great hero (presumably) as police detective John Lowe. Sarah Paulson finds yet another completely different personality as Hypodermic Sally. Matt Bomer is magnetic as The Countess’s lover. Chloe Sevigny makes Alex Lowe anything but the typical housewife, and is already showing a lot of complexity. Denis O’Hare is particularly marvelous as Liz Taylor. And we get a disturbing scene with guest star Max Greenfield, who departs quite far from his role of Schmidt on New Girl.

Those people are the reasons viewers will want to tune in weekly for AMERICAN HORROR STORY: HOTEL. Creators Ryan Murphy and Brad Falchuk have become experts at taking a bunch of very, very talented actors and letting them play parts that showcase their range and stretch their skills. It’s an absolute pleasure just to see the roles that these actors create, and even the most villainous of them find a way to make us care about them. “Checking In” only teases what this season has in store, but even with it being light on the mythology of the miniseries, it finds a way to hook the audience.

Will AMERICAN HORROR STORY: HOTEL be as great as Freak Show or the first season, my two favorites? My gut instinct tells me no, but it’s pretty early to make that judgment. I already like it a bit better than the worst of the bunch Asylum, which was still a very good batch of television installments. The important thing is that it is worthy of the franchise and kicks off the season in an intriguing manner.