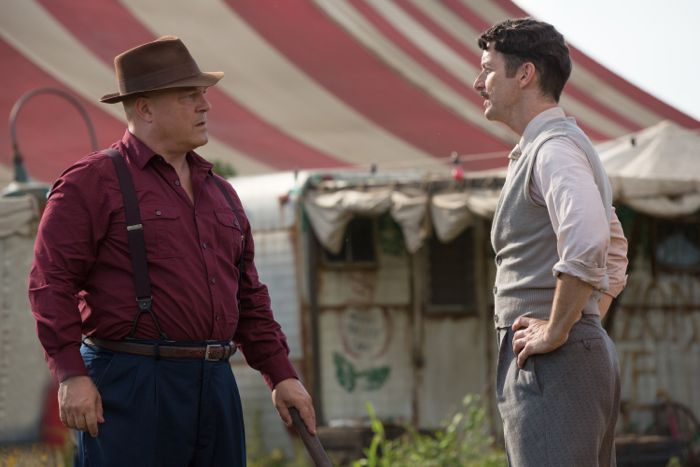 Dell is becoming quite the complicated character on this show. He was at times lovable, laughable and hate-able, depending on what was happening.

I’ll admit to feeling some sympathy for him, especially when he went looking for poor Andy in that bar. That turned out to be a mistake as Stanley spotted him there and of course found a way to use that to his advantage. He hadn’t had much luck getting Maggie to deliver the freak he needed for his big payday, so he put Dell to the task.

Dell’s initial attempt to fulfill his debt didn’t work out at all when he tried to take on Amazon Eve. He learned very quickly how futile that was and it got him into deep trouble with the rest of the performers. I wanted to cheer when Ethel told Jimmy that they had to handle the issue themselves and if he didn’t do it, they would.

I think Ethel hoped that all her years of hating Jimmy’s father and keeping his identity a secret would prevent exactly what happened when Dell and Jimmy were alone: They bonded. I didn’t think Dell had it in him to accept his son, but apparently a lot can happen when father and son share some drinks together. Even Dell’s attempt to knock Jimmy out seemed half-hearted at best and I know he wouldn’t have actually gone through with killing his own son.

Sadly that meant Dell had to go elsewhere to keep Stanley happy and poor Ma Petite paid the price. That was the moment I hated Dell. I loved Ma Petite and I hate what he did to her. I now have a strong desire to see something horrible happen to him so I’m hoping that Dandy decides to make a victim of him in the future.

Elsewhere in the camp, the twins returned. But rather than tell the truth about what happened, they, or should I say Dot, used it to their advantage. Dot is definitely the smarter of the two, which is why I hope she figures out that they can’t trust Elsa as far as they can throw her. By telling Elsa about her desires to see the doctor, Dot may have just inadvertently sent them right back into the hands of Stanley.

I was relieved to see that Paul survived his wounds from the last episode, but it was his girlfriend who had a rough go of it. There are a number of people fighting it out for Worst Parent of the Year on this show and Penny’s dad may have just edged himself up into first place with what he did to her. I’ve heard of being disappointed in your children’s choices, but he took it to the extreme. Let’s just say I’m hoping Dandy’s list includes him as well.

Speaking of Dandy, we didn’t see a lot of him in this episode but I’m sure he’s going to cause some trouble now that the love of his life is gone. The look on his face when the twins walked out was probably the scariest thing I saw in the entire episode.

Gloria: “Why would we harm a hair on their heads? We paid good money for these girls.”

Jimmy’s snide remark about Dandy “never” cutting a girl in half.

Dot discovering that Dandy had read her diary.

Bette actually choosing her sister over Dandy. I can’t say I saw that coming.

Dandy’s face after the girls left. Oh yeah, this isn’t going to end badly at all. Excuse me while I hide under my couch.

Wondering what Dot was up to when she changed her story.

Jimmy telling the story of getting a rabbit for a coat for Ma Petite. That was so sweet.

Dell finally admitting to Jimmy that he was his father and taking him home.

Jimmy and Dell staggering into the camp caterwauling their little hearts out.

Dot pointing out that she was happy to still be the caterpillar.

No! No! No! Why does everyone keep going after Ma Petite?

What did you think of this episode of American Horror Story: Freak Show? Were you surprised by Dell’s actions?