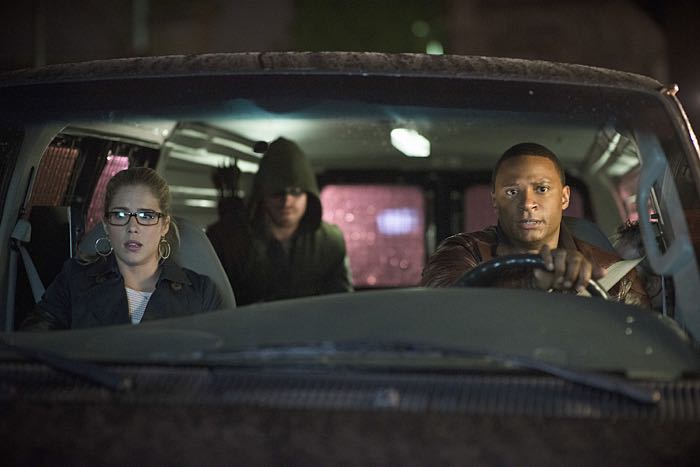 It must be Valentine’s Day on the CW’s ARROW because Cupid, a.k.a. Carrie Cutter (Amy Gumenick, TURN: Washington’s Spies), has arrived in Starling City and has her eye on a certain hero. Friends may tell Oliver (Stephen Amell) to “Draw Back Your Bow,” though, because this Cupid cutie is more than a little nutso, as her real name also indicates, and she embarks on a killing spree to get his attention. Not exactly a match made in heaven.

Gumenick is deliciously delightful as Cupid. Her character is off her rocker and a danger to society, but the actress still brings a fun charm to the role that demands people sit up and watch her. Carrie will never be part of Team Arrow nor a serious love interest, but she makes such an impression here that I hope she becomes a recurring player, popping up periodically to cause further turmoil.

Oliver isn’t having none of it, though he could be forgiven for being tempted, because his heart belongs to another. I’m not sure I understood just how deeply Oliver’s feelings for Felicity (Emily Bett Rickards) went until I watched “Draw Back Your Bow.” He’s so bad at expressing himself that it’s hard to tell what he’s thinking. However, his complete lack of any interest at all in Cupid’s flirtations, and she is very attractive on the surface, likely indicates his heart is spoken for and can’t be swayed.

Felicity may not be in the same boat, though. Ray (Brandon Routh) buys her a very expensive dress, loans her a necklace worth millions, and, most importantly, pays attention to her and praises her. Plus, his body is every bit as good at Oliver’s, and as Felicity say while drooling over a shirtless Ray working out, she definitely has a type. Though their dinner date with clients is labeled “purely platonic,” there is no mistaking that Felicity, at least, is interested in taking things a little further by evening’s end.

Ray is the one that stops sex from happening, but why? I can’t believe he’s not interested in the beautiful Ms. Smoak. His every action and word speaks to the contrary. Could it be that whatever secret plans he’s been cooking up for the city prevent him from getting involved with anyone right now? Is he that altruistic? He can’t possibly be the opposite (evil), or why knowingly keep Felicity close? He’s a bit confusing in “Draw Back Your Bow.”

Weirdly, Diggle (David Ramsey) is the one who tries to play matchmaker, encouraging both Oliver and Felicity to admit their feelings to one another. This isn’t something he’s done a lot of in the past, and suddenly having not one, but two scenes in which he does so seems off. However, he’s also recently had a baby, so he’s probably more emotional than usual, which could explain the behavior. After all, that warm happiness is surely what sparks him to invite Oliver and Roy (Colton Haynes) over for a family dinner, a very sweet moment in the hour.

There’s also flashback, of course, in which Oliver and Tatsu (Rila Fukushima) work together to find a missing Maseo (Karl Yune). I assume the connection ARROW makes between this flashback and the present story is that both circle around love, but that’s a weak thread and there are no other obvious connections. The fact that ARROW has to make such tenuous ties these days is probably a sign that, as I’ve long been saying, these past scenes are unnecessary. Any time they occur, I’m itching to get back to the main plot the entire time.

ARROW is a CW show, and follows some of the elements of such. Programs on this network often have eye candy, and “Draw Back Your Bow” delivers plenty of that for both sexes to enjoy, no gender bias present. They also tend to be a little more melodramatic than typical scripted dramas, and ARROW falls into this a bit, too. But it’s hard to argue that the show isn’t enjoyable, and the plot is usually engaging enough to get past those features, as it is in “Draw Back Your Bow” and most ARROW installments. That’s why I like it.