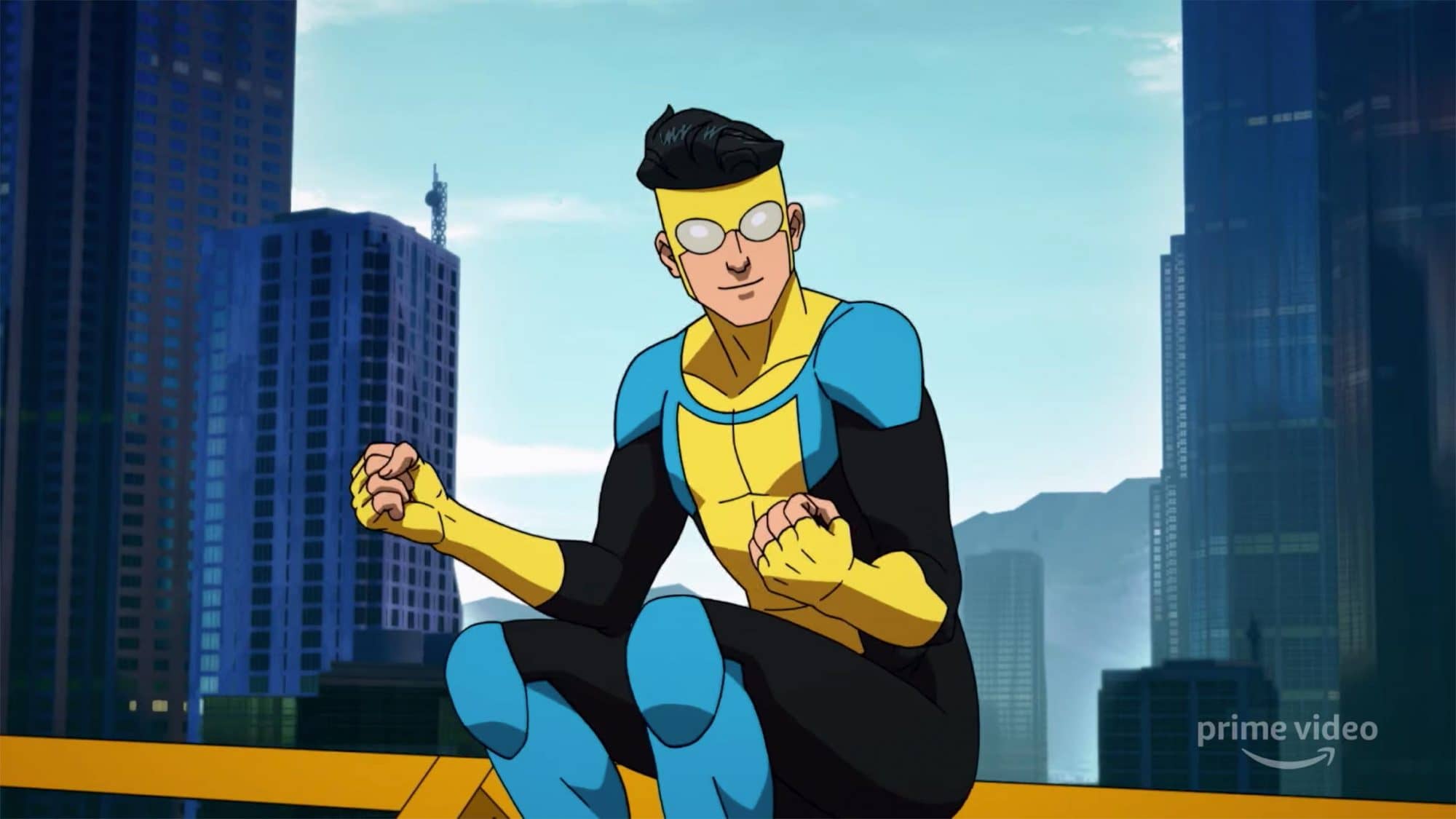 Amazon Prime has a new hour-long animated series coming next week called INVINCIBLE. Based on the comics of the same name by Robert Kirkman, the story follows a teen boy who begins to exhibit superpowers like his dad. This in a world filled with supers, both heroes and villains, with teams of powered people everywhere you look. But this particular boy is soon drawn into drama between several of them, and some dark secrets make things messy, indeed.

In preparing for this review, I not only watched the three episodes Amazon made available, but also read the first dozen or so issues of the comic. INVINCIBLE is a compelling tale that starts out looking like one thing but then becomes something almost completely different, yet at the same time holding onto a steady core. There are differences in the adaptation from page to screen, with some characters changing ethnicity and gender, and events are rearranged. Also, the comic seems to have more roles that are direct copies or parodies of existing properties from other publishers. But the changes seem to be good ones, mostly made to deepen the story and fit the episodic format length. If you were already a fan of the book, I suspect you’ll like this adaptation.

I can’t think of another hour-long animated show. The episodes, without commercials, come in at forty-some minutes, about as long as a broadcast drama, and double the length of most cartoons. The material in INVINCIBLE justifies it, though. Like Robert Kirkman’s other famous property, The Walking Dead, the story is complex and disturbing, at times graphically violent (as teased in the trailer). Yet, INVINCIBLE also has a cheery optimism because of its lead, Mark Grayson (Steven Yeun, The Walking Dead), that keeps things entertaining.

The world of superpowers has been done to death, and yet INVINCIBLE feels fresh. Partly because it leans on the tropes and familiar archetypes you already know and subverts them. Partly because it sometimes feels like its making fun of the genre it portrays, even while the characters feel grounded. This is a new take, and one worth watching.

As far as the story goes, I can’t say much. There are locks on spoilers, and I wouldn’t want to give anything away if I could because the shocks hit hard and fast. What I can say is this. The pilot starts out looking very much like a late 80s / early 90s cartoon of my youth, and that style never changes, lending an immediate comfort. But by the end of the first hour, this is disrupted, and each subsequent installment only continues the transformation. It is an artistically interesting production with an intriguing mystery and plenty of emotional-moving scenes. I both laughed and cried already. I definitely recommend it.

INVINCIBLE drops its first three episodes on Friday, March 26th, with weekly episodes streaming after that, only on Amazon Prime.