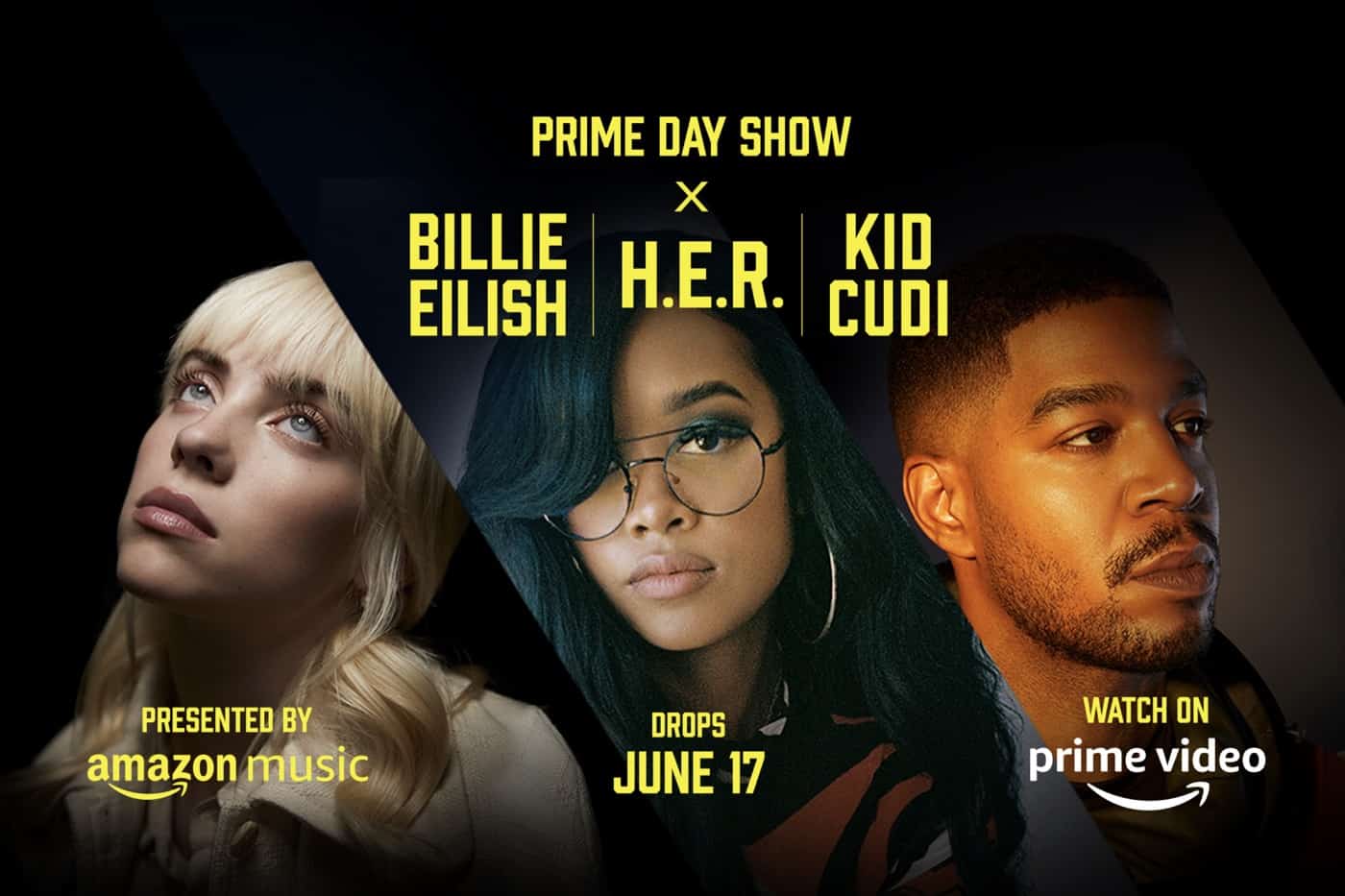 Today, Amazon announced that multi-award-winning and groundbreaking artists Billie Eilish, H.E.R., and Kid Cudi will star in the Prime Day Show, a three-part immersive musical event presented by Amazon Music that features some of the best in music and entertainment in celebration of Prime Day. All three episodes of the Prime Day Show will premiere globally starting June 17 on Prime Video and will be available to all customers for 30 days, with or without a Prime membership.

“Working with Billie Eilish, H.E.R., and Kid Cudi to bring their music to life through these imaginative experiences has been incredible,” said Ryan Redington, VP of Music Industry at Amazon Music. “Watching these globally renowned artists create three shows from the depths of their imagination has been unlike anything we’ve ever done before. We’re thrilled to bring fans along with us to celebrate these three remarkable artists and Prime Day.”

“These iconic artists have not only broken new ground in music but are inspired storytellers, culture creators, and visionaries,” said Jennifer Salke, Head of Amazon Studios. “We’re thrilled to partner with Billie, H.E.R., and Cudi to bring these authentic and deeply personal specials to fans around the world as we celebrate Prime Day.”

Prime Day Show viewers will be treated to three unique experiences that fuse performance and storytelling, transporting fans to worlds inspired by Paris, The Dunbar Hotel, and outer space.

PRIME DAY SHOW x BILLIE EILISH
Billie brings a timeless, Parisian neighborhood to life with a series of cinematic performances. Set in the city known as the birthplace of cinema, it was directed by Billie Eilish and Sam Wrench, and features new music from Billie’s upcoming album, Happier Than Ever. This breathtaking musical tribute was inspired by Billie’s long-time admiration of a long gone era.

PRIME DAY SHOW x H.E.R.
Once known as the hub of Los Angeles Black culture in the 1930’s and 40’s, the iconic Dunbar Hotel hosted some of the most prominent figures of its time, including musicians Duke Ellington, Lena Horne, Billie Holiday, and many more. In a modern day musical tribute to this legendary and important piece of history and culture, H.E.R. imagines what The Dunbar Hotel would be like if it existed in 2021 featuring new music from her album, Back Of My Mind.

PRIME DAY SHOW x KID CUDI
As he embarks on his biggest mission to date, Kid Cudi departs Earth to establish a new community on the moon in this intercosmic performance. Featuring music from his album Man on the Moon III, Cudi collaborates with the International Space Orchestra, the world’s first orchestra composed of space scientists from NASA Ames Research Center, the SETI Institute, and the International Space University as his backing band, in a musical collision defying sight, sound, and space.

To celebrate her unique performance, Billie Eilish is launching a line of merchandise that will drop exclusively on Amazon on June 17 alongside the Prime Day Show. Fans will be able to shop a collection of T-shirts, sweatshirts, posters, accessories, and more on Amazon.com/BillieEilish and in the Amazon Music app.

Celebrate Prime Day
Amazon’s annual Prime Day event will be held June 21 and June 22, kicking off summer with two days of incredible deals and the best savings Prime has to offer. The epic shopping will deliver Prime members over 2 million deals across every category, including the best in entertainment–Prime members who haven’t yet tried Amazon Music Unlimited can get our best deal ever with four months free with unlimited access to more than 70 million songs ad-free and millions of podcast episodes. In addition, with the purchase of select Amazon Echo devices, Prime members new to Amazon Music Unlimited can get six months free. Prime members will also again be able to support small businesses this Prime Day, with more than a million deals from small and medium-sized businesses. Members can shop across local Black-owned, woman-owned, military family-owned, and many more small businesses. Anyone can join Prime or start a 30-day free trial at amazon.com/primeday to participate in Prime Day.

About Billie Eilish
As seven-time Grammy Award-winning Billie Eilish prepares for the July 30 release of her album, Happier Than Ever, the 19-year-old Los Angeles native remains one of the biggest stars to emerge in the 21st century. Billie Eilish made history in 2020 as the youngest artist to receive nominations and win in all the major categories at the 62nd Grammy Awards, receiving awards for Best New Artist, Album of the Year, Record of the Year, Song of the Year, and Best Pop Vocal Album. Billie Eilish is also the youngest artist to write and record an official James Bond theme song, “No Time To Die.” Most recently, she took home both Record of the Year for everything i wanted and Best Song Written for Visual Media for “No Time To Die” at the 63rd Grammy Awards.

About H.E.R.
In just under five years, H.E.R. has proven herself as a versatile R&B force to be reckoned with, earning 13 Grammy nominations and four wins, including Song of the Year for “I Can’t Breathe,” plus an Academy Award for Best Original Song with “Fight For You.” To date, H.E.R. has accrued nearly 6 billion combined audio and streams worldwide—and counting. H.E.R. keeps the momentum going with her latest single, “Come Through,” from her upcoming album, Back Of My Mind, slated for release this summer.

About Kid Cudi
Over the course of his musical career, actor, Grammy Award-winning musician, and multi-platinum recording artist Kid Cudi has released seven studio albums and has sold a combined 22 million records. His first studio album Man on the Moon: The End of Day received widespread industry praise and generated a massive cult following for his music. His most recent album, Man on the Moon III: The Chosen, was the third installment of his trilogy of albums and released in December 2020. Cudi has made exceptional contributions to the music industry and many prominent artists claim his discography as a significant source of stylistic inspiration.

To stream the Prime Day Show on Prime Video, customers do not need a Prime membership, just an Amazon account—which is free and can easily be set up on Amazon. The Prime Day Show will also be available to stream on Twitch and IMDb TV.

Every Day Made Better with Prime
Prime offers the best of shopping and entertainment to more than 200 million paid members around the world. In the U.S. that includes unlimited access to award-winning movies and TV episodes with Prime Video, ad-free listening of 2 million songs plus thousands of stations and playlists with Amazon Music, free games with Prime Gaming, more than 1,000 books and magazines with Prime Reading, unlimited photo storage with Amazon Photos, and incredible savings with Prime Day. Prime was built on the foundation of unlimited fast, free shipping. Prime members enjoy ultrafast grocery delivery and pickup from Amazon Fresh and Whole Foods Market in more than 5,000 cities and towns, free Same-Day Delivery on millions of items in 47 major metropolitan areas, and free One-Day Delivery on more than 10 million items coast to coast, Prime members also receive free two-day delivery on prescriptions from Amazon Pharmacy and prescription savings at more than 60,000 participating pharmacies in the U.S. To join Prime or start a free trial, visit amazon.com/prime.

Prime Video is just one of many shopping and entertainment benefits included with a Prime membership, along with fast, free shipping on millions of Prime-eligible items at Amazon.com, unlimited photo storage, exclusive deals and discounts, and access to ad-free music and Kindle eBooks. To sign up or start a 30-day free trial of Prime, visit: amazon.com/prime.

About Amazon Music
Amazon Music reimagines music listening by enabling customers to unlock millions of songs and thousands of curated playlists and stations with their voice. Amazon Music provides unlimited access to new releases and classic hits across iOS and Android mobile devices, PC, Mac, Echo, and Alexa-enabled devices including Fire TV and more. With Amazon Music, Prime members have access to ad-free listening of 2 million songs at no additional cost to their membership. Listeners can also enjoy the premium subscription service, Amazon Music Unlimited, which provides access to more than 70 million songs and the latest new releases. And with Amazon Music HD, customers have access to the highest-quality listening experience available, with more than 70 million songs available in High Definition (HD), over 7 million songs in Ultra HD, and a growing catalog of 3D Audio. Customers also have free access to an ad-supported selection of top playlists and stations on Amazon Music. All Amazon Music tiers now offer a wide selection of podcasts at no additional cost, and live streaming in partnership with Twitch. Engaging with music and culture has never been more natural, simple, and fun. For more information, visit amazonmusic.com or download the Amazon Music app.