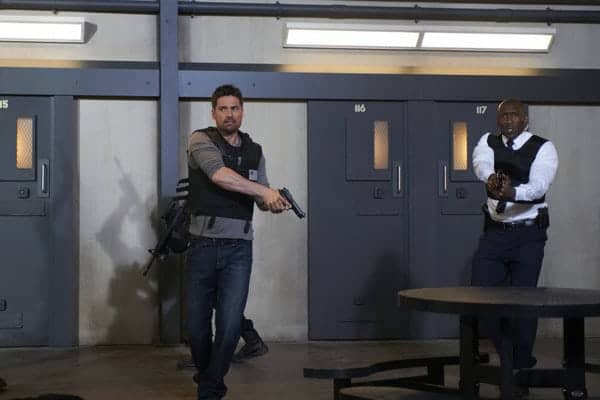 ALPHAS returns to SyFy for a second season with “Wake Up Call,” which opens eight months after the events of the season one finale. Dr. Rosen (David Strathairn) remains locked up in an institution, making friends with his captors, while the rest of the team has scattered. But soon, as Dr. Rosen predicts will happen, an emergency forces the government to call him out of lock up and reassemble his group to fight the good fight.

Dr. Rosen is an absolutely fantastic character. The way he has such knowledge about how the world works, and his utmost confidence in that knowledge, is impressive. Even when things are not looking good for him, he has a calm, knowing that things are always changing, and they will again soon. His morality may sway a little, but he always manages to right his course and fight for justice. It’s almost like an Alpha power, and makes him a very worthy leader for the group.

Outing the Alpha phenomenon to the public is a huge gamble. Rosen knows it is the right thing to do, but he pays a price for doing so. While Rosen does get his team back, with assurances that he will have even more control over their missions and their outcomes, that isn’t an all clear to preach to a mass audience. Perhaps he thinks he won’t need to if he maintains control. Surely he has learned his lesson about lack of oversight not being a good thing, under any circumstances.

One wonders, if ALPHAS did not take place in the television world, if Dr. Rosen would have been released quite so quickly. It might have been neat to explore the team leaderless a little longer, as well as the affects of an extended captivity on Rosen. Sadly, in a television show like this, a status quo must be maintained for the procedural elements to work. The end of “Wake Up Call” doesn’t ignore what has come before it, but by fixing the major elements, it sets itself up for a bunch of stand alone stories.

There is nothing inherently wrong with a procedural. However, ALPHAS has so much potential to move beyond that. And it is doing so, sort of. Season two will be about catching all of the bad guys that Stanton Parish (John Pyper-Ferguson, Brothers &amp; Sisters, Caprica) has let out, as well as stopping a war between humans and Alphas. But there will definitely be cases of the weeks along the way, and entire hours that are mostly spent chasing a single suspect. These are the stories that aren’t quite as compelling as the ones that cater more to the larger arcs.

It’s very interesting to see how the rest of the team has moved on before Rosen brings them back together, and like in Rosen’s case, I wish they had spent a bit more time exploring those experiences. Each goes down their own path, some back to what they were before, and others making different choices.

Bill (Mailk Yoba) has assumed de facto leadership, continuing to work with Clay (Mahershala Ali), though his decisions splinter the group. Only Hicks (Warren Christie) and Gary (Ryan Cartwright) continue to work with him, having no where else to go, and dreading a return to life with no purpose. And it isn’t long before Bill’s weak leadership gets Gary taken away by the NSA, and later locked up in prison. Bill may try, but he just doesn’t have that unique personality that Rosen has to keep these individuals together.

Nina (Laura Mennell) and Rachel (Anita Ghanizada) backslide, with Rachel hiding out in her parents’ house, and Nina going back to manipulating people to get what she wants. This does expose weaknesses within them, neither enjoying these lives, but not having the strength to change them without Rosen’s help, either. Not that the others aren’t weak, too, because they are, in different ways. And it’s not a sexist choice that sidelines the girls, but rather, the plot that best serves each layered, complex part in the way that it has been written up until now.

ALPHAS isn’t perfect, and “Wake Up Call” does disappoint a bit in the quick resolutions and easy answers. However, it is still a highly entertaining show, fully realizing a particular world, and exploring it in interesting ways. If the preview can be believed, it also looks like season two is going to be pretty darn good. Watch ALPHAS Mondays at 10 p.m. ET on SyFy.