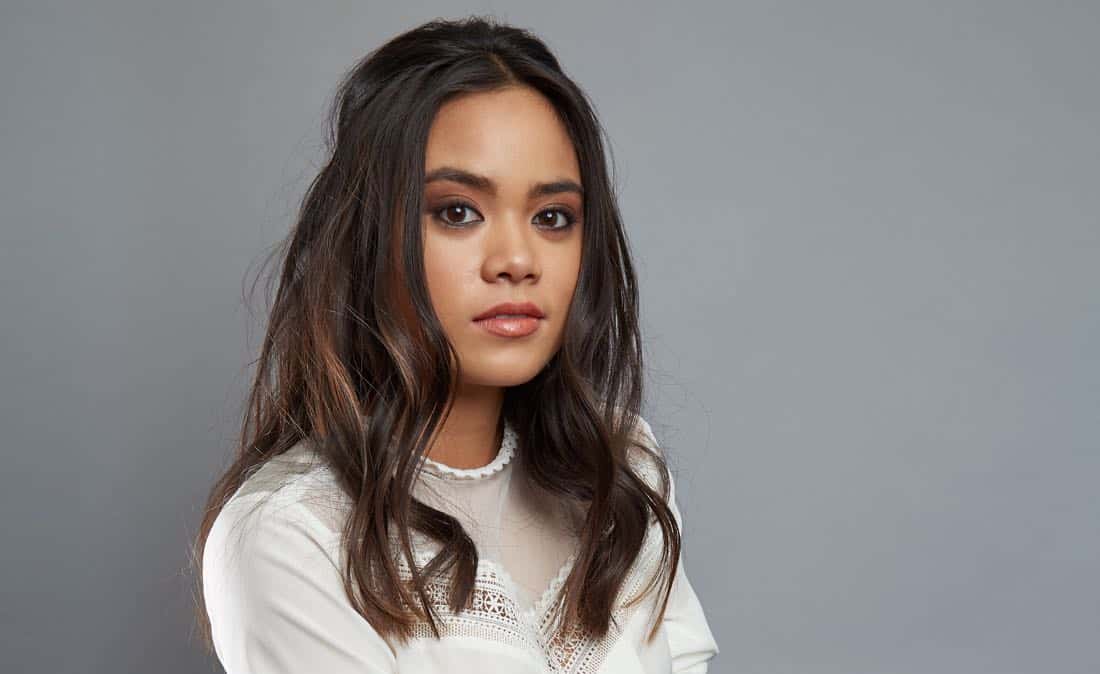 Scoring a dream job and a dream role is every actor’s desire, but very few get a two-in-one “dream come true.” For Sari Arambulo, her role on NBC’s comedy series A.P. BIO has been just that and she is happily savoring the chance to portray a character in this year’s hottest new comedy series. In an exclusive interview, Sari shares insight into her character Grace in A.P. BIO and some of the key lessons she has picked up as a working actor and comedian in Hollywood.

What was the initial appeal for you about portraying Grace and working on NBC’s A.P. BIO?
SARI: The writing of the show was hilarious, with amazing producers backing it. I love acting in comedies and the tone of the humor really spoke to me!

How would you describe who Grace is?
SARI: Grace is a cute, sweet, kind high schooler in Jack Griffin’s A.P. Biology class. She’s just happy to be with her friends and always gets caught up in their antics. She is very book smart, but her street smarts could definitely use some work.

What do you most admire most about her?
SARI: I admire her ability to just go with the flow, and her willingness to help others.

What was it like working alongside the talented ensemble on A.P. BIO?
SARI: Incredible! We all got along so well, and it was a blast getting to know one another. Some of the cast’s improv, like Patton [Oswalt] and Paula’s [Pell], were so funny I couldn’t keep it together during filming! Table read days were always one of my favorites because we got to see the entire ensemble and catch up. I also loved seeing the script come to life!

What has surprised you about working on A.P. BIO?
SARI: What has surprised me… I had watched some episodes of “It’s Always Sunny in Philadelphia,” so working with Glenn Howerton was really fun but also, I never realized how dedicated his fans are to him until A.P. BIO! Which is great because if they love Dennis they’ll definitely love his character on this show.

What are you most proud of about working on A.P. BIO?
SARI: I’m most proud of working on such a funny show with amazing producers, incredible writers and a talented cast that genuinely all got along. I feel very blessed!

Then as an actor, what has been the one thing you have taken away from the experience of working on A.P. BIO?
SARI: Just learning to make strong choices. What was great about A.P. BIO was that Mike and the various directors and producers would let us ad-lib and kind of add layers to our character. I grew a lot as an actor because of this.

You had a guest appearance in the MTV series SWEET VICIOUS What did you enjoy and appreciate about that experience?
SARI: Yes! I loved working with the cast and crew on that show. It was amazing being a part of a show that dealt with such hard-hitting issues, but in a fun and clever way. When I was on the show, it was their first episode to film after they had gotten picked up — so I was thrilled to be there during such an exciting time.

What has surprised you most about your career so far?
SARI: The thing that has surprised me the most is the camaraderie among my peers. You go up against other actors for roles, but I’ve actually gained so many friends just from auditioning together! I’ve been in network tests where everyone is rooting for each other and it’s just so great to see.

At this stage of your career, what do you think you have learned from the roles and projects you have worked on?
SARI: I have learned about the importance of being professional on set at all times. It is important to arrive prepared with your lines.

Then what are the perks of where you are in your career right now?
SARI: In terms of perks, I would say it’s the invaluable opportunity to meet and work with respected actors, directors and producers in the entertainment industry.

If there were one previous role you would like to revisit, which would it be and why?
SARI: I would really like to revisit the role I played in TNT’s PERCEPTION, where I played a credit card theft operator that was interrogated by the police. As someone who typically does comedy, it was a blast for me to play a badass role in a drama.

Do any of your characters and the situations they find themselves in ever leave a lasting impression on you?
SARI: Yes! Sometimes I’ll be in conversation with friends or family and catch myself saying a couple of words or phrases that my character said. It’s really interesting how “life imitates art” or, is it the other way around?

Do you find any of your character’s habits manifesting in your own life? Like what?
SARI: For Grace, she’s sweet, kind, and naive and I wanted those personality traits to manifest in her body language. So as Grace, I had this certain way of sitting in my desk. After we wrapped, I still sometimes find myself sitting that way!

Has there been any great advice you have gotten about working as an actor?
SARI: Yes! Some great advice I received would be that, in an audition: all you can do as an actor is bring yourself and offer the casting director your version of the role. It’s not about worrying if the casting thinks you’re right for the part, it’s more about bringing your own take and nuances to the character — and see if that resonates with the executives. Casting to an extent doesn’t really know what they’re looking for until you bring it in the room! This advice really changed my outlook on auditioning and allows me to feel more free and confident when in the casting room.

What advice would you offer to other upcoming and aspiring actors?
SARI: I would say, to continue working hard on your craft and to not become discouraged. I would advise them to get involved in a great acting class. At the same time, I think it is important to pursue other passions and do well in school, it all goes hand in hand. Work hard to become the best you can be, so that when the right opportunity arises, you’re ready!

At a time when women’s voices are rising to be heard and respected around the country and world, what do you recommend your fans do to lend support in that endeavor?
SARI: Watch as much film and TV as you can with women leads. Read articles written by women. Follow feminists on social media. Continue the conversation — questioning the current climate in the entertainment industry as well as in the workplace in general, and when given the opportunity stand in solidarity with women!

Do you have any other upcoming projects that you can share that fans should keep an eye out for?
SARI: I’m currently working on producing / writing my own short film!

To see Sari continue to bring her subtle brand of charming humor to A.P. BIO, be sure to tune in for all new episodes on Thursday at 8:30 p.m. on NBC. For fun clips and information about the show, you can follow the show on Twitter @NBCAPBio. Then to follow what Sari is up to as her career grows, be sure to follow her on Twitter @SariArambulo.