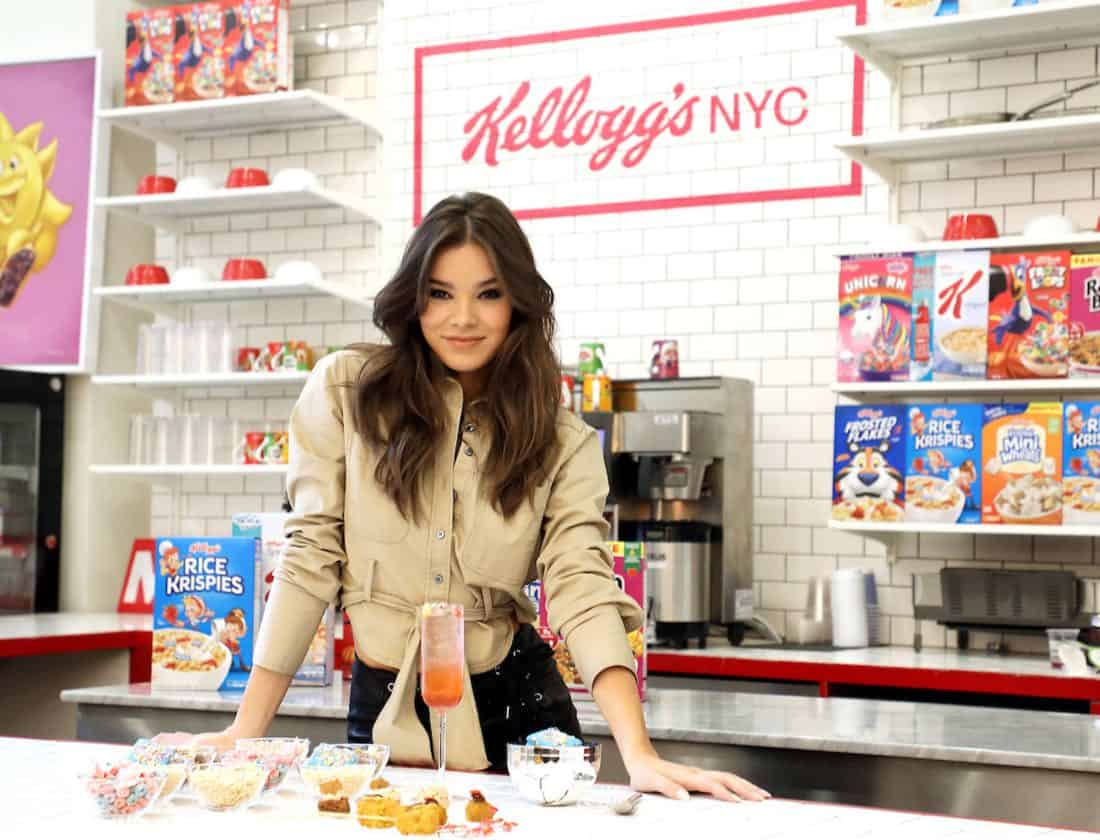 During the event, partygoers were able to feast on exciting cereal-themed creations – including cereal bites, cocktails and a liquid nitrogen cereal bar – for more than three hours before dancing the night away to a performance by Hailee Steinfeld and a cereal-themed New Year’s-style countdown at midnight.

To celebrate the occasion, Kellogg’s NYC Café – the largest cereal café in the country – was transformed overnight into National Cereal Day headquarters. The party included mixes by DJ Flipside, larger-than-life cereal boxes suspended from the ceiling, a photo booth with cereal-themed party favors, colorful confetti and a giant disco “bowl” which lit up at the stroke of midnight.

“It’s about time cereal had its own holiday!” said Hailee Steinfeld. “I had no idea there were so many ways to play with and imagine cereal differently, these special Kellogg’s DIY recipes are delicious! I love a good classic bowl with milk, but now I have some fun ideas to spice up my cereal routine!”

The event kicked off a two-day celebration that continues today.

“Kellogg’s NYC Café continues to spark creativity by encouraging people to reimagine what a bowl of cereal can be — and even the bowl is optional,” said Aleta Chase, Kellogg’s Marketing Director. “It made sense to celebrate this modern, inventive approach to how we think of food on National Cereal Day.”

Those who can’t make it to Kellogg’s NYC Café to celebrate National Cereal Day can jump in on the fun at home by re-creating some of the featured recipes (available at www.kelloggsnyc.com) or by sharing some of their own combinations on social media using #NationalCerealDay! Menu items include:

To try some of the new recipes and for some DIY fun, cereal lovers can head to Kellogg’s NYC Café today, Wednesday, March 7, from 8:00 a.m. to 6:00 p.m. The first 1,000 attendees who purchase a bowl will receive a free box of cereal.

At Kellogg Company (NYSE: K), we strive to make foods people love. This includes our beloved brands – Kellogg’s®, Keebler®, Special K®, Pringles®, Kellogg’s Frosted Flakes®, Pop-Tarts®, Kellogg’s Corn Flakes®, Rice Krispies®, Cheez-It®, Eggo®, Mini-Wheats® and more – that nourish families so they can flourish and thrive. With 2016 sales of $13 billion and more than 1,600 foods, Kellogg is the world’s leading cereal company; second largest producer of crackers and savory snacks; and a leading North American frozen foods company. And we’re a company with a heart and soul, committing to help create 3 billion Better Days by 2025 through our Breakfasts for Better Days global purpose platform. To learn more, visit www.KelloggCompany.com or www.OpenforBreakfast.com and follow us on Twitter @KelloggCompany, YouTube and on our Social K corporate blog.

Steinfeld recently released a new song, “Capital Letters,” which is featured on the Fifty Shades Freed Original Soundtrack. Up next, she joins Kelly Clarkson as a guest advisor on NBC’s The Voice and will hit the road with Charlie Puth on The Voicenotes Tour this Summer.

In addition to her thriving music career, Steinfeld is an Academy Award-nominated and critically acclaimed leading actress.