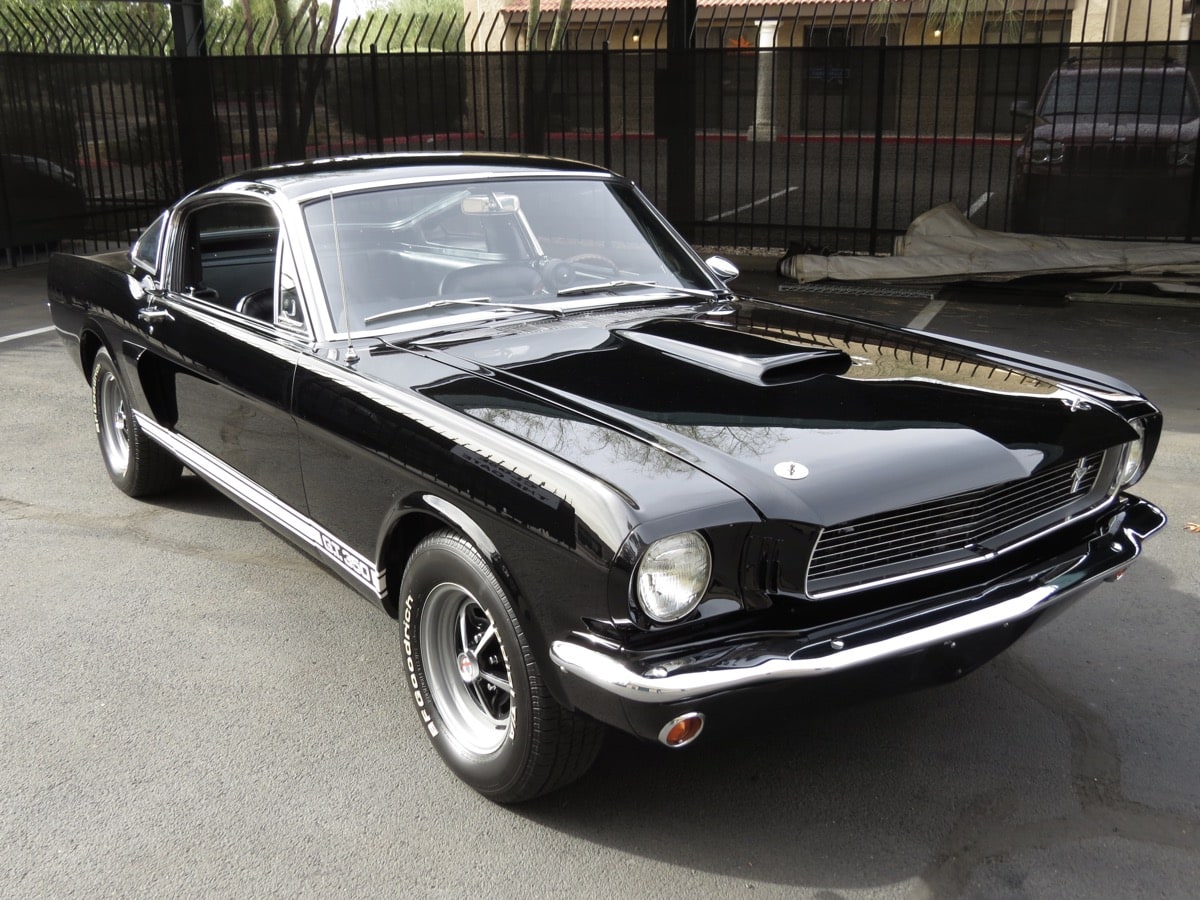 The American classic muscle car had a somewhat humble beginning in 1964. The very first Ford Mustang gave rise to dozens of types and models of the American sports car, but none were truly as instrumental as the Shelby Mustang. This particular model of Mustang debuted in 1965 and took the traditional Mustang to the next level. Now faster than before, the Shelby Mustang was practically made for the professional racing track. Today, there are several different versions of this particular Mustang, but the overall design and performance have very much become a part of what it means to own a Ford Mustang. Of course, to get a better understanding of the Shelby GT350, you first have to understand the man behind the machine itself – Carroll Shelby.

A Texas-native, Carroll Shelby was a flight instructor in World War II before he started racing cars. Before the birth of the Ford Mustang, Shelby drove a Ford V8 hot rod competitively for a few years before being invited to race Aston Martins in the E.U. Shelby had many crowing achievements during his active racing years, including breaking speed records, gracing the cover of Sports Illustrated multiple times, and winning the 24 Hours of Le Mans in 1959. It wasn’t until the early 1960’s that Shelby began making waves off the track. Unfortunately, due to health complications, Shelby had to focus on other areas or aspects of the automotive world besides racing. Thankfully, Shelby didn’t have to sit idling for too long. In fact, he was heavily involved with the design and creation of the Supersnake Cobra—though it was for his own personal use. Nevertheless, somewhere between 1962 and 1965, Shelby was enlisted by Ford himself to develop a top-notch race program/campaign for the Ford Mustang as a potential Sports Car Club of American (SCCA) racer and, in essence, turn the newly created Mustang into the ideal American race car. In Shelby’s eyes, he was tasked with “making a racehorse out of a mule.” However, to no one’s surprise, that’s exactly what Shelby did with the 1965 Shelby GT350.

Often referred to as the first “pony car,” the 1965 Shelby Mustang was a true sports car with ample horsepower (306 hp). Using the blueprints of his proven Cobra approach, Shelby provided the SCCA with 100+ examples of the GT350. In August 1964, Ford and Shelby finally moved forward with two distinct models—the GT350 and the GT350R. Though these two models were a true innovative feat, the only real difference between them was that the GT350 had a street-legal bumper and valance. The GT350 also lacks a roll bar. The other model, the GT350R, meets race specifications, 360 horsepower, and only a total of 35 vehicles were manufactured. Though both these Mustangs were masterfully made and affordable (they originally sold for $4,547), there were still some improvements to be made; hence, the creation of the 1966 Shelby Mustang GT350 and the GT350H. Note that the 1965 Shelby Mustang is indeed a collector’s item and has sold for more than ten times their original listed price, making them one of the most expensive models of Mustangs in existence.

The 1966 GT350 is arguably a fan favorite, as it’s still very much a race car. However, it has more street-friendly features. For instance, this was the first model with added backseat with easy trunk access, an extended noise-reducing exhaust pipe, more colors, and an optional automatic transmission. Other notable changes include different exterior features, different rear windows, and brake scoops. That said, the 1966 Shelby GT350 also dropped Mustang from its nameplate. However, the K-code 289 engine stayed right where it belonged under the hood of this street-legal racing car.

For many Mustang enthusiasts, this was the beginning of something special. As a result, the 1966 GT350 is in high demand and even harder to find. The good news is, for anyone that ever dreamed of owning this original street-legal race car, you don’t have to search the world twice over and cough up millions of dollars. Instead, you can have one built for you for less than $300,000. If this sounds like a dream come true, then why not make it a reality by ordering your very own, customized 1966 Shelby GT350? Simply go to https://revologycars.com/car/1966-shelby-gt350/ for more details.

In addition to the 1966 GT350, Ford and Shelby also offered the GT350H. This practically identical vehicle was a unique variation, to say the least. Here, the H stood for the well-known car rental company, Hertz. Ford, Shelby, and Hertz teamed up to create the “Rent-a-Racer,” which was comprised of 1,001 Shelby GT350 Mustangs—85 were manuals and the remaining cars were automatics. Though the GT350H was considered a different model, the only notable difference between these two vehicles was, for the most part, the paint job. The majority of Hertz’s racers, if not all, were black with gold-colored stripes, which made them clearly identifiable as Hertz racers (this company’s logo uses similar colors to this day). Though Shelby’s Rent-a-Racers were short-lived, these Mustangs still had a shelf life. Consequently, most of the cars were resold to consumers, after the buzz died down. It was even rumored that Shelby himself purchased, and later sold his automatic GT350H decades later.

Ford also produced a handful of 1966 GT350 Fastbacks. Of course, unless you’re a true car connoisseur, you may not know the difference between the standard 1996 Coupe and the Fastback. Often, when people envision a 1966 GT350, it’s the coupe-style Mustang that comes to mind. Well, there’s a reason for that—the coupe-style Mustangs were simply more popular. Thus, due to their admiration, more 1966 Coupes were manufactured. Nevertheless, the Fastback was Ford’s attempt to improve upon the widely-successful GT350. However, they weren’t as widely received as the company had hoped. As a result, production of the GT350 Fastback slowed and eventually became a thing of the past. That said, there was a silver lining to this particular Shelby GT350 variation. It became a collectible vintage item that’s still highly sought-after.

Clearly, the winner here was the original 1966 GT350, as it was insanely popular when it first hit the scene, and it continues to be the bestselling Mustang of all time. Nonetheless, all model 1966 GTs were fairly similar. For instance, all 1966 models had your standard Mustang V-8, K-code engines, Holey 4-barrel carbs on the intake manifolds, and were customized with a handful of other Shelby’s signature upgrades. In comparison to its predecessors, the 1966 GT models had new trendy gas caps, standard driving headlights, functional side coops, plexiglass louvers, emblem changes and GT350 badging, plus racing stripes. Other significant features include a 4-speed manual transmission, a live rear axle with leaf springs, independent front suspension with coil springs, hydraulic disc brakes (front and drum rear), and a 108” wheelbase. One notable drawback of the 1966 GTs was that they were on the smaller side for some. Moreover, by today’s standards, the original GTs weren’t the safest, a tad noisy, and didn’t have modern features like defrost.

End of an Era

By 1967, the Shelby GT350 was overhauled in a sense. New race-inspired features were added. However, much of the focus that once shined so brightly on the GTs had been diverted to the 1967 Shelby GT500. Not only was Shelby himself quoted saying the GT500 was the first car he was truly proud of, but also, the general public fell in love with the 427/428 CID engine that was superior to the GT350’s engine. Ultimately, by 1968, Ford tried to rebrand both the GT350 and GT500 by adding Cobra to their nameplates and making a few minor upgrades. But then, it’s safe to say that 1968 was the beginning of the end for the Shelby GT350 and its various editions. In fact, it wasn’t until 2011 that Ford once again tried its hand at the GT350. Of course, this was a redesigned commemorative version for the Shelby GT350’s 45th anniversary. Then again, yet another GT350 rendition made its debut in 2016. Now, almost five years later, it’s unclear how often an ode to the beloved 1966 GTs will happen moving forward, but it’s fair to say that Ford will continue to try and put a new spin on an old classic.

Ultimately, the 1966 Shelby GT350 truly changed the game when it came to the Ford Mustang, American race car, and street-legal sports car. From this single-vehicle alone, American auto design changed and continues to evolve to this very day. With that said, there’s no denying this particular make and model of Mustang is a true classic. Thus, if you’re interested in building your very own, purchasing a pre-owned model, or just learning more about this timeless Ford vehicle, there’s no right time like the present.