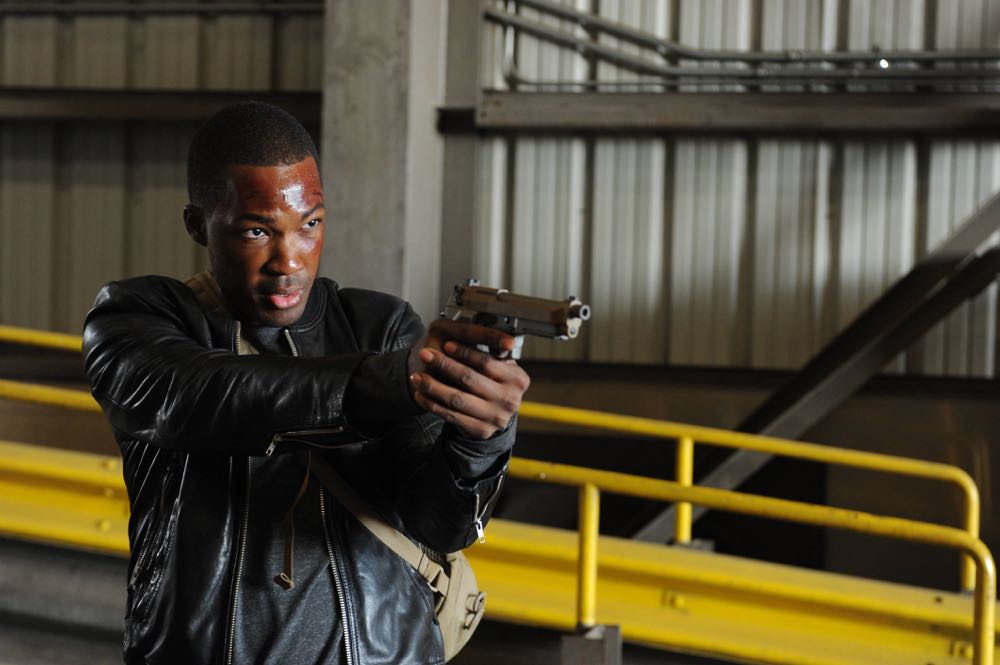 24 is back tonight! OK, so it’s not classic 24, as our hero, Jack Bauer, is nowhere in sight. But other than missing Jack, this version is pretty much the same thing. There are terrorists and sleeper cells, betrayals and moles, CTU agents and politicians, people who just won’t listen even though their deafness gets in the way of saving the day, and, of course, the ticking clock as events unfold in real time.

Our new protagonist is Eric Carter (Corey Hawkins, The Walking Dead, Straight Outta Compton), the leader of an elite CTU squad that took out a major terrorist six months ago (think SEAL Team Six and bin Laden). Back in the states, Eric is trying to move on with his wife, Nicole (Anna Diop, The Messengers). But he isn’t doing a good job of it, Nicole even hypothesizing that Eric misses the killing and the danger. Can he settle into suburbia?

24: LEGACY quickly proves he doesn’t have to. The son of the assassinated terrorist is in town with a squad, and begins picking off Eric’s team one by one. With only Eric and mentally unstable Ben Grimes (Charlie Hofheimer, Mad Men, Black Hawk Down) left, Eric has to go on the offensive, trying to stay alive and stop the son from recovering his dad’s sleeper cell list. This means Eric is like later-seasons Jack, already violent and willing to do what needs to be done, even if it’s against the law, so yeah, I’m sure he can do it.

Of course he can. That is never in doubt. This is 24, so the bad guys will get to kill some people along the way, but not as many as they’d like. In fact, the blood starts flowing (in a not-particularly-gory way) only moments into the first hour. There are always casualties in war, but 24, taking its queue from the superhero genre, always makes sure that our hero wins the day, albeit with some cost. 24: LEGACY looks to follow that same format.

Also, as in other seasons of 24, high-level politicians enter into the story. This time we have Rebecca Ingram (Miranda Otto, Homeland, The Lord of the Rings), the former head of CTU, whose husband, Senator John Donovan (Jimmy Smits, Sons of Anarchy, The West Wing), is running for president. This dynamic allows for the in-agency stuff to tie in to election drama in a satisfying way.

Having watched two hours so far, 24: LEGACY almost makes me forget about Jack Bauer. They wisely have brought in a heavy cast, which also includes Dan Bucatinsky (Scandal), Teddy Sears (The Flash), and Gerald McRaney (This Is Us), who along with those above, make the story gripping and well-acted enough that, even with the popcorn-style, unrealistic plot, it’s a lot of fun. So much going on with so many fine performers, and family drama tossed in, too, keeps us from dwelling on what we don’t get.

Which isn’t to say that 24: LEGACY isn’t without its ties to past seasons. One of the new CTU staff members is Mariana Stiles (Coral Pena), the cousin of Edgar Stiles, whom this new version reminds us was one of the best the organization had to offer. But it also stands enough on its own that new viewers could jump right in without missing a beat.

Like the last Jack-led season, 24: LEGACY will only present twelve of the twenty-four hours in this all-important day. This is a wise move, as most seasons of 24 suffered from dragging or vamping in the middle, and the twelve hour format (with hours skipped to still cover an entire day) is a tighter, more enjoyable one. 24 banks on intensity, and the shorter season makes it easier to keep up the adrenaline.

My overall impression of 24: LEGACY is that the franchise is resilient and will fare just fine without its lead. As much as I hope Jack does return for future installments, the rest of the 24 ensemble has always been rotating, and the format works as long as the cast stays strong, which it does here. 24 isn’t the best show on TV, not by a long-shot, but it’s action-packed entertainment that gets your blood pumping, and as a fan or the original, I’m not disappointed at all by the latest incarnation.

24: LEGACY premieres tonight after the Super Bowl, then moves to its regular timeslot tomorrow at 8/7c.