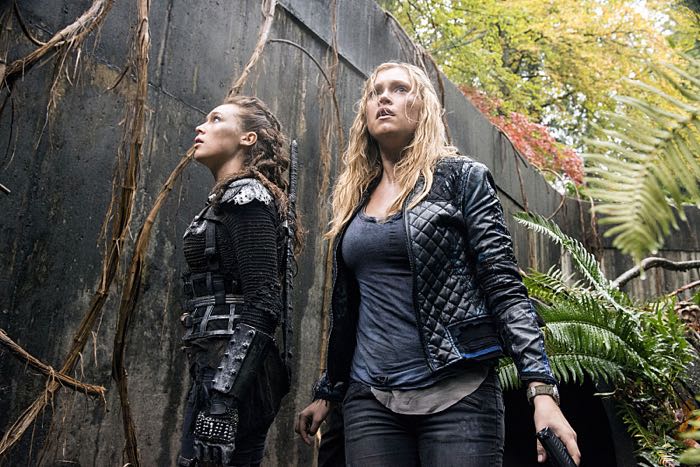 In the next episode of The 100, nearly everyone is set off on a new adventure. The good folks over at the CW aired the episode for the press and I’ve got some facts you need to know about the episode.

There’s no way I’m going to reveal exactly who or what this enemy is, the surprise is way too much fun. I will say that when this new threat appeared, it made me jump a few inches out of my chair and squeak like a mouse. It is also something that I don’t think anyone will be expecting.

One of the great things about this episode is the amount of unusual pairings. No, I’m not talking about romance, but we do get to see characters paired up and working together that normally don’t do so. One such pair is Bellamy and Lincoln and it was intriguing to see them work together for a common goal. Throughout their journey, we learn more about both of them. Just don’t expect things to go according to plan.

Another unique pairing in this episode is Jaha and Murphy. When Jaha asks Murphy to help him with one heartbreaking quest, the two of them end up doing some bonding that I never thought I’d see between these characters. When it’s over, Jaha drops another bomb that will leave Murphy with a pretty big choice to make.

Out of the Pan and Into the Fire

Poor Clarke just can’t catch a break in this episode. She’s working hard to keep the two groups united toward their common goal, but not everyone is on board with that idea. That situation leads to Clarke being in danger, which then leads to Clarke and Lexa in even more danger. Clarke and Lexa make for yet another great pairing in this episode and it was fun to see them take on an enemy together.

With so much good stuff happening in this episode, it’s hard to pick a favorite moment but if I had to, it would have to be what happens with Octavia. It’s not an easy episode for her, but she proves how much she has changed since arriving on the ground and when it’s all over, she’s given not just one, but two offers that will affect the rest of her life.

As usual, a lot happens in the final moments of this episode. It seems like every person has some sort of surprise to deliver, which will leave you waiting on pins and needles for the next episode. Which surprise is the biggest? Let’s just say you need to keep an eye out for what happens with Bellamy and Lincoln, as that was the one that shocked me the most.