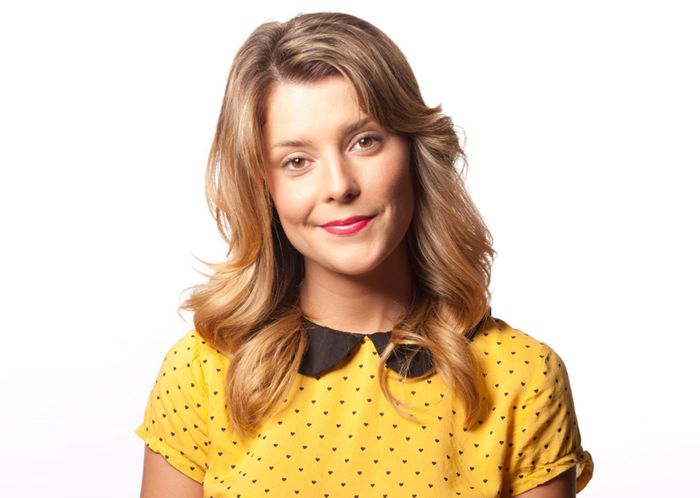 Internet sensation and comedian Grace Helbig is joining E! Entertainment with the greenlight of “The Grace Helbig Project” (working title), slated to premiere in primetime April 2015.  The new hybrid comedy talk show will showcase Helbig, best known for her “Its Grace” YouTube channel, which has more than two million subscribers, and feature her “uber fan” point of view on what’s trending in pop culture, as well as fun and unexpected interviews with celebrity guests.

“This show is a fresh take on the conventional talk show with a very unconventional host who has already captured an enormous fan base of young viewers on the web,” said Jeff Olde, Executive Vice President, Original Programming & Development, E! Entertainment. “As we continue to seek out programming that offers a rich multiplatform experience, we are excited to launch this forward-thinking talk show that speaks so perfectly to our audience and to the core of E!’s pop culture brand.”

A unique viewing experience, “The Grace Helbig Project” is a call to action for E!’s social media savvy audience and an extension of the unprecedented direct engagement Helbig has with her fans. As a host who values her audience as not just fans, but co-creators, every week she will invite viewers to interact with her on social media, using their Tweets, Vines and Instagrams to help shape the show.  Socially, E! reaches 48 million followers and @eonline ranks #1 in Klout (social influence) amongst entertainment news sites and cable networks (excluding news & sports).

Celebrity guests will be interviewed in an assortment of everyday locations, ranging from her car to the grocery store. With a comedic approach that is improvisational, each interview feels like a sneak peek into a private conversation where neither participant is taking themselves too seriously.  Whether it’s challenging a guest not to cry as they watch the most tear-worthy web videos in her viewers’ arsenal, comparing browser histories with a celeb, or posing the week’s ‘Impossible Question,’ Helbig’s comedic segments will bring out the silly and unpredictable side of her show’s wide array of guests.  The result is some serious fun and Helbig’s line of questioning is personal, quick-witted and heavily focused around what’s trending in social media.

Comedian, actress and video blogger, Helbig is the creator and star of the Webby award-winning “Its Grace.”  She is also the creator of the IAWTV and Streamy award-winning web series “DailyGrace,” as well as the podcast “Not Too Deep With Grace Helbig”, which consistently ranks #1 on Itunes.  Recently, Helbig starred in and executive produced the Itunes Top 10 feature film “Camp Takota” and the comedy travel series “HeyUSA” for Conde Nast.  Her live tour “#NoFilter” has been selling out domestically and internationally and her book “Grace’s Guide: The Art of Pretending to Be a Grown-up” earned her a NY Times #1 Bestseller position in its first week of release.

Helbig has been featured as one of Variety’s Top 10 Comics to Watch, Fast Company’s 100 Most Creative People in Business, Forbes 30 under 30, Hollywood Reporter’s Silicon Beach Power 25, Time Magazine’s Best Twitter feeds and BuzzFeed’s 11 Awesome Up-And-Coming Funny Ladies You Should Know.