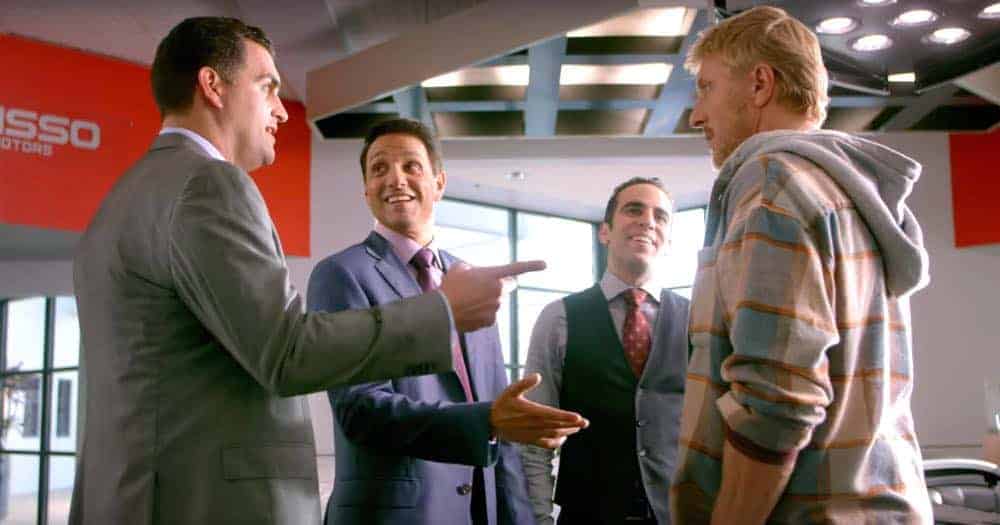 Today at the Television Critics Association session, YouTube showcased its upcoming Original series and announced renewals for 2018/2019. From ambitious projects and compelling documentaries showcasing YouTube stars, to inventive comedies, bold dramas and live events featuring from some of the biggest names in Hollywood, YouTube continues to offer innovative programming that engages its audience. Since the launch of YouTube Originals in 2015, Original content has been viewed more than 650 million times.

From the producers of The Crown and Outlander comes ORIGIN, a riveting new sci-fi thriller where a group of strangers find themselves stranded on a spacecraft bound for a distant planet. The abandoned passengers must work together for survival, but quickly realize that one of them is far from who they claim to be. The cast features an international roster of stars including Natalia Tena (Game of Thrones, Harry Potter and the Deathly Hallows: Part 1 and Part 2), Tom Felton (Harry Potter Series, Rise of the Planet of the Apes, The Flash) and newcomer Sen Mitsuji. Rounding out the cast of series regulars are Nora Arnezeder, Fraser James, Philipp Christopher, Madalyn Horcher, and Siobhán Cullen. ORIGIN is created, written, and executive produced by Mika Watkins. The series is executive produced by Andy Harries, Suzanne Mackie, and Rob Bullock from Left Bank Pictures, alongside Josh Appelbaum, André Nemec, Jeff Pinkner, and Scott Rosenberg from Midnight Radio, and Paul W.S. Anderson. ORIGIN is a Left Bank / CiTVC co-production in association with Sony Pictures Television, International Production.

WILL SMITH: THE JUMP | Debuts September 25, 2018 on Will’s YouTube channel

In partnership with Westbrook Entertainment, Will Smith is going to epic heights in his new YouTube Original, WILL SMITH: THE JUMP. The special will follow the global icon as he bungee jumps out of a helicopter over the Grand Canyon LIVE on Will’s YouTube channel on his birthday this September 25th — all to raise awareness for charity. Back in March of 2018, YouTube creators (and lifelong fans of Will) Yes Theory challenged Will to bungee jump from a helicopter – watch the challenge. Yes Theory believes if we want to build a better world together, we have to choose love over fear.

Lionized “boy bands” like *NSYNC and Backstreet Boys sold millions of records and performed to sold-out crowds of screaming young fans in the 1990s and 2000s. But behind this multi-billion-dollar, pop-idol empire was a con artist who established himself as a maverick entrepreneur and music producer. From producer Pilgrim Media Group, The Lou Pearlman Project (w/t*) reveals the dark side of stardom and the music industry as members of multi-platinum-selling bands like *NSYNC, Backstreet Boys, O-Town and Take 5 tell all about working with convicted fraudster Lou Pearlman.

Every rapper has a crew he can’t live without… and vice versa. In this new comedy starring Adam Pally (Happy Endings, The Mindy Project), Sam Richardson (Veep, Detroiters) and guest starring Jay Pharoah (Saturday Night Live, Ride Along), we see how long the crew can survive without being in the limelight. This Untitled Pally/Richardson comedy will debut exclusively on YouTube Red in 2019.

WEIRD CITY, a half-hour comedic sci-fi anthology co-created by Academy Award and Emmy Award winning writer Jordan Peele and Emmy Award nominated writer Charlie Sanders (Key and Peele). The six-episode series is an anthology set in the not-too-distant future metropolis of Weird. Each episode is an exploration of issues that pertains to present day life, stories that could only be told now through the prism of sci-fi and comedy. Special guest stars include: Sarah Gilbert, Ed O’Neill, Dylan O’Brien, Rosario Dawson, Michael Cera, LaVerne Cox, and LeVar Burton, among others.

ON BECOMING A GOD IN CENTRAL FLORIDA

ON BECOMING A GOD IN CENTRAL FLORIDA is a darkly comedic tale about the cult of free enterprise and one young woman’s relentless pursuit of the American dream. Set near Orlando in the early 1990s, the show centers on Krystal Gill, a minimum-wage-earning water park employee who will eventually scheme her way up the ranks of Founders American Merchandise: the cultish, flag waving, multi-billion dollar pyramid scheme that drove her family to ruin. The ten episode series, starring Kirsten Dunst and executive produced by Dunst and Smokehouse Pictures, will be produced by TriStar Television.

Robert Downey Jr. will bring his genuine enthusiasm and curiosity for A.I. to the screen, hosting and narrating the (untitled) series and uncovering insights from researchers and leading experts who will share their unique perspectives. The series will explore the impact of A.I. and how it is transforming the way we live and work — both now and in the future. Hosted by Robert Downey Jr., the series will feature some of the brightest minds in science, philosophy, technology, engineering, medicine, futurism, entertainment and the arts to tell the dynamic story of A.I.

The wildly-popular and critically-acclaimed hit series COBRA KAI from Sony Pictures Television and Overbrook Entertainment returns for season two. In COBRA KAI, Ralph Macchio and William Zabka revisit their star-making roles from the iconic film franchise, The Karate Kid. The epic adversaries return to the dojo, thirty years after the events of the 1984 All Valley Karate Tournament. The first episode of Cobra Kai has over 41 million views.

The critically-acclaimed supernatural thriller from Universal Cable Productions (UCP) will return for season two. In Season One of IMPULSE, Maddie Hasson stars as Henrietta “Henry” Cole, a rebellious 16-year-old girl who has always felt different from her peers and longs to escape from her seemingly quaint small town. During a traumatic event, she discovers she has the extraordinary ability to teleport — but it now makes her the focus of those who want to control her.

STEP UP: HIGH WATER, the popular dance drama from global content leader Lionsgate (NYSE: LGF.A, LGF.B) is back for another season. Since its debut on January 31, the first episode of STEP UP: HIGH WATER has generated over 24 million views. STEP UP: HIGH WATER focuses on several ambitious young dancers in a contemporary performing arts school in Atlanta. Series regulars Singer/Actress Naya Rivera (Glee) and Actor/Comedian Faizon Love (Couples Retreat, Elf) are set to return.

RYAN HANSEN SOLVES CRIMES ON TELEVISION* is set to return for a second season. The LAPD thinks it’s a good idea to form a task force partnering actors with homicide detectives so they can use their “actor skills” to help solve murders. Ryan Hansen (Veronica Mars, Party Down) plays himself in this super meta half hour comedy procedural which is as much about Hollywood as it is an action-comedy cop show.

KEVIN HART: WHAT THE FIT: SEASON 2 [RENEWAL] | Debuts in 2019 exclusively on Kevin’s LOL Network on YouTube

Kevin Hart is returning with even bigger punch lines and celebrity guests. In partnership with Lionsgate and Laugh Out Loud Network, this second season will raise more awareness of healthy living and wellness, as Kevin and his celebrity friends, like Jennifer Garner, Pete Davidson, Anna Kendrick, Rebel Wilson and more, try out some of the most unique and outlandish workout routines.

In the third season of Mind Field, creator/host Michael Stevens takes us on an even deeper dive into the mysterious depths of the human psyche. Working with top universities and cutting-edge research labs, Michael travels the world to explore the latest frontiers in psychology and neuroscience through groundbreaking demonstrations that test the powers and limits of the human mind.

Five months after they return from Beach Island, the seniors have already graduated and its the last summer that the Foursome is going to be together. Foursome stars Jenn McAllister (All Night), Rickey Thompson (Betch), Cameron Moulene (Faking It), Monica Sherer (Betch), Rahart Adams (PACIFIC RIM: UPRISING), John Milhiser (Saturday Night Live), and Maddy Whitby (Betch). Foursome is produced by AwesomenessTV.