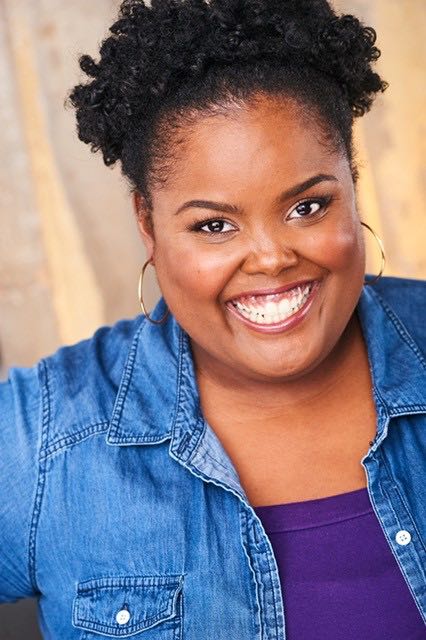 As an actor, there are roles that will touch your life and remind you that all the hard work is worth it. For Danielle Pinnock, she has discovered she has been blessed with a number of them in her career. Most recently, she struck gold getting to portray one of Sheldon’s teachers in the CBS comedy YOUNG SHELDON. Danielle’s natural warmth and desire to enjoy the roles she portrays adds an extra layer to her characters. She is also fearless in her comedy, as if she believes that life is worth loving and laughing. In an exclusive interview, Danielle shared a bit about her work on YOUNG SHELDON and reflected on her role on GET SHORTY and key lessons she has learned as a working actor.

What was the initial appeal for you about portraying Ms. Ingram and working on CBS’ YOUNG SHELDON?
DANIELLE: Ms. Ingram has been the greatest role I’ve received in my career. She is so quirky, no nonsense and a joy to portray on CBS. I also love getting to work with Chuck Lorre, Steve Molaro and the amazingly gifted Iain Armitage.

How would you describe your character and how she figures into Sheldon’s young life?
DANIELLE: Ms. Ingram is Sheldon’s math teacher. Sheldon is the first child genius Medford High School has ever accepted and it’s a huge learning curve for all of the teachers. He is so brilliant and is constantly correcting Ms. Ingram’s math in front of the classroom.

What do you most admire about her?
DANIELLE: I love that Ms. Ingram is a mathematician. I am horrible at math in real life and I think it’s so cool to play a character that is so different from me.

What is it like working alongside the talented ensemble on YOUNG SHELDON?
DANIELLE: It’s been a dream come true. The cast has been on some of my favorite television shows: BIG LITTLE LIES, THE COMEBACK and THE FAMILY. I was star struck at the first table read and meeting Jim Parsons was the cherry on top. Working on that set is like working with family. The actors are amazing and so down to earth.

Were you familiar with the series THE BIG BANG THEORY. How did it feel to be invited to be a part of “THE BIG BANG THEORY/YOUNG SHELDON universe?
DANIELLE: Absolutely! Kunal Nayyar went to my college, Temple University. I’d been watching THE BIG BANG THEORY for years. I knew this show was going to be a hit because the creators, Chuck Lorre and Steve Molaro, have the Midas touch! This entire experience has been life changing.

Portraying Sheldon’s teacher, you get to work with Iain Armitage. What is that experience like?
DANIELLE: Iain Armitage is a star. He is the most gifted young actor I’ve ever worked alongside. I learn so much from him on set and we have a blast working together.

Any favorite scenes that you can share from working on the show?
DANIELLE: My favorite scene has to be in the teachers’ lounge. All of the teachers share a bottle of Bourbon whilst complaining about Sheldon and it is so hilarious.

The show is made up of a bunch of amazing comedy actors. Do you find it hard to keep a straight face working on the show?
DANIELLE: YES! I am always laughing during takes. I feel so bad, but the young actors on the show are so funny and come up with the most brilliant comedic choices. I also love working alongside the teachers. Doc Farrow, Valerie Mahaffey, Brian Stepanek and Rex Linn are a RIOT!

Has YOUNG SHELDON left an impression on you in your life? If so, in what way?
DANIELLE: YOUNG SHELDON is the number one comedy in the world. So many people have been coming up to me randomly in grocery stores, at the gym and at parties like: “Oh my God! You’re Ms. Ingram.” I’ve never been a part of a project this special in my entire life and I’m beyond blessed to be in this show.

Then as an actor, what has been the one thing you haven taken away from the experience of working on YOUNG SHELDON?
DANIELLE: YOUNG SHELDON was my first guest star recurring credit in Los Angeles. This job came after auditioning for over 25 pilot auditions and I wanted to move back to Chicago. YOUNG SHELDON gave me the confidence I needed to stay in L.A. My proudest moment has been to watch the show with my mother. My mom raised me by herself and to see the excitement on her face on Thursday nights makes my heart swell with pride.

You also appear in the EPIX series GET SHORTY. What can you share about your role as Pamela in GET SHORTY?
DANIELLE: Nurse Pamela takes care of Rick’s (played by Ray Romano) father who is a legendary director. She has a love-hate relationship with Rick because he never pays her on time. Peter Bogdanovich plays Rick’s father and to be on set with him has been my greatest joy. He is iconically know for directing Paper Moon, Noises Off and many other legendary films. He is so funny and we all just have a blast on set. Hearing all of his stories about films he’s worked on is my favorite part of being on the Get Shorty set.

What has surprised you most about your career so far?
DANIELLE: To be honest, working with Viola Davis and Kerry Washington on SCANDAL. Linda Lowy gave me the biggest surprise of my career during the Christmas holiday. These women are on my vision board and I was so honored to be in one of the most iconic episodes in television history.

At this stage of your career, what do you think you have learned from the roles and projects you have worked on?
DANIELLE: The greatest lesson I’ve learned on set is that humility and generosity will take you far in this industry. I’ve had the honor to work alongside legends such as: Viola Davis, Kerry Washington, Peter Bogdanovich, Ray Romano and more. Not only are these stars stellar performers, they are the most gracious human beings on the planet.

Then what are the perks of where you are in your career right now?
DANIELLE: I am able to pay my bills on time and help other artists by donating to their projects.

Has there been any great advice you have gotten about working as an actor?
DANIELLE: Create your own work.

What advice would you offer to other upcoming and aspiring actors?
DANIELLE: You are enough. For many years in my career, I felt like I wasn’t good enough and had extremely low self-esteem as an actor. I didn’t go to the top graduate program in the United States, and felt like I was missing out. I had to discover my own gifts by creating work for myself. Your uniqueness and quirks will get you very far in this industry. Never believe anyone who tells you any different.

At a time when women’s voices are rising to be heard and respected around the country and world, what do you recommend your fans do to lend support in that endeavor?
DANIELLE: Never be afraid to speak your truth. Your truth has power and should never be silenced.

Do you have any other upcoming projects that you can share that fans should keep an eye out for?
DANIELLE: Yes, I am the co-creator of the digital series Hashtag Booked and the episodes are live on Instagram. I am also contributing essays for Shondaland. My most recent essay, “Snatched Edges,” deals with natural hair textures and unqualified hair and makeup stylists on set.

To see more of Danielle’s fun performances, you can watch for her appearing in the the second season of YOUNG SHELDON on Thursday nights this Fall on CBS, and definitely keep watch for her in the return of GET SHORTY for Season 2 coming in August on EPIX. To see preview clips and get information on both shows, you can follow them on Twitter @YoungSheldon and @GetShorty. You can also see what is upcoming for Danielle as she pursues her growing career on Twitter and social media @bodycourage and at her website: https://bodycourage.com/