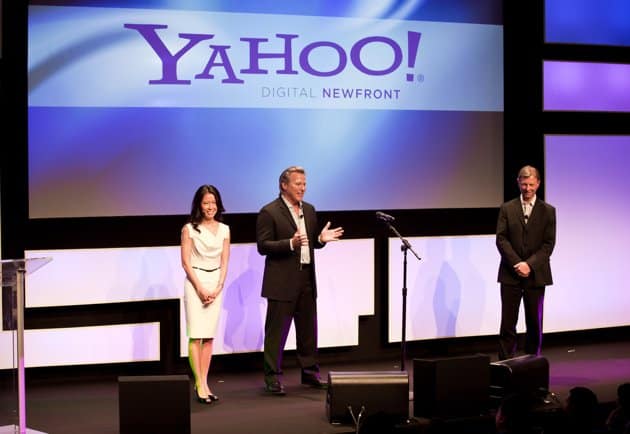 A four-inch-tall crime fighter, a pair of Hollywood starlets who abuse their personal assistant, and a celebrity who explores the “first times” of fellow stars — those are just a few highlights of the new programs Yahoo! is unveiling tonight at its Digital Content NewFront in New York. In a star-studded event that will feature Ed Helms, Zachary Levi, John Stamos, Morgan Spurlock, Cheryl Hines, Rachael Harris and others, Yahoo! is announcing its new lineup of video shows, new partnerships to expand content offerings, and new opportunities for advertisers to be at the center of users’ daily habits. The night will be capped by a special performance from The Lumineers, with a live stream of the 30-minute set on Yahoo! Music.

“Yahoo!’s unique mix of content and technology leads not only to powerful and personalized experiences for our users, but also to greater distribution for our partners and higher return for our advertisers,” said Henrique de Castro, chief operating officer, Yahoo!. “What we’re showing tonight signals where Yahoo! is headed: beautiful product experiences, exciting new content, big partnerships with the largest media brands, and extraordinary new ad experiences.”

“In the last year, we have more than doubled the original video programming on Yahoo! to become one of the Web’s largest content publishers,” said Erin McPherson, Yahoo! vice president and head of video. “The new shows and partnerships we’re announcing at Yahoo!’s NewFront demonstrate how we are building scale, reaching more targeted audiences, and innovating with content.”

·         “Tiny Commando” — Ed Helms created and stars, along with Zachary Levi, Gillian Jacobs, and some of the biggest names in comedy, in the Principato-Young Entertainment production, “Tiny Commando,” an action-packed series following a four-inch-tall private investigator who uses his awesome fleet of vehicles to fight crime.

·         “We Need Help” — In Vuguru’s “We Need Help,” creators, producers and stars Cheryl Hines and Rachael Harris exploit their shared personal assistant in the series produced by Principato-Young Entertainment and Steve Carr, and directed by Hines.

·         “Fashion Recipe” — Celebrity stylist Brett Alan Nelson shows you how to get the most from one particular article of clothing.

·      “Grill Girls” (working title) — A new grilling show featuring Chef Megan Mitchell sharing her grilling secrets and tips for everything from steaks, to peaches and pizza.

Yahoo! will program its new Fall comedy lineup — including previously-announced shows, “The Fuzz” from Vuguru, and “Ghost Ghirls” from Shine America and Electric Dynamite — in a new way for the company. Based on insights from user data, Yahoo! is making all episodes available at once in a “binge-viewing” format, providing viewers with premium programming options beyond traditional TV.

Yahoo! and WWE Tag-Team Video Distribution
Yahoo! will be the premiere global video distribution partner for WWE, with a dedicated hub on Yahoo! for all WWE content. Beginning summer 2013, the following WWE content will be available on Yahoo! globally:
·         Monday Night Raw pre-show: A 30-minute pre-show to each new Monday Night Raw will be exclusive to Yahoo!.
·         Original programming: Two weekly series of 50 episodes per year will be produced exclusively for distribution on Yahoo!.
·         Premium archive: Yahoo! will have exclusive access to WWE archives of historical full matches, shows, highlights and other events.
·         Additional live events: Yahoo! will air live, pre-show content for every pay-per-view event.
·         Clips from current TV programming:  Clips from all WWE television programs will now be available on Yahoo!.

ABC News and Yahoo!: Phase Two
The Yahoo!-ABC News Network, the #1 source of news and information online, is excited to announce the next phase of their partnership, which first launched in October 2011. Three of ABC News’ top franchises – Nightline, World News With Diane Sawyer, and Good Morning America – are coming to Yahoo! as unique, daily, digital-native extensions.
·         “World News Beyond the Headlines” — Diane Sawyer and a team of world-class correspondents tell you what you didn’t know about the news of the day. Each day they’ll deliver that extra, interesting nugget. The show will also feature popular franchises such as Person of the Week.
·         “Nightline: Online” — A smart take on the news stories that start conversations.  On a daily basis, the team will provide exclusive, first-look content to the Nightline community, on topics ranging from entertainment to pop-culture trends, to breaking news and international exposés.
·         “GMA Live” — GMA Live kicks into full swing in front of a live studio audience, every weekday morning. This digital-only show continues the morning conversation with segments like GMA Rewind, the Play of the Day, EXTRA, and Exclusive Deals.

Yahoo! Finance and CNBC: “Talking Numbers”
Yahoo! Finance and CNBC will debut their third original co-production, “Talking Numbers.” This new incarnation of “Talking Numbers,” originally a successful franchise on CNBC’s Closing Bell, will bring the best of broadcast to an unmatched audience online. Debuting in May, “Talking Numbers” takes a 360-degree approach to trading, highlighting the best investment opportunities by analyzing stocks from both a technical and a fundamental point of view. The ultimate goal: teach viewers not just what to buy, but how to buy, by harnessing both technical and fundamental data points so they can become better investors. Together they have created compelling content including shows such as Off the Cuff and Big Data Download.