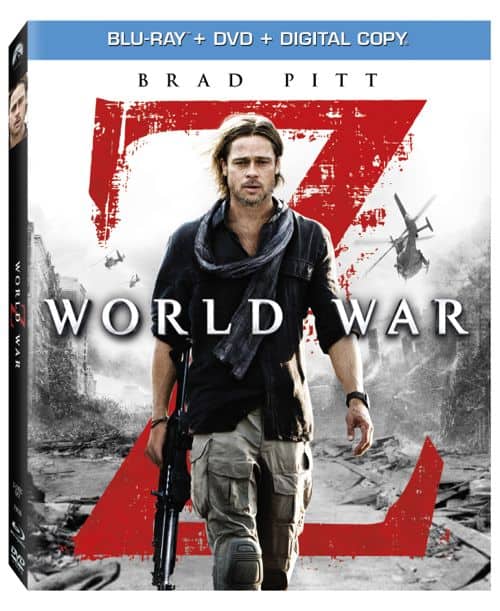 Seat42f and Paramount Home Entertainment have teamed up to give TWO lucky winners a copy of WORLD WAR Z on BLURAY and one grand prize winner a Mirielle Enos/James Badge Dale signed copy of WORLD WAR Z on BLURAY . For a chance to win leave a comment below telling us why you want to add WORLD WAR Z to your BLURAY collection. Only one entry per person. Contest ends September 24th. Winners will be notified on September 25th via email so make sure to use a valid email address when you post your comment.

“The suspense is killer!” (Peter Travers, Rolling Stone) in the fast-paced, pulse-pounding epic WORLD WAR Z, debuting on Blu-ray, Blu-ray 3D™, DVD and On Demand on September 17, 2013. The pandemic begins one week early on Digital September 10th. Due to overwhelming demand, the film has been digitally re-mastered into the immersive IMAX® 3D format and will be released in select IMAX theaters domestically for an exclusive one-week running beginning today.

Starring international superstar Brad Pitt and based on the best-selling and wildly popular novel, WORLD WAR Z took audiences by storm and was hailed by critics as “thrilling, epic and spectacular” (Owen Gleiberman, Entertainment Weekly) and the “most gratifying action spectacle in years!” (David Denby, The New Yorker). The tense and thrilling film follows a former United Nations investigator (Pitt) as he helps stop the chaotic pandemic that has gripped populations around the world. WORLD WAR Z features stunning visual effects and edge-of-your-seat action and suspense that take the Zombie apocalypse phenomenon to a more extreme and electrifying level.

“I’m really excited for fans to see the new unrated version of WORLD WAR Z on Blu-ray,” said producer and star Brad Pitt. “We were thrilled with the audience response to the film in theaters and wanted to give viewers even more of the action and intensity that they loved when they watch the film at home.”

WORLD WAR Z will be available on Blu-ray Combo or Blu-ray 3D Combo with an Unrated Cut packed with even more thrills and action too intense for theaters, along with the theatrical version of the film. The combo packs feature UltraViolet™ and boast in-depth looks at the making of the film, the seamless blending of practical and digital effects, the science behind the Zombie outbreak and much more. The film will also be available as a single-disc DVD.