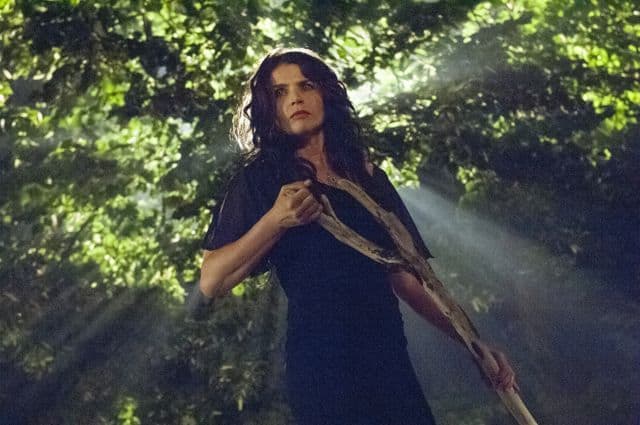 It’s hard to write a review of Lifetime’s WITCHES OF EAST END “Pilot” without spoilers, though I’ll try to do my best. That’s because this is a slow-burn first episode, introducing us to various characters, and only late in the hour revealing what’s really going on in the story. I like this structure, giving us a taste of the people before the drama starts, even if the episode itself seems so-so, which is my prediction for what the series will be.

We are early on introduced to two sisters, Ingrid (Rachel Boston, In Plain Sight) and Freya (Jenna Dewan-Tatum, American Horror Story: Aslym) Beauchamp, who love each other, but are quite different. Both are interested in witchcraft, spells, and mental abilities. But while Freya worries her dreams have significance, Ingrid takes a more academic approach, curious about how magic fits in the culture, but skeptical as to its existence. Little do they know, they are both about to be thrust into the realm of witches.

Yes, the Beauchamp family is a coven of witches, a development that happens late in the “Pilot,” but one I feel comfortable giving away based on the title and premise of the series. You see, their mom, Joanna (Julia Ormond, Mad Men) is a very old witch, cursed with being an immortal mother. I won’t get into what this means, as the backstory is a heartbreaking twist that’s pretty cool, but she has decided to not tell Freya and Ingrid about their heritage in the hopes of giving them better lives.

Joanna’s sister, Wendy (Madchen Amick, Californication, Gossip Girl), long estranged, comes to town because she thinks Joanna and the girls are in danger. This is not welcome news to Joanna, who tries to ignore it until it becomes obvious Wendy is right. This all leads to a startling climax that makes the four women at the center of the tale re-evaluate themselves and their family.

The turns the plot takes are pretty good. I like the concept and the cast. There are a lot of other shows on the air right now with witches and the like, but this does seem to be a slightly different take, and with better actors than the most similar program that springs to mind, The Secret Circle.

But WITCHES OF EAST END airs on Lifetime, which proudly proclaims itself television for women, and is known to be overly soapy and sentimental. This brand shows through in the series, too, providing scenes between both pairs of sisters that seem more designed to satisfy the target audience for the network than because they are necessary to the story. This is where the weakness shows.

A subplot in the “Pilot,” in which Ingrid gamely tries to offer hope to her friend, Barb (Kellee Stewart, My Boys), who is having trouble getting pregnant, by casting a fake spell from the internet with the help of co-worker Hudson (Tom Lenk, Buffy the Vampire Slayer), is a little too on-the-nose. I’d like to see more about Ingrid’s life away from her family, but does her bit have to be so blatantly about pregnancy? It comes across as cheesy and insincere.

Another problem with the show is the lack of depth for the male characters. Ingrid’s love interest is Adam (Jason George, Grey’s Anatomy). Adam is a cop who would “do anything” to get close to Ingrid, but when a crime points to one of Ingrid’s relations (I won’t spoil the details), Adam just does his job, not worrying about his personal stake in the situation or Ingrid’s feelings.

Freya has two love interests, Dash (Eric Winter, Brothers & Sisters), the man she is going to marry, and his brother Killian (Daniel DiTomasso), who shows up in her dreams even before she meets him. They both offer her different things, and somehow she is juggling the two so far, a lady’s fantasy. Presumably there will be a break in this at some point, but whichever one Freya picks, it’ll still surely be a happy ending.

Virginia Madsen (Sideways, Hell on Wheels) co-stars as the boys’ mom, adding another great name to the roster.

Given the credits of the cast, I applaud Lifetime for drawing some reputable performers who have been in well-respected shows recently, and are not past their prime. But I worry the material is too mediocre to bring in anyone outside the network’s normal viewership. That might be all right, as the station seems to do OK for itself, but with a witch concept, put on air at a time when creatures of the night have never been more popular, there is the potential to expand and draw more people to Lifetime. WITCHES OF EAST END will likely fail to accomplish that.

ONCE UPON A TIME Review Season 3 Episode 2 Lost Girl