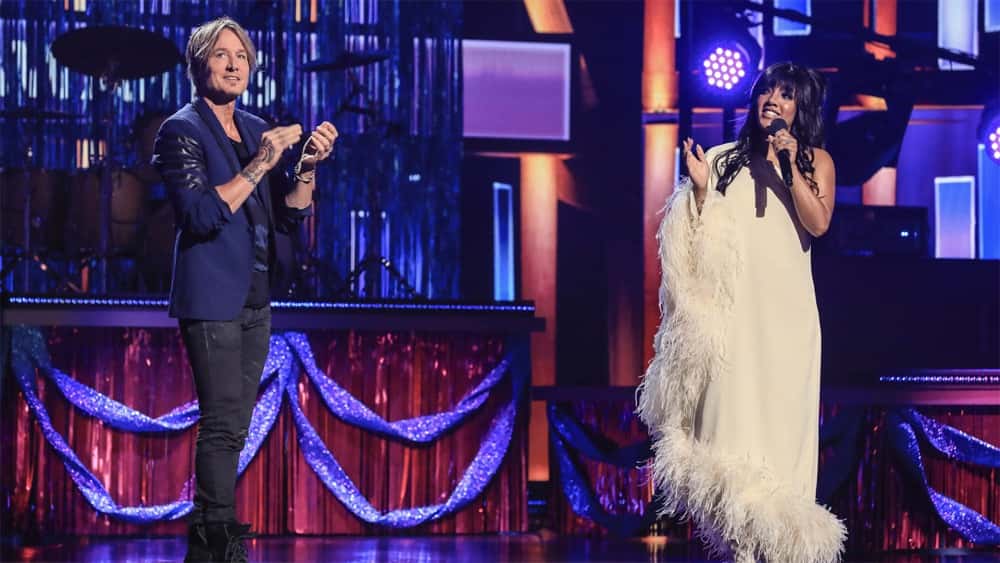 Winners have been announced for the 56TH ACADEMY OF COUNTRY MUSIC AWARDS™. Keith Urban and Mickey Guyton hosted the show featuring three iconic Country Music venues: theGrand Ole Opry House, Nashville’s historic Ryman Auditorium and The Bluebird Cafe, as well as performances at legendary locations across the city including the Station Inn, Bridge Building and on Broadway. The 56th ACM Awards was broadcast live on CBS and is available on demand on Paramount+.

Show performance highlights included:
●      Kicking off the show, Miranda Lambert and Elle King rolled up to the Grand Ole Opry House in style, wearing fringe-laced black leather motorcycle jackets and taking over the stage with the world television premiere of their party anthem, “Drunk (And I Don’t Wanna Go Home).”

●      Thomas Rhett performed “Country Again” and followed up with the premiere of “What’s Your Country Song.”

●      Chris Stapleton performed “Maggie’s Song” and was joined on The Bluebird Cafe stage by Miranda Lambert.

●      Married artists, Maren Morris and Ryan Hurd sang, “Chasing After You,” for their first duet together and Hurd’s television award show performance debut.
●      Lady A rocked Nashville’s Bridge Building with their song “Like a Lady,” and Ashley McBryde performed “Martha Divine.”

●      Jimmie Allen was surprised by Brad Paisley for a duet of “Freedom Was a Highway,” while New Female Artist of the Year Gabby Barrett performed her single “The Good Ones” from the intimate Bluebird Cafe.

●      Dierks Bentley and duo The War and Treaty performed U2’s poignant classic “Pride (In The Name of Love)” at The Station Inn.

●      Introduced by the legendary Dolly Parton, Carrie Underwood performed a medley from her new album of gospel hymns, “My Savior,” starting with “Amazing Grace” and featuring a duet with CeCe Winans to sing “Great Is Thy Faithfulness” and “The Old Rugged Cross.” To finish the set, they were joined by the Belmont University Choir for “How Great Thou Art.”

●      Eric Church gave an energetic performance of his song “Bunch Of Nothing” at the Ryman.

●      Dan + Shay debuted their latest release “Glad You Exist” from the Bluebird Cafe with a smooth acoustic ballad performance.

●      Backed by a socially-distanced string orchestra, Luke Combs gave a passionate performance of “Forever After All” from the Grand Ole Opry House.

●      Most nominated and awarded ACM Artist, Miranda Lambert also performed and played along with her guitar to “In His Arms” with Jack Ingram and Jon Randall.

●      Kenny Chesney returned to the ACM Awards stage for the world television premiere of “Knowing You.”

●      The Academy also paid tribute to the lives lost in the Country community during the past year.

●      Alan Jackson performed two back-to-back hits, a special mashup of “Drive (For Daddy Gene)” and “You’ll Always Be My Baby.”

●      Blake Shelton celebrated the 20th anniversary of his first single “Austin,” and followed up with a performance of his latest single “Minimum Wage.”

●      Following their double win with Single of the Year Award and Music Event of the Year, Carly Pearce and Lee Brice performed their collaborated song “I Hope You’re Happy Now.”

●      Kelsea Ballerini and Kenny Chesney gave a touching performance of “half of my hometown” to honor their shared hometown of Knoxville, TN.

●      After performing, “I’m Not For Everyone,” at the Ryman, Brothers Osborne closed out the show with a heart thumping performance of “Dead Man’s Curve.”

●      Chris Stapleton won Album of the Year, with an additional win for producer for “Starting Over.” Stapleton has had twelve ACM wins overall.

●      Old Dominion won Group of the Year, making this their fourth consecutive win.

●      The late producer busbee was awarded posthumously with Single of the Year and Music Event of the Year.

During the live telecast, ACM Lifting Lives® the charitable arm of the Academy of Country Music® featured special bumpers which included the National Museum of African American Music during Black History Month to learn more about Country Music’s roots, check out the moment here. Jimmie Allen, Chrissy Metz, Kip Moore and Tenille Townes sat down with Ashley Eicher to discuss how the ACM Lifting Lives COVID-19 Response Fund has and continues to support music industry professionals who have been financially impacted by the pandemic, watch here. ACM,Ad Council and COVID Collaborative along with Eric Church, Ashley McBryde, Darius Rucker were featured in a COVID-19 vaccine PSA as part of the national campaign, “It’s Up to You,” to emphasize the important role education about COVID-19 vaccinations plays in returning to live music here. Additionally, Dolly Parton was also featured in a vaccine PSA here. Official 56th ACM Awards Playlist: Stream for a Cause initiative to benefit the ACM Lifting Lives COVID-19 Response Fund is available on Amazon Music, Apple Music, Pandora, Spotify, Tidal andYouTube Music.

Studio Recording Awards and Songwriter of the Year will be announced at this year’s ACM Honors, more information to be announced in coming weeks.

Following is the full list of winners in the 12 categories voted on by Academy members:

ENTERTAINER OF THE YEAR
Luke Bryan

DUO OF THE YEAR
Dan + Shay

GROUP OF THE YEAR
Old Dominion

The health and safety of the artists, fans, industry, staff and partners involved in the ACM Awards is the number one priority. All guidelines set forth by national, state and local health officials will be closely followed and implemented during the production along with additional safety measures to be instated by dick clark productions and the Academy of Country Music.